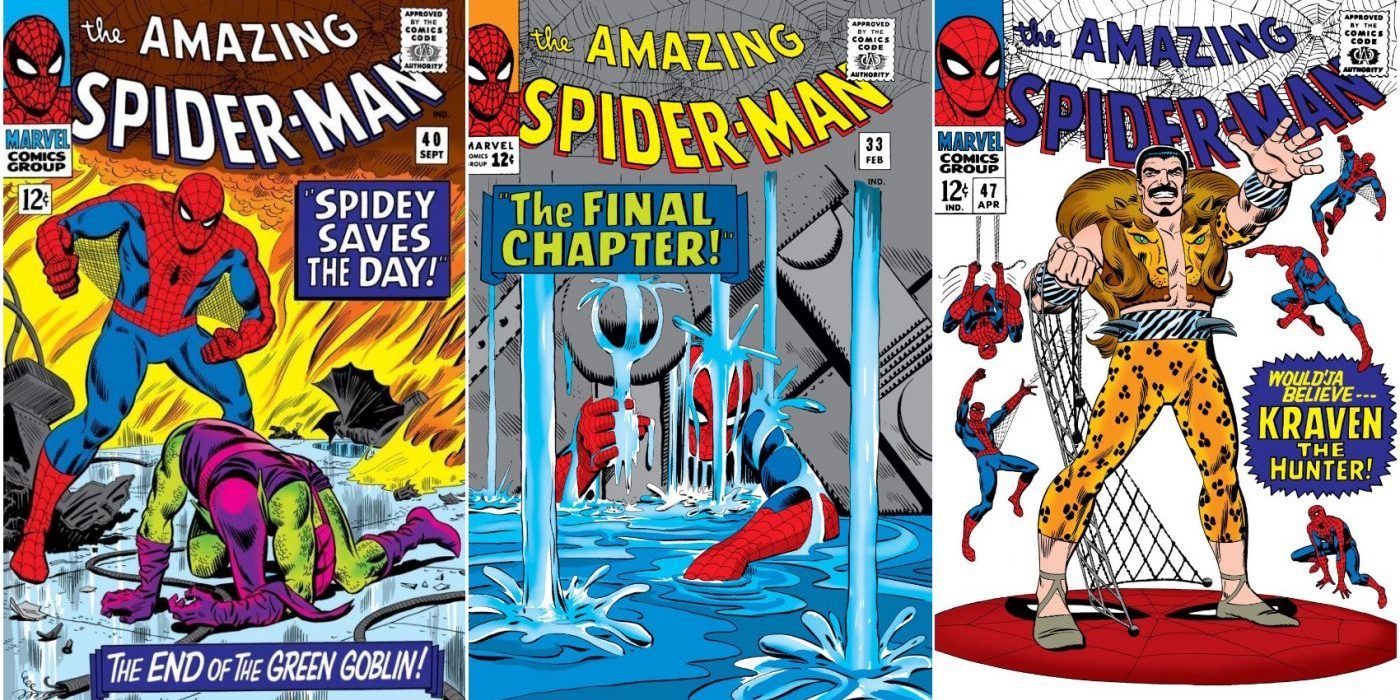 The 1960s were a boom time for superheroes. Millionaire detectives, aliens, and fantastical families were becoming household names. The comic was becoming an art form. As more titles flooded the shelves, a hero arrived who Really highlight.

Spider-Man was not the macho, confident protagonist that people had seen before. A mild-mannered high school student, he was the common man in a headquarters of larger-than-life characters. The combination of Stan Lee’s writing talents with the artistry of Steve Ditko and John Romita Sr. created one of the richest works in comic book history.. Many of his titles around this time would cement his legacy and provide villains that will endure for years to come.

With the release of the first issue of Spider-Man, Marvel was still a bit unsure of how successful it would be.. They used the recent success of the Fantastic Four to add some security. Nevertheless, it was also a cool move that would establish the wall-crawler perfectly.

His complaints with the Fantastic Four were a great way to show how different he was from other superheroes.. It showed his strange and lonely character. By the end of the issue, he had dropped out of the first superhero team. By adding a street-level villain in the form of Chameleon, Spider-Man had the perfect setup as a common man-style character..

There are some covers that become legendary and issue 33 is one of them. Released in 1966, the cover shows Spider-Man trapped under a mound of debris, with water cascading over his body. It is a scene that would be revised and reproduced numerous times in the coming years.

The cover sums up the issue itself, as Peter Parker carries the literal weight of the world on his shoulders. Interestingly, the story does not feature any real villains. It’s a story of Peter Parker coming to terms with the guilt he felt for Uncle Ben and saving his Aunt May from illness.

When Spider-Man hit a 50 number milestone in 1967, it was okay to do something to mark the occasion. However, in true Stan Lee fashion, it would be Peter Parker’s own troubles that would mark the anniversary.

The relentless diatribe of the Daily Bugle has turned the public against him. Aunt May is sick and Parker is too tired to check his exams. All of this leads to an episode in which Peter shuns his duties as Spider-Man. Crime increases in the city and a mysterious figure known as the Kingpin arrives at the Daily Bugle.

7 Face to face with the lizard

The sixth issue was a real highlight in the early comics. It featured Curt Connors, a humanoid lizard with a Jekyll and Hyde type of character. His personality and story were very similar to Peter Parkers. It allowed Stan Lee to play with the moral compass theme established in previous issues. It also showed what could have happened to the wall-crawler if things had turned out differently.

Steve Ditko cover perfectly encapsulates the story. For the first time, Spider-Man it shows totally unbalanced and hesitant. The contrast between the primary colors of his uniform and the Lizard’s wicked purples and greens tell a story without words..

Possibly Spider-Man’s main nemesis, Doctor Octopus arrived at issue # 3. a number of changes throughout its history, this theme showed it at its best. Shrouded in shadow, its tentacles have a huge, primitive quality. We can see the green jumpsuit that would be a staple for years to come.

Spider-Man’s first encounter sees him beaten up by Otto Octavius. Again, this would set the scene and build a foundation for the character. After this meeting, Dr. Octopus would always believe that he was superior to Spider-Man. He would even turn into Spider-Man at one point.

5 Duel to the death with the vulture

Duel To The Death featured not just one Spider-Man villain but two. We not only meet The Vulture, but we also take a look at The Tinkerer. Vulture would constantly return to plague Spider-Man for years to come. The Tinkerer, however, would be responsible for equipping some of his most deadly foes.

Unlike many covers of the era that opted for large panels of text over the action, this cover is quite stylish. Steve Ditko uses his tactic of placing red primary colors on Spiderman and in the sky, then frames the villain in a vivid green suit.

4 In the hands of the hunter

Kraven the Hunter had appeared in the pages of Spider-Man comics prior to this issue. Nevertheless, it was not until this comic that began to develop from the one-dimensional character previously portrayed. Trouble sees Spider-Man caught between a rock and a hard place, while Kraven pursues Norman Osborn. It is up to Spider-Man to try to stop him.

RELATED: 10 Marvel Adaptations That Look Nothing Like The Comics

John Romita’s cover forgoes action for a minimalist take. Kraven is in the center, with Spider-Man in a variety of poses around him. Not only does it feature a matching cover, the inside pages also feature some great Mary Jane sixties dances.

3 Never step on a scorpion

Never Step On A Scorpion wasn’t the first appearance of Spider-Man’s green-tailed foe. However, it would be his last until he revived at issue # 145. Part of that may be due to the fact that at the time, the Scorpion stories were getting pretty stale.

Mac Gargan escapes from jail and attempts to pursue his revenge against J. Jonah Jameson. Spider-Man would be caught in the crossfire. Fortunately, your temporary firing has this excellent cover. It featured a partially submerged couple, struggling while out of their depth.

While the Green Goblin had been a persistent thorn in Spider-Man’s side, his identity remained a mystery. All of that came to a head with issue 40, when he was revealed as Norman Osborn. Much of the problem serves as its backstory and its secret origin.

The problem ends with another moral dilemma for Spider-Man. The Green Goblin has been a criminal threat, apparently he does not remember his actions. Should Peter turn him in to atone for his actions? Or will he set him free for the sake of his friend Harry?

Although not strictly a Spider-Man title, Amazing Fantasy 15 has to be on the list of iconic Spider-Man covers. The title was a revolving door of stories and was scheduled to be canceled after this issue. As this was the case, it was decided that something different could also be tried.

That was the webhead, and the rest is history. His truly amazing backstory is contained within the pages. It includes everything from Parker’s wrestling career to Uncle Ben’s death. The cover art is so iconic that it has been parodied multiple times by everyone from Deadpool to Pinky and the Brain.