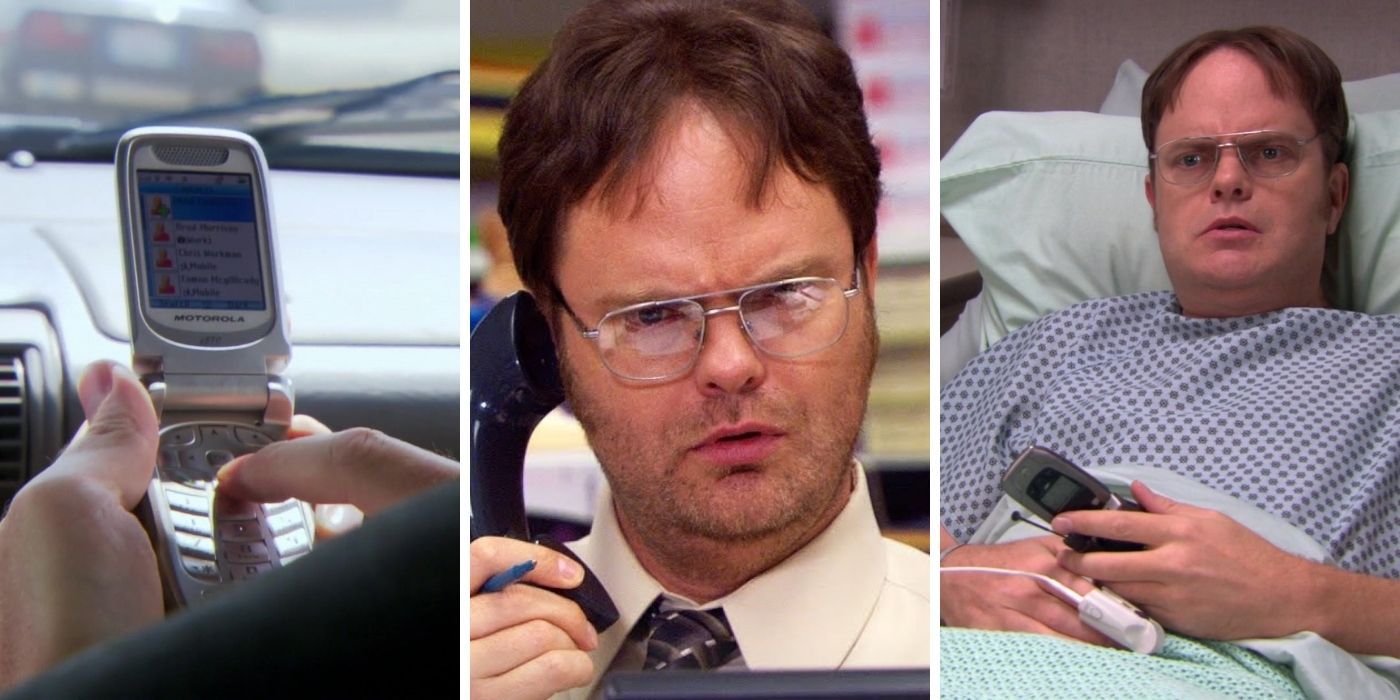 Dwight Schrute is one of the top sellers for Dunder Mifflin Scranton. Although he only sells paper, he is passionate about what he does and revolves his life around it. No matter how many times Jim messed with him or how often he was underestimated, Dwight stayed at Dunder Mifflin because he loved it.

Through the years, The office Fans have seen Dwight make a lot of phone calls. From sales calls to personal calls, nothing with Dwight seems to be normal. His phone calls always have a pang of aggression and heat, but that’s part of what makes fans love Dwight Schrute.

10 “Our prices have never dropped!”

In an attempt to provide sales call training, Michael had Jim and Dwight role-play in the conference room. With the phones in hand, Jim was the customer and Dwight the salesperson. Jim being Jim, he played a joke on Dwight and said his name was Bill Buttlicker. He treated Dwight roughly as a way to agitate him more. Dwight broke out in a sweat because he was losing this fake sale. He tried to be endearing over the phone, but went south. Michael finally had to step in to show him how it was done.

In the opening of “The Fight,” Jim overheard Dwight talking on the phone with someone who was not related to Dunder Mifflin. Jim immediately stopped what he was doing to listen to what Dwight was saying. “Sensai, hi, this is Senpai” he said.

RELATED: The Office: 10 Times Jim and Dwight Were Best Friends

Dwight had a question, but seemed interrupted on the other end of the phone. When Dwight hung up, Jim knew instantly that he needed more information about Dwight’s extracurricular activities outside of the office.

When a radio host, Iris Black, wanted someone from Dunder Mifflin to do an interview on local business issues, Dwight jumped at the opportunity. However, Black canceled the interview shortly after when another story came out.

The office decided to keep Dwight in the dark and let him think they were still interviewing him. Instead of Black asking the questions, Nellie changed her accent and led Dwight through a series of questions that only intensified as the interview continued. By the end of the interview, Dwight was half dressed and had the impression that he saved the company from falling stock prices.

7 “Please, you must do one thing: kill Mose before he kills you.”

In “Tallahassee,” Dwight will do anything to look like a standout for Nellie and become the new vice president. Sadly, he suffered from a stomach ache while in Florida.

The pain was deep enough to make Dwight pass out. When he woke up he was on a stretcher going to the hospital. Before leaving, he left a memo for Philip and told him to “kill Mose before he killed [him]”because he was the rightful heir to Schrute Farms.

6 “So it looks like you are too sick to go to work, but you are well enough to go to the pharmacy.”

When Oscar reported ill, Michael and Dwight suspected that he was not ill at all. Being sick on a Friday was a coincidence. Dwight set out to get to the bottom of Oscar’s “lie.” She called him every two minutes to make sure he was home. In a phone call, he even wondered how he was well enough to go to the pharmacy but not to work. It all started to boil when Dwight went to Oscar’s house to catch him red-handed.

5 “And make sure you go down and see the world of Harry Potter!”

In season seven, Todd Packer returned to the Scranton branch when his time as a street vendor came to an end. The only problem was, no one could stand Packer, he even took Dwight’s desk! To make Packer leave Scranton for good, Jim and Dwight teamed up to get him out of town.

They pretended to be someone from the company and offered him a job in Florida. Packer took the bait and left Scranton for his fake job in Florida. It was a lot of fun watching Jim and Dwight team up for this phone call.

In “The Search,” Michael was left behind at a gas station and ended up lost in Scranton without his wallet or phone. Dwight, Erin and Holly teamed up to bring him home.

Meanwhile, Dwight called the office to see if Michael signed in, but hadn’t. Before hanging up, Pam asked him to stop at the store and grab a few things before heading back to work. He hysterically told her it was not a shopping trip, but a “search and rescue mission.” Adorably, before hanging up she told Pam that she would get her what she needed, that it was a sweet moment in their friendship.

3 “This man is an imposter! Don’t do business with him!”

One can only imagine how much money and time Jim spent playing a prank on Dwight. If you worked as hard at work as you did when you pranked Dwight, it is unknown where you would be in your career.

In one scene, Dwight’s phone rings, but when he answers the call, no one is there. Jim suddenly answers the phone on his Bluetooth device, proving that he played with the settings so that only he could answer Dwight’s phone calls. While Jim was on the line, Dwight yelled into the phone that Jim was an imposter. It’s funny how tense he got over a silly joke.

In “Health,” Michael couldn’t handle the pressure of choosing a medical care plan for the office. Instead, he hired Dwight to make the decision on his behalf. As usual, Dwight took his duty too far and asked inappropriate questions to find out which health care plan was best. When Jim gave him false illnesses, Dwight called Jan to ask permission to fire him. Jan was furious that Michael gave Dwight this duty and reaffirmed that he did not have the means to fire anyone.

one “Ugh Jim, I’ve given you this information like 20 times.”

In the open cold of “The Fight,” Dwight walked into the office and discovered that his desk was missing. Jim eventually played a game of Hot and Cold to help Dwight find his desk, leading him to the bathroom. Lo and behold, in the bathroom was Dwight’s desk, neatly arranged as it was in the office.

When Dwight sat down to answer the phone, Kevin emerged from a stall with a candle in hand. Meanwhile, Dwight told Jim what he was looking for over the phone before hanging up to tell Kevin to wash his hands.

NEXT: The Office: 10 Characters Who Left The Show Too Soon


Next
Golden Girls: 5 Characters Who Were Smarter Than They Appeared (& 5 Who Weren’t)