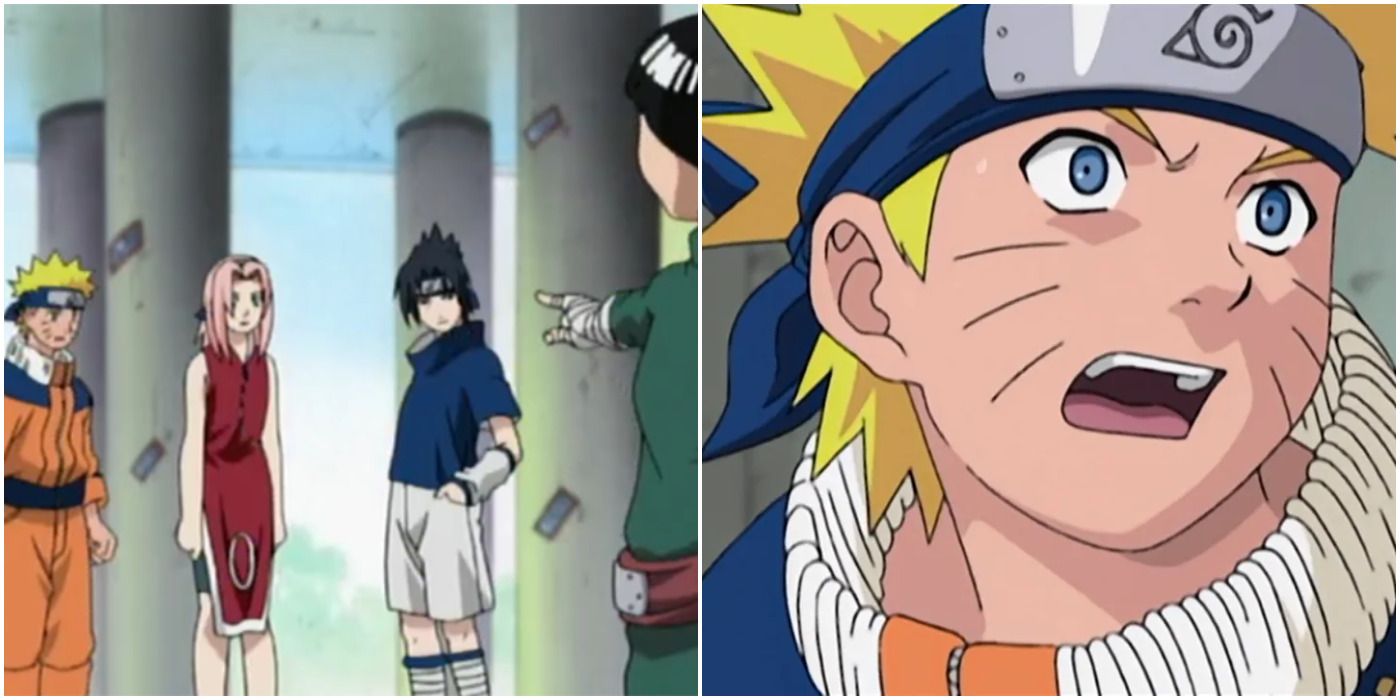 Naruto’s first fights in part I of Naruto they were slightly less impressive than his later battles, as he still didn’t know how to wield much of his own ability and the only jutsu he really knew was the famous shadow clone jutsu. But his first 10 battles set him up for what was to come in the rest of the show and he truly became an icon throughout the series.

RELATED: Naruto: Every Battle Of The Chunin Exams Arc, Ranked Worst To Best

Naruto’s first fights occur throughout the show’s first two seasons and in the chunin exam arc (where things really start to get interesting). During the Forest of Death, Naruto, Sasuke and Sakura face a series of intense enemies. . His fight against Haku is the first heavy, real battle, but things only get more intense from there.

10 The fight between Naruto and Iruka vs. Mizuki Introduces Shadow Clone Jutsu

Within the first episode of Naruto, he and Iruka engage in a battle with another Hidden Leaf Village ninja named Mizuki (who never appears again) who is trying to betray them and steal a sacred scroll that has the forbidden Shadow Clone Jutsu.

Naruto learns about the nine-tailed fox within him and understands why he is the city’s scorn. But Iruka makes sure that Naruto knows that he doesn’t hate him and that he really cares about him. This fight was minimal but ended with Naruto performing an impressive Shadow Clone Jutsu and hitting Mizuki which injured Iruka.

9 The first Naruto vs. Sasuke’s fight is very one-sided

This fight actually occurs off-screen when Naruto sneaks into the same room as Sasuke, catches him off guard, and then uses a transformation jutsu to turn into him. The fight is super short and more of a one-sided sneak attack more than anything as Naruto quickly ties up Sasuke and tapes his mouth over.

He does it to try and see what Sakura thinks of him, only it goes horribly wrong and causes even more confusion when Sasuke breaks free of his bonds.

8 Team 7 vs. Kakashi’s fight gave Naruto a chance to show his determination

Upon becoming a genin, rookie 9 and all the other students who graduated from the academy are given jonin instructors to guide them as a ninja. Sasuke, Sakura, and Naruto are paired up and given the union, Kakashi. Kakashi right now has an alarming pass / fail rate with his previous teams failing.

Kakashi fights Team 7 to see what they’re made of and to see if they understand that they have to work together instead of against each other. While this is more of a test, Naruto shows all his determination.

7 Team 7 vs. The Mist Ninja Fight gives Sasuke a chance to protect his friends

When they first embark on their quest to the Mist Village, they are attacked by two Mist ninja assassins who apparently kill Kakashi as soon as they get there. Naruto goes into a bit of shock and barely fights them while Sasuke kicks in, protecting Naruto and then Sakura from any harm before Kakashi shows up and stops the two ninjas from doing any harm (and then he can get more information from they). both of them.)

Naruto also discovers that he has been poisoned and has to prevent it from flowing by stabbing his own hand with a kunai.

6 Team 7 vs. Zabuza’s fight was the first time the team was really scared

The battle against Zabuza was one of the first times that the new ninja was afraid of facing another opponent. Sasuke froze in place and had to get out of that fear thanks to Kakashi himself while Sakura made sure to take care of her client.

Naruto also protected himself and was ready to attack at any moment, but he was also deeply scared of going against Zabuza and the immense difference in power between the two. Kakashi manages to protect them and stop Zabuza.

5 Naruto and Sasuke vs. Haku Fight shows Naruto powering up

Naruto and Sasuke fight Haku in their first big solo fight without Kakashi’s help. The two of them are locked in Haku’s ice mirrors and have a hard time defeating him. Naruto is hit long before Sasuke jumps in front of him to protect him, taking all the needles. TO

After thinking that Sasuke is dead, Naruto lets go of a bit of the nine-tailed chakra and fights Haku while also having a deep conversation about morals. It’s the first time fans have seen Naruto turn on.

4 The Naruto vs. Rock Lee Fight shows Naruto losing his temper (and losing the fight)

Right before Chunin’s exam, Rock Lee appears in front of Naruto, Sasuke, and Sakura to confess his love to Sakura and see what the latest Uchiha is made of. But Naruto is sick and tired of Sasuke being the big shot of the Rookie Nine, so he sets out to fight Rock Lee himself.

Naruto is wiped out, crashed into a wall, and then completely confused when he sees the giant tortoise appear, thinking it is Rock Lee’s sensei.

3 Team 7 vs. The Rain Ninja Fight shows that little details matter when pretending to be someone else

The first person Team Seven meets in the Forest of Death is a ninja from the Village Hidden in the Rain. By pretending to be someone else, he manages to surprise Naruto and tie him up, then uses the transformation jutsu to pretend to be him.

Sasuke can immediately see through the ninja’s disguise as he did not replicate the cut on Naruto’s face that he had just received and also placed his kunai pack on the wrong leg. Naruto is then released and the entire team attacks him.

two The Naruto vs. Snake Fight presents a moment in which Naruto is eaten by said snake

It seems that just moments after his encounter with Rain’s ninja, Orochimaru comes in disguise, as well as a ninja from Village Hidden in the Grass and sends out a huge wind bomb that both Sakura and Sasuke are able to avoid.

However, Naruto is hit and sent flying backwards when a huge snake comes and eats him. Naruto fights the snake for a few minutes before using the shadow clone jutsu to open the snake from the inside to escape and avoid being digested.

1 Team 7 vs. Orochimaru’s fight features the village reacting to Naruto having the Nine Tails inside of him

After the snake, Naruto reunites with Sasuke and Sakura in the middle of his fight against Orochimaru. Naruto misses the horrible genjutsu that shook the others in a state of pure fear and swayed in. He imitated Sasuke and taunted him for being so scared while fighting Orochimaru himself.

The villain quickly realized that Naruto had all nine tails inside of him and performed a seal on him that knocked out Naruto, knocking him off a tree and would have fallen to his death had it not been for Sakura throwing a perfectly timed kunai.

NEXT: Naruto: 10 Plot Points That Were Dropped Before The End