10 classic Captain America stories the MCU never had to adapt 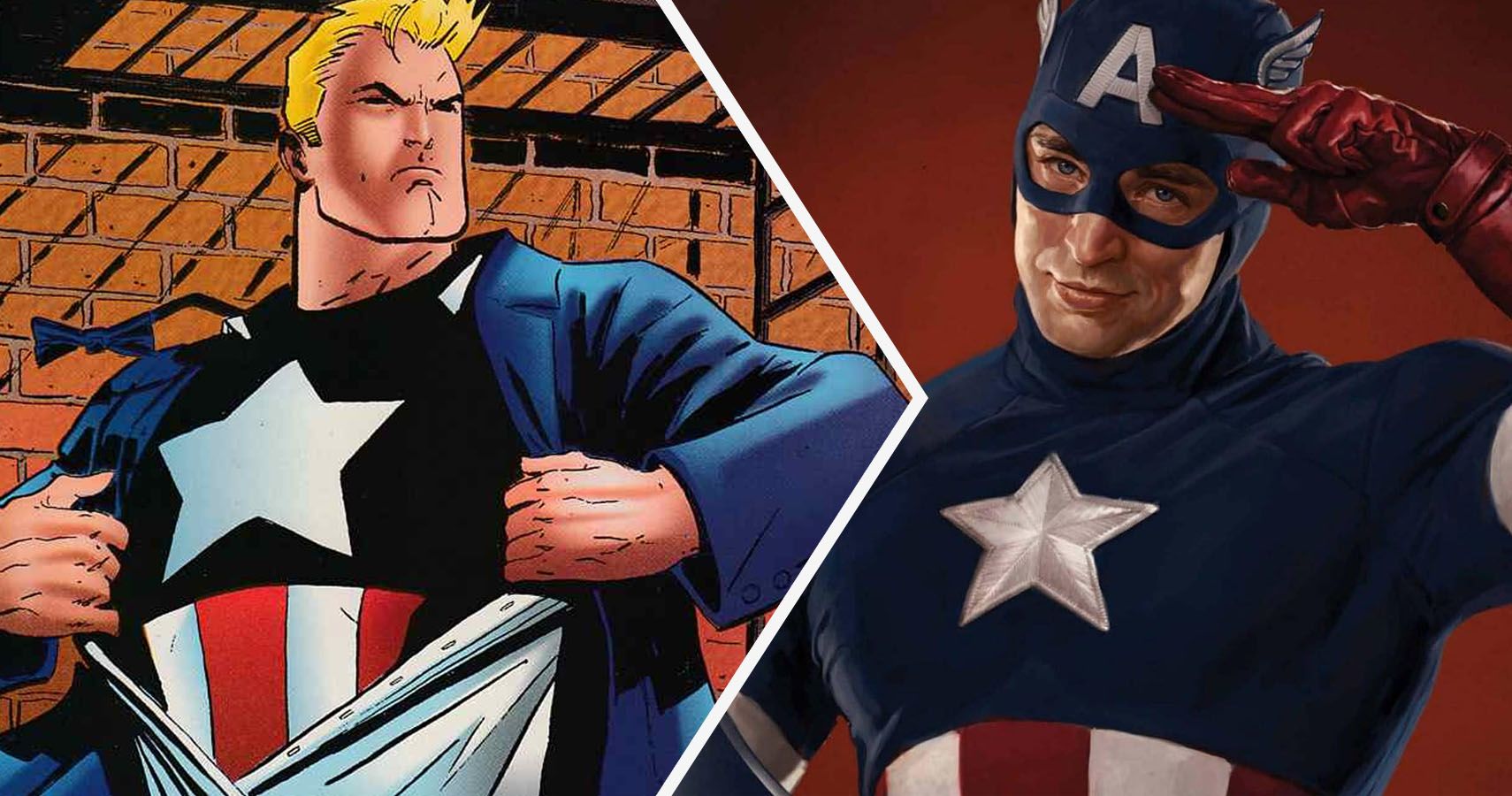 Then Avengers Endgame revealed the sad truth to fans, that Steve Rogers was coming out as Captain America, the public had no idea what to feel. Although the MCU will soon add The Falcon and the Winter Soldier For Disney +, viewers still miss Steve Rogers. Marvel Comics fans especially are sad to see Steve Rogers leave, as there are countless stories from the comics the movies never got to touch on.

With plots like “The Winter Soldier” and “Civil War” taking up the majority of Cap’s screen time, he missed the live-action adaptations of his most iconic comics. There were quite a few classic Cap stories that just didn’t make it to the big screen in time before Chris Evans exited the franchise.

In Captain America Issues 110, 111 and 113, Jim Steranko served as a writer and artist, giving readers a glimpse of an entirely new cap. While fans believed Cap might be dead, “Captain America’s Strange Death” revealed that Cap was fine the entire time and simply faked his death.

He wanted to help his new partner, Rick Jones, who had replaced Bucky Barnes. In this story, Cap is a psychedelic super spy on a mission to save his partner. A Captain America trying to keep his own identity a secret is something the MCU never featured, so it would have been great to see a spy version of Cap.

9 Cap and Thor Bond as men out of time

The MCU’s three main characters got their own trilogies first: Iron Man, Captain America, and Thor. While Tony Stark is undoubtedly a product of Earth and deeply human, Steve Rogers and Thor Odinson are a bit different.

They are both men out of time in their own way, and this often leads them to bond. In fact, Mark Waid and Jorge Molina explored their relationship and their emotions for being so displaced in “Captain America: Man Out of Time.” The two didn’t have as much space to hang out in the MCU, but a movie of them working together would have been more than welcome by fans.

8 The death of Captain America

When it was announced that the MCU would adapt the “Civil War” story, fans were understandably nervous. With “Civil War” came “The Death of Captain America,” an eighteen-issue story arc created by Ed Brubaker and Steve Epting. After Marvel’s infamous “Civil War” ended, Captain America was assassinated by Sharon Carter, his girlfriend at the time, who had been brainwashed to kill him.

Since all the characters necessary for this murder were present, fans were expecting it, but Cap survived. Civil war In its whole. Iron Man and Black Widow never team up for revenge, Falcon never breaks off to work alone, and Winter Soldier never tried to kill Tony (well, for killing Steve).

7 Steve Rogers and the Secret Empire

One of Steve Rogers’ most iconic stories, “Secret Empire,” has been addressed by Marvel Comics multiple times. While Disney will likely never get overtly political in the MCU, using a “Secret Empire” story adapted for modern times would have been a great option.

RELATED: 5 Ways Captain America Is Comprehensive To The Avengers (And 5 Why They Don’t Need Him)

Created by Steve Englehart and Sal Buscema, Captain America Numbers 169 to 175 explored Captain America as a directly political figure, becoming involved in the discovery of an evil plot involving the United States government. Take on the US government in the MCU, but such a straightforward plot would have been even more interesting and timely than ever.

Steve Rogers has passed the shield to Sam Wilson in the MCU. It looks like he and Bucky Barnes will be struggling with the void left without Steve as Captain America in The Falcon and the Winter Soldier. Yet Steve at least knew he could entrust both of them with the role of Cap. In Mark Gruenwald and Kieron Dwyer’s classic Cap story, “Captain America No More,” the next Captain America after Steve, John Walker, is far more violent than Steve can allow. Frustrated, Steve becomes the Captain, regaining his shield in a final fight between the old Cap and the new Cap. There wasn’t much room for this in the MCU, but it would certainly have been an interesting movie and story to include.

5 Cap and the falcon confront Madbomb

One of the most interesting and classic stories Captain America and Falcon shared all along seems a little ridiculous in hindsight. Even the name, “Madbomb”, doesn’t exactly conjure up an obviously deep or serious story. However, Jack Kirby created this story in Captain America # 193 to # 200 to play with what superhero comics were.

He wanted to try something new, and Madbomb was one of his biggest hits. The story has a lot of fun and energy, which would have been great for Chris Evans and Anthony Mackie together. Also, Madbomb’s plot of Cap and Falcon battling a ton of angry Americans would have been a short film or funny movie in the MCU.

4 Returning it with war and memory

On the more serious side of Cap, he has stories like Roger Stern and John Byrne’s “War and Remembrance” that passed by Captain America Issues # 247 – # 255. In the MCU, Captain America got a full movie set during his WWII origin story: The first avenger.

If the MCU had adapted “War and Remembrance,” they might have been able to recall those stories, fighting villains thought to have disappeared. Also, Cap fights Baron Blood, the Nazi vampire in this, Y think about running for president. This classic story had a lot of potential within the MCU if they ever decided to run it.

3 Captain America as a nomad

Before Avengers: Infinity War Y Endgame each one came out, fans kept hoping they could see Captain America show up as Nomad. One of Steve Rogers’ alternative superhero titles in the comics, the Nomad is the identity Steve assumes after acknowledging his idealistic differences with his patriotic image as Cap.

Nomad was first introduced in Captain America # 180, “The Arrival of the Nomad”, by Steve Englehart and Sal Buscema. Steve is so discouraged and disillusioned with what America and its government have become that he becomes the Nomad, a man without a country, by a few numbers. However, that’s when Cap realizes that he could uphold and protect America’s ideals without supporting what America does all the time.

Another interesting story that had all potential players ready to enter the MCU was “Under Siege.” This classic Roger Stern, Tom Buscema and Tom Palmer story developed from Avengers # 273 a Avengers # 277 and saw Baron Zemo uniting the Masters of Evil to fight the Avengers.

Since Baron Zemo is already in the MCU, and already has a grudge against the Avengers, this could have been a cool story to adapt. This story also features the existence of an Avengers mansion where all the Avengers live together, something fans were hoping to see at some point in the MCU.

One of the best Mark Waid and Ron Garney stories was “Operation: Rebirth,” though Waid consistently excels at comic book writing and delivers classic plot after classic. Since Captain America # 445 for Captain America # 448, they told the story of how Captain America returned from the dead to a world created by Adolf Hitler, where the worst happened and a New World Reich was formed.

Cap has to fight Hitler and Red Skull, which could have been a cool plot in between The first avenger Y The Winter Soldier. Some fans are hoping Cap still has a chance to be reborn later in the MCU, but it seems unlikely.