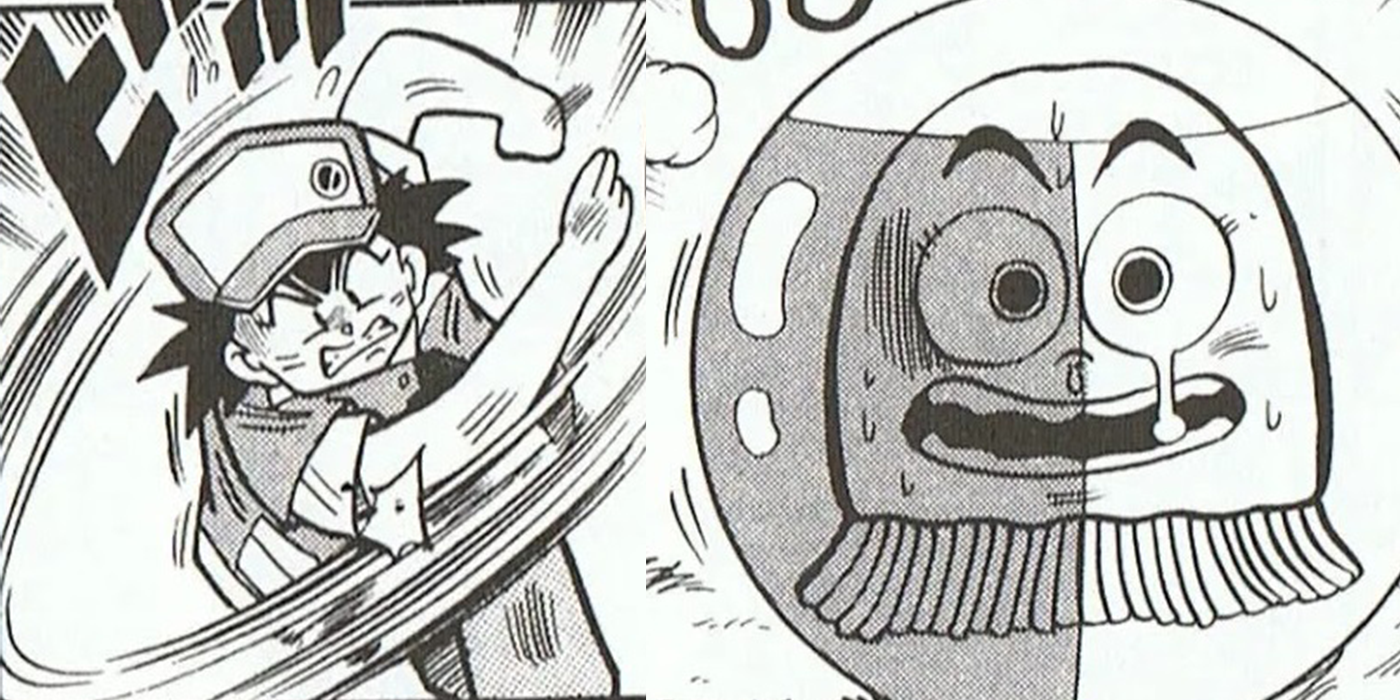 In the various Pokémon manga, various creatures appear that do not match any known species of Pokémon. So what about these unknown Pokémon?

Back during the first generation of Pokemon games, the nature of the world had not yet been fully outlined. To make the world more alive and full of creatures other than the first 151, several different tactics were used. In some cases, it was assumed that the actual animals still existed alongside Pokémon, while other works chose to ignore the problem entirely. Other creators, however, decided to take matters into their own hands and create some new “Pokémon” of their own.

Since the franchise was not so tightly controlled in those days, the authors of the various Pokemon manga were able to draft some designs and put them directly into their works without seeking any kind of official status for them. Since most were simply in the background, this wasn’t considered a big deal at the time, but as the style guides have been adjusted over the years, these early manga now include strange Pokémon that have never been seen before. seen before or after. Aside from the original designs, these sometimes include designs from the contest winners and even some beta designs that were not followed. They rarely have names and as such are identified primarily by description.

Related: An Old Pokemon Manga suggests humans can evolve too

The manga that participated in this most egregiously was the prank manga. Pocket Monsters Pokémon, which has a first volume full of strange unidentified creatures that are supposed to be Pokémon. When Red visits Professor Oak, he has several Pokémon stored in Pokéballs on a shelf in the background, which is knocked over by his opener Clefairy. However, since the Pokéballs are transparent in this iteration, the creatures inside can be seen, and many of them are quite strange. One resembles Slowbro’s tail shell, which is said to be a variant of Shellder; however, there appears to be a hermit crab-like creature living in it.

Another looks like a very fat frog, which may sound like Politoed, but that Pokémon wouldn’t exist for several years. When Red arrives at Brock’s gym in Pewter City, Brock has a similar collection, which he seems to take as trophies from those he has defeated. These include a Pokémon apparently based on a sea anemone. In general, these designs are very simplistic and clearly exist simply to fill the world a bit more.

Some creators may have wanted to include creatures that did not yet have a Pokémon based on them, but felt that simply including a normal animal was not a good option. In Pikachu’s Electric HistoryIn the early chapters, Ash visits the Cerulean City Gym, which contains an aquarium under Misty’s care that features a number of aquatic creatures. The most prominent is an absolutely huge whale, which has six fins, unlike the real species. The aquarium is also specifically called the Pokémon Aquarium, so even if actual animals may exist, they shouldn’t be seen here. A strange two-tier jellyfish also stands out, while most of the others are too small to see enough detail to make a call. Standard Pokémon are also seen in the aquarium, including Tentacruel, further confirming that they are meant to be Pokémon not yet seen. Interestingly, when a Whale Pokémon was finally created during Gen 3 in Wailord form, it also had six fins in three pairs.

Related: Nintendo Direct: Why Was There No Pokémon News?

Sometimes these “unofficial” Pokémon bear a striking resemblance to ideas that were not followed. At Pokémon Battle Frontier manga, the protagonist Enta intends to take on the battle frontier of the same name. It first appears with a Vulpix with only one tail, instead of the six tails that distinguish Vulpix. While you eventually see your tail split into sixes later, it raises some questions as to why it’s rendered this way in the first place. Several Pokédex entries for Vulpix claim that it is born with a tail, indicating that Enta’s Vulpix is ​​very young here. Despite this fact, newborn Vulpixs in games always have six tails.

This became much more interesting with the Red / Green Pokémon Y Pokémon Gold / Silver Beta leaks in 2018 and 2020, which included baby versions of Vulpix, in the traditional “baby Pokémon” sense. Known as Mikon (from mitsu, means three) in beta, similar to Rokon’s Japanese name Vulpix (from anus, that is six). While Mikon has three tails in her baby form, the resemblance is quite striking, and the note on her only tail is almost certainly a nod to the baby design that didn’t go in.

By far the most prominent of these dubious Pokémon is this one, which appears in the second chapter of the (he has just finished) Pocket Monsters Pokémon sleeve. When Red and Clefairy set out at the beginning of their adventure, they are threatened by a crowd of various tough Pokémon. The only one that Clefairy successfully damages is this Pokémon, a random passerby, which Red actually proceeds to capture as the first. He carries it with him for the rest of the chapter, until he reaches the Pokémon center. During an incident there while interacting with Green, the ball shatters and this mysterious Pokémon escapes never to be found. However, this is not the last time this species has been seen; another appears in Brock’s collection in the next chapter.

So why feature an original creation so prominently, when there are so many Pokémon that have yet to appear? Some fans speculate that this was perhaps a misinterpretation of the infamously low-quality sprites from the original. Red / Green Pokémon, and that what the mangaka intended Red to capture was simply a Diglett. Other Pokemon in this chapter they are quite off the model, so it is not a total impossibility. The menacing mob includes a three-eyed Persian, a hunchbacked Mewtwo, and what appears to be a very lobster-like Parasect. The latter is more interesting here, as Green is shown to have captured a much more normal-looking Parasect later in the same chapter. Still, this mystery Pokémon is supposed to be some kind of bug, that it wouldn’t line up with Diglett. And sadly, since it escapes, the answer will remain unknown forever.

Wolverine reveals Marvel’s Phoenix is ​​even worse than fans think