All the great Superman villains missing from the Arrowverse 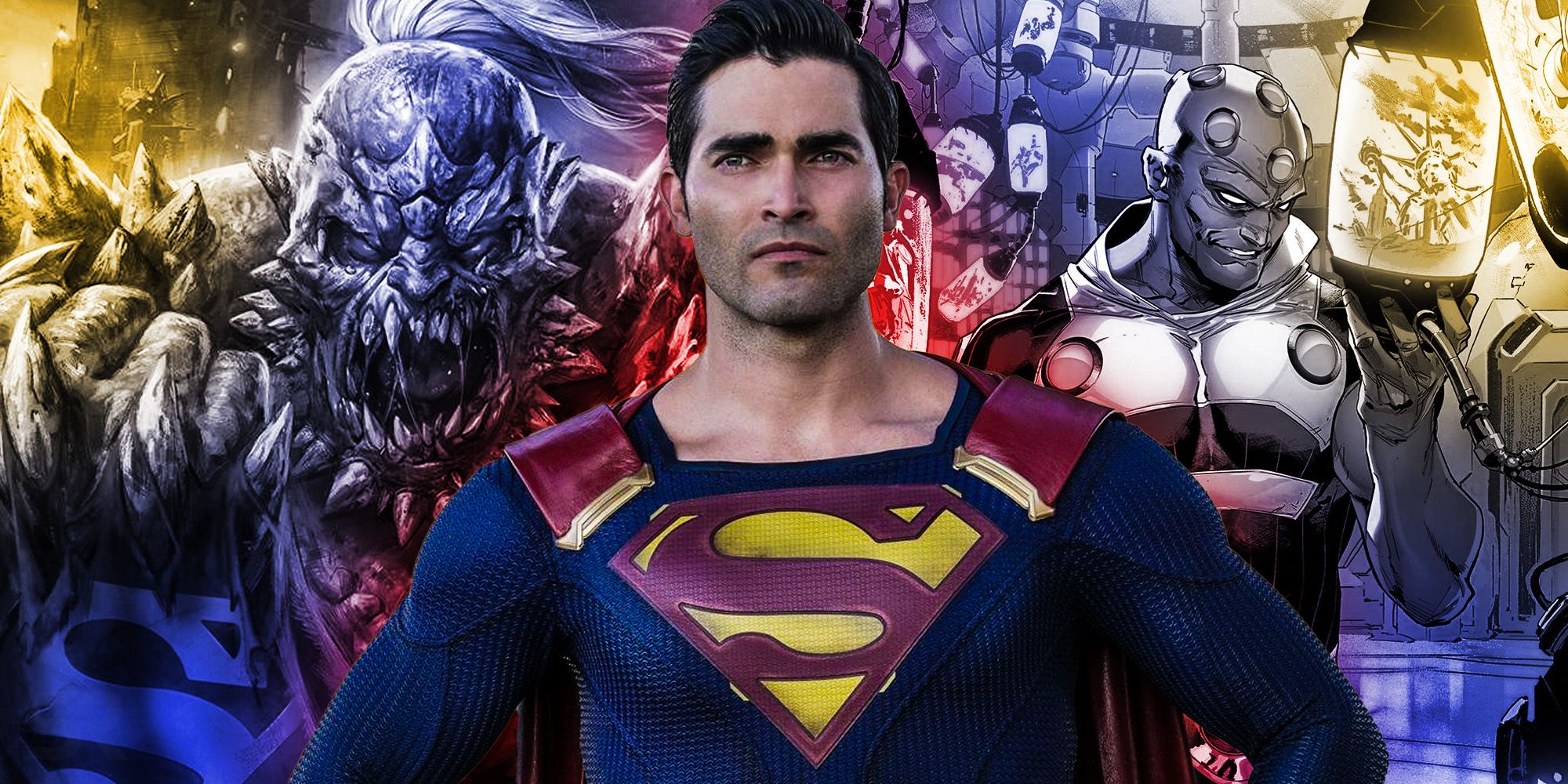 Several of the characters from Superman’s rogues gallery have already been used before Superman and Lois, but some of his villains are still missing from the Arrowverse. His absences provide The CW with many future storytelling opportunities as the new superhero series progresses.

One potential hurdle for Tyler Hoechlin and Elizabeth Tulloch’s new Superman-centric show is the fact that many of their foes have already adapted to the Arrowverse. His greatest rival of all time, Lex Luthor, has been a key antagonist in Supergirl; The show also made use of Metallo, Parasite, Mister Mxyzptlk, Silver Banshee, Toyman, Morgan Edge, and General Zod.

Fortunately, the rebirth of the multiverse allows the Arrowverse to create new incarnations of some of these characters. One Supergirl character to be reintroduced in Superman and Lois It’s Morgan Edge, who will be played by a new actor. More could follow. While “Crisis on Infinite Earths” means Superman and Lois can reinvent old villains, it would also be nice if the series brought in characters that have not been shown yet.

In DC Comics, Ultraman is the evil Superman from Earth-3. In his world, he was raised by the Luthor rather than the Kents, thus ultimately becoming a villain. With his powers, he was able to kill the president of the United States and form a great team of supervillains. Smallville Season 10 adapted Ultraman by exploring a timeline where Kal-El was recovered from the meteor shower by Lex Luthor’s father, Lionel. As for the Arrowverse, the time for it to have its own Ultraman may have passed. By limiting the Arrowverse to one Earth, Crisis on Infinite Earths has created a situation where the alternate timeline characters appear to be off the table.

Introduced in the late 1950s, Titano the Super-Ape was a chimpanzee that transformed into a super powerful ape and possessed enough strength to pose a physical challenge to Superman. DC has reinvented this classic Silver Age character several times over the years, but generally maintains his Superman villain status. Due to the crisis, the Arrowverse has a fairly easy method of introducing Titano. Now that the city of Gorilla Grodd has moved to Earth-Prime, he could be represented as a member of his species who somehow escapes to Smallville and fights Clark.

Commonly identified by the green energy radiating from his head and hands, the Atomic Skull is typically portrayed as a scientist involved in an experiment gone wrong. After gaining superpowers, Atomic Skull took on various heroes from the Justice League, with Superman being his most notable rival. Interestingly, Atomic Skull was believed to be among the meta-human villains seen in Zoom’s army in an episode of The flash season 2. That being said, its possible Flash cameo is not a story problem since Superman and Lois You can always use a new, post-crisis atomic skull.

Related: How Superman and Lois Will Take Lois Lane Will Be Different Than Previous Versions

Created as a flawed duplicate of Superman, Bizarro is shown to be the polar opposite of the Man of Steel in many ways. For that reason, he has often been at odds with Superman for years, and while there have been times when he has been used as an antihero, Bizarro is considered to be a key antagonist of Superman. The Arrowverse delivered a Bizarre Kara Danvers in Supergirl but there has not been a Bizarro Superman. A villain may find a way to create a Bizarre version of Tyler Hoechlin’s character in Superman and Lois.

Known as the “Collector of Worlds” in DC Comics, Brainiac is an alien android who participated in the destruction of Krypton in many versions of the Superman story. He has not appeared in the flesh in the Arrowverse, but characters connected to him, such as Indigo and Brainiac-5, have been used in Supergirl. However, Brainiac himself has been disputed, which means that his existence in the world has been confirmed. Being one of the biggest Superman villains in DC Comics, it would be a surprise if Superman and Lois did not use it eventually. Given his history, it would make sense for him to join the show as the main villain for a one-season arc.

Arguably one of the biggest threats the comic book version of Superman has faced is Imperiex; he was the main opponent of Superman (and several other DC Comics heroes) in the 2001 “Our Worlds At War” crossover event. Composed entirely of energy. Imperiex lives within armor. His main objective, which he has carried out repeatedly for millions of years, is to destroy the universe to make room for a new one. Despite all his Kryptonian abilities, Superman had no choice but to rely on members of his own rogue gallery to finish him off. Given how absurdly powerful Imperiex is, it feels like a character the Arrowverse should save for a large-scale crossover event between multiple Arrowverse shows. It’s true that it may be a bit early for Imperiex, considering that his plan to destroy the universe has some similarities to Anti-Monitor’s in Crisis on Infinite Earths.

Often considered the DC Comics equivalent of Marvel’s Thanos, Darkseid is a member of the New Gods and a tyrant of a world called Apokolips. Darkseid’s attempts to conquer Earth and Superman’s main roles in defeating him have made him one of Superman’s most important enemies. That has a lot to do with why Smallville chose him to be the last villain Clark will face before becoming Superman. As fun as it is for the Arrowverse to go in the same direction, Darkseid may not be an option for a while. He was mentioned as a pre-Superman opponent in Crisis, but that reference may be all the Arrowverse is willing to do with him for now, especially given his relevance to the DCEU.

Related: Superman and Lois: Who’s the Stranger (Each Theory)

An alien bounty hunter and fan-favorite antihero, Lobo is known for his unbridled violence. Unsurprisingly, his antics have made him an enemy of Superman. On certain occasions, Lobo has tried to hunt down and capture Superman. Due to his super strength and healing factor, Lobo is even able to go toe-to-toe with the Man of Steel. So far, there has only been one live-action Wolf, which is the one that appeared on Krypton season 2, played by Emmett J. Scanlan. The Wolf of the Arrowverse was teased in Supergirl when Kara Danvers and Martian Manhunter speculated on an unnamed intergalactic bounty hunter. His name didn’t have to be said out loud for fans to know who they were talking about. So far, Lobo hasn’t been the subject of anything larger than an Easter egg in the Arrowverse, but that could potentially change in Superman and Lois.

Similar to Imperiex or Brainiac, Mongul is a villain who could fit into Superman and Lois as a long-term threat to the main characters. In the comics, Mongul was originally an alien warlord whose physical abilities surpassed those of Superman. He was the ruler of Warworld, where he forced skilled warriors to engage in deadly combat with each other for fun. If he ever made it to Earth, it would be a thorn in Superman’s side, and one that might require the help of his fellow Arrowverse superheroes.

Doomsday, the alien monster known for killing Superman in the 1990s, is one of the largest characters in DC Comics yet to be adapted into the Arrowverse. However, the Arrowverse’s Superman has already fought Doomsday; The encounter was confirmed by Lois Lane during the first hour of the Crisis. It is unknown how the fight unfolded or if Doomsday survived, but the fact that Superman is still alive indicates that he won the fight. Since the fate of Doomsday is uncertain, it could still appear, of course, but it can be difficult for Superman and Lois to make his debut as exciting as it would be if Clark had never found it. Even if the post-crisis doomsday has yet to come to Earth, Clark will still retain the memory of their original encounter.

More: How Superman And Lois Are Avoiding A Common Arrowverse Problem

Where did the twins go? Mephisto Comics link explained