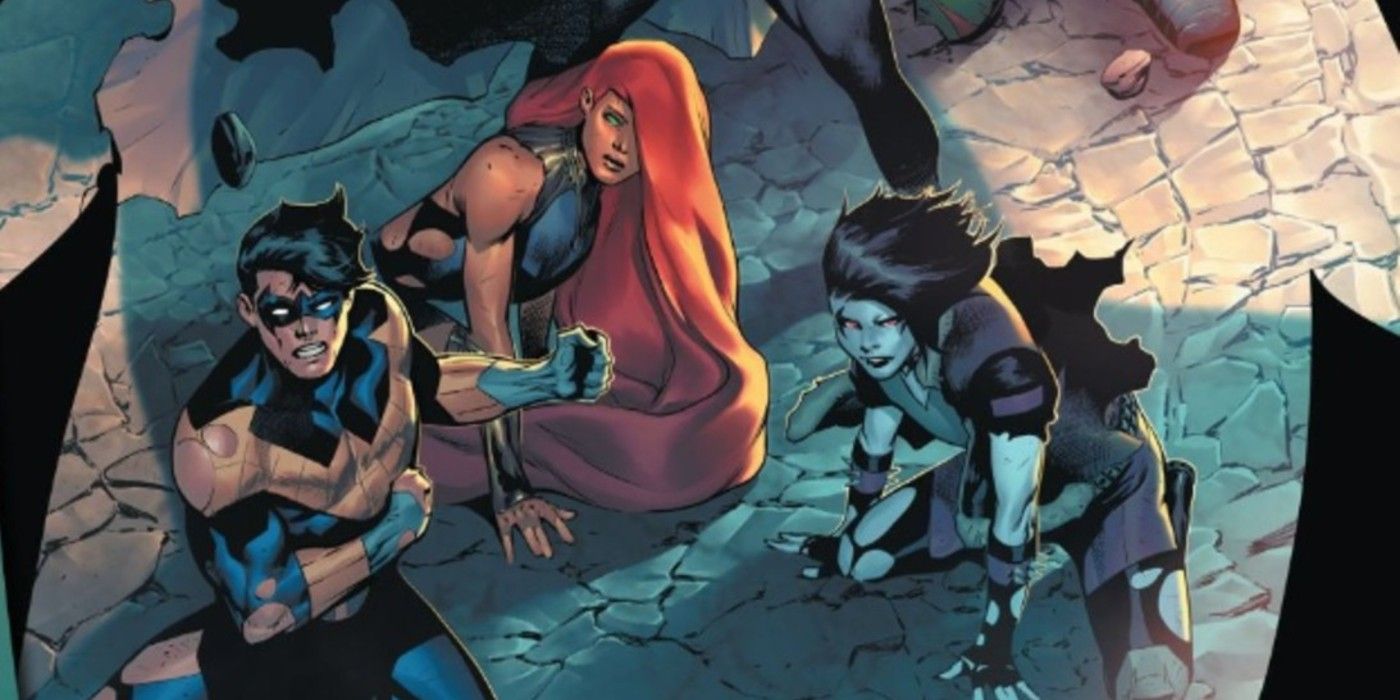 One of the most iconic phrases in the entire DC Universe lives on even in the bleakest Teen Titans timeline.

The DC Universe faces one of its darkest ages throughout the various titles that make up Future state, one that many of Earth’s greatest heroes have already left. The Teen Titans themselves have come face to face with the most horrible evils in this new future, and from the looks of it, they might be the only ones left who can save it. Even as they fight for the fate of the world, the Titans know that small victories matter as much as any other. While there’s no time to properly celebrate those little victories on the battlefield, there’s always time for a triumphant one-line phrase, and a Titan catchphrase has become that for another surprising member of the team.

Not many members of the Titans team remain after the Four Horsemen of Apokalips were unleashed on the world, each claiming a team member as their unwitting host. The most recognizable of them all is Famine inside Wally West’s body. His particular reign of terror has already claimed the lives of several other speedsters, including Kid Flash. While the surviving Titans may no longer have a home or complete faith in one another, there is no time left to attempt to repair the bridges. They have one shot left to take down the Riders, and the time to do it is now. On the battlefield, Crush, the daughter of Lobo, is enraged by the enormous Pestilence. Pestilence has settled into the body of her friend and teammate Roundhouse. Knowing that there is nothing left of him, Crush doesn’t have to worry about holding back at all. While Cy-Beast tends to Famine, Crush gets a tedder that leaves Pestilence literally vomiting her guts. At this moment, she lets out a triumphant “Booyah”.

First introduced in 2003 Teen Titans Cartoon Network television series, “Booyah” was the catchphrase of none other than Cyborg himself, and the typically happy or boisterous exclamation quickly became synonymous with the character. The catchphrase followed Cyborg from the beginning. Teen Titans series to Teen Titans Go! spin-off, and was even uttered by Ray Fisher when he played the character in the 2017 live action League of Justice. While that particular expression turned into something of a controversy, no one was disappointed when the character finally picked up the catchphrase in the comics relatively recently. The most famous comic “Booyah” so far probably belongs to the one from 2019. League of Justice Odyssey # 4 by Joshua Williamson and Phillipe Briones, where Cyborg shouts his catchphrase to a crowd of cheering gladiator spectators.

RELATED: Shazam !: Why The DCEU Star Locked Up The Most POWERFUL Hero Of The Teen Titans

Seeing it come from someone other than Cyborg might be a bit strange, but it’s more than reasonable that one of his teammates has acquired it himself over the years. Then again, it could be indicative of a deeper relationship between Crush and Cyborg, or even his currently fused Cy-Beast form that he shares with Beast Boy. The two may not have more in common, but they’ve both been outsiders in ways the rest of the team haven’t. The idea that Crush found in Cyborg the mentor or role model he needed is not just a comforting thought, but a very real possibility. Whatever the case, it’s good to see that the beloved catchphrase is still alive, even if it’s in the worst future the DC Universe has seen thus far.

READ ON: Teen Titans: Red X reunites ALL Titans for the last time