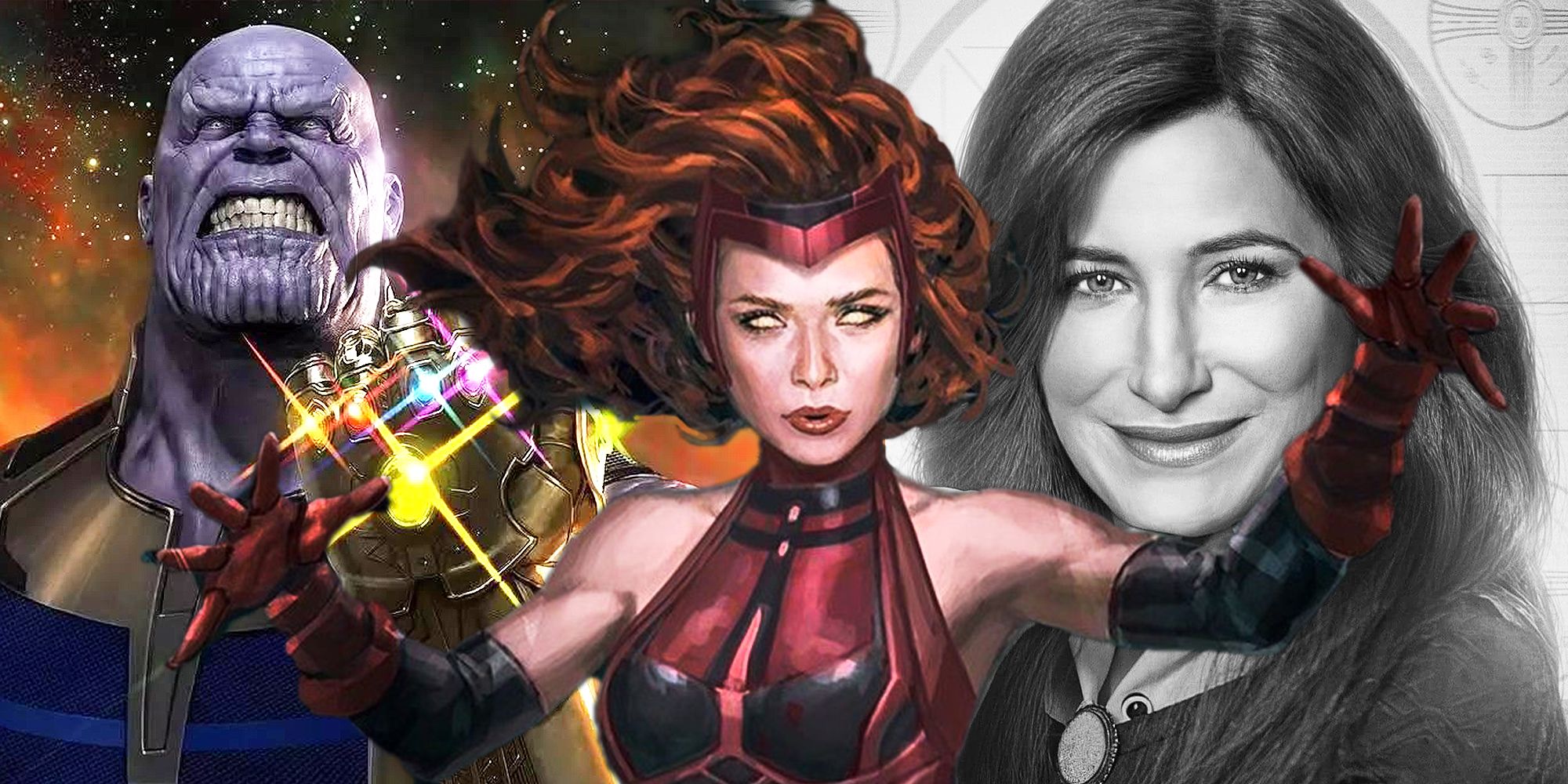 WandaVision Episode 7 began to set up the next incarnations of universal power, this time multiversal, in the form of people and places rather than Infinity Stones. The first 23 films of the MCU focused on the search for the Infinity Stones and the catastrophic repercussions that came with it. To varying degrees, each conflict between heroes and villains led them to meet tragic or triumphant fates due to Thanos’ ambitious quest to use the Infinity Gauntlet to decimate the universe, and anything that comes after the end of Phase 3 will be a direct consequence of the tragic victory of the Avengers in Avengers Endgame.

With the Infinity Stones reduced to atoms or on a completely different timeline, the universe is expected to become unbalanced. The MCU timelines will likely merge and alternate realities will collide. The villains will search for other sources of power and the heroes will have to find different ways to stop them. In the comics, there are various objects and entities that, similar to the Infinity Stones, dictate whether the universe will remain in order or fall into total chaos, and the MCU will likely adapt some of them into future Disney + movies and shows.

Up to now, WandaVision you’ve done a great job shaping many concepts that will become essential later on. But since the MCU should be less complicated than the comics, some of them will likely be simplified or merged. Thus, cosmic microwave background radiation, the multiverse, and Nexus beings will likely replace the science of the Quantum Realm, intergalactic planets, and the Infinity Stones as the MCU’s main points of interest. This raises the questions: what is the Nexus and what role will it play in the MCU?

What are the nexus beings?

Just as the Infinity Stones represented a key aspect of the universe, each Nexus being embodies a different aspect of the multiverse. This includes concepts more related to magic, such as sorcery, necromancy, and geomancy. Since these entities are sentient (and often innately powerful), they can use and abuse their abilities to further their own goals or to protect the multiverse, possibly making them more dangerous than the Infinity Stones. Nexus beings also connect to the Nexus of All Realities, which means the point where all realities collide. As such, they can affect the probabilities of the multiverse and alter reality on one or more planes of existence.

Where the Nexus manifests can be as important as the Nexus beings themselves. This means that a place like Westview could be the gateway to multiversal insanity and an open door for other Nexus beings. However, at this point in the MCU, the most intriguing mystery is which character will be part of the Nexus. In the comics, Nexus beings include Kang The Conqueror and Franklin Richards, two direct descendants of the Fantastic Four; Jean Gray, known to possess the Phoenix Force; Merlin, the legendary wizard of the Arthurian era, and both Wanda and Vision, who connect with the Nexus due to their particular origins and abilities.

Why is Wanda probably a nexus being

Interestingly enough, Elizabeth Olsen’s Wanda Maximoff is even more worthy of the title of Nexus Being than her comic book counterpart. While the Scarlet Witch comic is a Nexus primarily due to her mutant powers and magical abilities, the MCU’s Wanda owes her powers to the Mind Stone and what are likely latent mutant genes. On top of that, she has become the anchor point between the MCU and other universes, namely Fox’s. X Men franchise, which has only recently begun to tie into the MCU. To top it all, the fake world of Scarlet Witch born out of trauma has become an engine of magical power that can allow her to tear the multiverse wide open.

Related: How Monica Can Break Through the Hex Barrier

When choosing which character to own, Nexus of All Realities has it easy. Wanda has a close connection to the Infinity Stones, as she not only drew her power from the Mind Stone (and has even destroyed it once) but also behaves like the Reality Stone. Wanda is also potentially the MCU’s first mutant and may be related by blood to Evan Peters’ Quicksilver, who hails from another universe. Most importantly, Wanda transformed Westview with magic, turning it into a place where different planes of reality could easily intersect.

Why does Agatha want Wanda’s powers

Agatha Harkness has much more experience as a witch than Wanda Maximoff. Agatha must know how useful Westview is to other magical entities, as no other similar location has apparently been created in recorded history. In fact, Agatha may have identified Wanda as soon as she obtained her powers from the Mind Stone or when Wanda nearly defeated Thanos by herself. Wanda has not only become a target of world governments and powerful organizations, but also sorcerers, witches, and other mystical entities. While Agatha got to her first, other characters like Clea or Emma Frost could also be behind Scarlet Witch.

As for how Agatha Harkness can use Wanda’s magic, the mystery is harder to decipher with just a few clues. In the comics, Agatha Harkness is a witch who has lived through various historical eras. He lived to see the fall of Atlantis and played a major role in the Salem Witch Trials. In fact, it is quite likely that WandaVision will shed light on her story sooner rather than later as this could expose her motivations for wanting Wanda’s help and power in the present. Perhaps Agatha’s “husband” Ralph, who may or may not be Mephisto in disguise, has been incarcerated ever since. But if there’s one thing that common tropes about witches have established, it’s that their pets aren’t always what they seem, so it wouldn’t be surprising if Agatha intends to get Ralph, Mephisto, or their son, Nicholas Scratch, out of your pet bunny. Mr. Scratch.

Aside from the essential elements of the universe, the Infinity Stones have affected many influential MCU characters. This is most evident in how the Mind Stone brought Vision to life and how the Space Stone gave Captain Marvel superpowers, but also in the symbolic transformation of many heroes and villains. For example, the Time Stone helped Doctor Strange go from rookie to master in no time and defeat Kaecilius and Dormammu, the latter of whom lives in a different dimension. The Space Stone sent an evil Loki to a different timeline and will likely turn him into an antihero in a shorter period of time than his original self, and the Soul Stone transformed Red Skull from a mustache-turning villain into the stoic guardian of the door to the Soul World, a pocket of reality that represents the afterlife.

Nexus beings and the Nexus of All Realities can behave similarly on a multiversal level. Wanda, as the full-fledged Scarlet Witch, could represent Necromancy after resurrecting Vision and Quicksilver (and possibly their twins, given that they are reincarnated in the comics), while Agatha Harkness embodies witchcraft. Westview, New Jersey could be the main point where all realities collide. As always, the MCU can modify some details to fit all these concepts within the established context and future frames. If that WandaVision has established so far that it is something one can trust, it is logical to assume that Wanda’s son Billy, who is quite powerful in the comics, could be a Nexus being, and that is why Agatha is after the twins. . Spider-Man could be another Nexus being, and that would explain why he’s the focal point of the MCU’s apparent Spider-Verse.

The introduction of the Nexus streamlines the MCU because each conflict points toward a shared goal. It also allows key new characters like Wanda and Wiccan to become the faces of the MCU. WandaVision You’re just starting to set up the Nexus, but everything else is also coming together. For example, the introduction of Kang the Conqueror in Ant-Man and The Wasp: Quantumania, the possible revelation of Franklin Richards in the next Fantastic four, and any mysteries Doctor Strange in the multiverse of madness Y Spider-Man: Homecoming 3 Support the Nexus as the Holy Grail of the next phases of the MCU.

More: Why does the Scarlet Witch’s house change and she can’t stop it?