Black Panther Vs Captain America: Who is the strongest avenger? 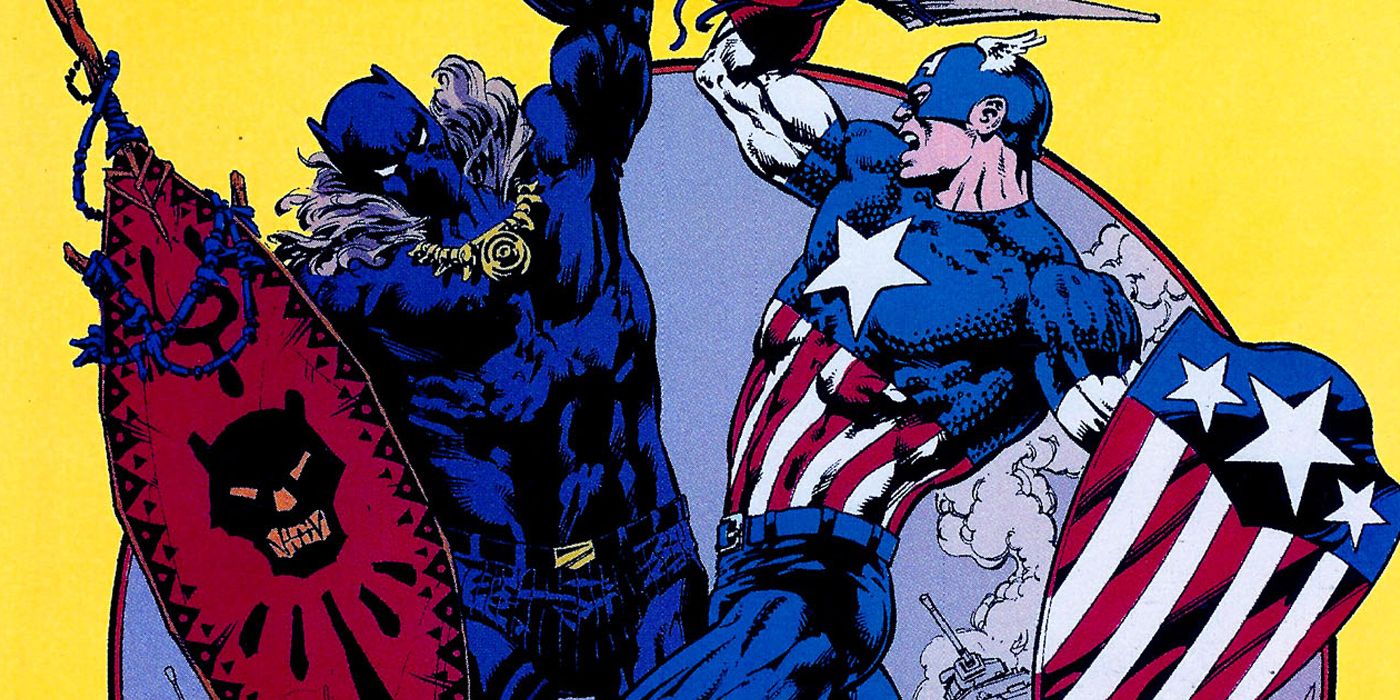 From radioactive genetic mutation to magically bestowed power, Heart Shaped Herb and Super Soldier Serum are simply two taps in which Marvel Comics characters have gained some level of superhuman abilities. However, with Black Panther and Captain America, their iconic hand-to-hand combat coupled with the ultimate human condition made them some of the most formidable men to face.

So, you have to ask yourself, who would emerge victorious in a one-on-one fight? Does Steve’s tenacity outshine T’Challa’s? Dive into the dissection of these two iconic characters and determine who would be the strongest Avenger.

As the original super soldier, the ambition and drive of the frail Steve Rodgers overshadowed the lack of physical ability. A simple chemical cocktail, his human enhancing serum simply brought the chance to take down the bad guys and fight the good fight, but his drive to fight for justice remained incorruptible and steadfast. A beacon in the superhero community, Captain America is the perfect specimen of the ultimate human condition and is cited as “the next step in human evolution, while remaining fully human” by creator of sera, Abraham Erskine.

Consuming the heart-shaped herb grants the seated king abilities very similar to that super soldier serum, except that, alternatively to being a scientifically engineered compound, it is a naturally growing herb. Ancient Wakanda believed it to be a gift from the Panther God, Bast, but in fact it was a mutated plant that had fused with a crashed Vibranium meteorite from millennia ago. However, in addition to enhancing his physical attributes, Black Panther’s senses are also raised to superhuman levels, giving him the ability to pick up a heartbeat, track any scent, and see in total darkness. If that gives him an advantage over Cap it is inclusive, since both have outdone each other in combat.

8 Brute force in the comics: Captain America can bench press 1,100 pounds as a warm-up, while Black Panther can bulldog a 3,000-pound rhino

Commonly a skill wielded by those in the superhero community, super strength is usually standard for anyone enhanced with super powers, and for characters like the Incredible Hulk, super strength is the bread and butter that makes the character so awesome. Nonetheless, while they aren’t incredibly powerful in strength, T’Challa and Steve definitely outperform heavyweight lifters, as both can easily carry up to 800 pounds. Additionally, Steve is capable of bench pressing 1,100 pounds as a warm-up, while T’Challa can bulldog a 3,000-pound rhino and jump 10 feet off the ground with the strength of his legs alone.

7 Brute force in the MCU: the two are almost even in combat

The MCU did well to point out that Steve and T’Challa are nearly even in combat with the two facing each other in Captain America: Civil War. While there are several instances where Cap throws a guy off with a simple punch or kick, one of the most fascinating was his feat of preventing Bucky Barnes from escaping in a helicopter, essentially pulling him onto the helipad. Later, at Leipzig-Halle International Airport, a battle begins between Cap and T’Challa, and when Cap blocks T’Challa’s advances with his shield, T’Challa apparently begins to overpower Steve by knocking his shield down to that breaks. Also, in homage to his comic book counterpart, 2018 Black Panther he saw T’Challa take down a charging rhino in the climactic battle.

When it comes to Marvel Comics, Captain America’s word is practically law, as his influence is wide due to him being one of the most revered heroes within the community. Serving as a rallying point, Steve Rogers fights for the idea of ​​honor, sacrifice and righteousness and has been depicted as the last man standing multiple times. However, thanks to his courage, he has also seen and experienced great loss.

For starters, the time Steve lost being frozen in ice is a moment where he will never be able to return, he has been surpassed after fighting Thanos and has been killed by trusted friends. However, one of his most obvious descriptions of the defeat was in Brian Micheal Bendis Ultron age after Ultron conquered the earth. Captain America sat defeated, wallowing in his own self-pity for not saving more people as the remaining heroes waited for him to join in and lead them to victory.

Being the king of a nation and, in addition, a technologically advanced one, certainly has its advantages. However, as with these titles, it also carries a heavy burden. The fine line between fighting for what is right and what is right in your country is difficult to discern, as they are often not synonymous with each other. Often loved and respected by his people, T’Challa is also despised by those who feel that his commitment to the outside world is a neglect of duty to protect the sanctity of the kingdom. Killmonger’s success in usurping the throne of Wakanda is one of T’Challa’s most glaring failures, however, his act of rendering all Vibranium useless afterwards War of doom it issued significant public disdain as the source of the country’s wealth and prosperity was now practically useless.

In Avengers: Infinity War, many questions arose as to how effective the Captain Americas super soldier serum was, as it was perceived that Thanos was held back for a moment by Cap. Nevertheless, Avengers Endgame would pit the two against each other in a longer, tougher battle that produced one of the most epic fights not just in the MCU but in the action genre as a whole.

RELATED: Guardians of the Galaxy Vs Thanos: Who Wins?

Watching the MCU trinity (Iron Man, Cap, and Thor) take on the Mad Titan delivered exceptional action sequences, but Cap’s battle against a battle-hardened Thanos was pure fan service that is remarkably memorable, especially when Thanos is hit by a Cap wielding Mjolnir.

While the highlights of Steve Rogers vs. Mad Titan extend into both the comics and the movies, T’Challa’s attempt to subdue Thanos in Infinity war resulted in him being brutally strangled and inevitably dusted off. His return in Endgame included the subsequent return of the Wakanda forces that helped contain Thanos, but his role in Jonathan Hickman infinite showed a greater feat at T’Challa by conquering part of the Black Order. Same as him Infinity war movie, it is said that there is an infinity stone in Wakanda that leads Thanos to send his Black Order there to obtain it. Biting off more than they can chew, Wakanda fends off the attack, but not without massive casualties on his side.

Truly a man out of time, Steve Rogers is a timeless character whose tenure in the comics dates back to World War II. Being the embodiment of altruism, Steve Rogers is the hero, while Captain America was simply the serum, a means to put his ideas into action and fight the good fight.

Yet this soldier protects not just his nation but the entire world, a notion that has put him at odds with government orders that compromise his idea of ​​truth and freedom. From abandoning his Captain America mantle, both as Nomad and Hydra Cap, to his worth to live a happy life with Peggy Carter, Steve Rogers’ arc through the movies and comics is certainly interesting and one that leaves a behind. printing if reversed.

T’Challa, a revered but controversial king to his people, jealously protects his nation of Wakanda and has no qualms about annihilating perceived threats to his nation’s sovereignty. Understand, holding the reins of the most technologically advanced nation on earth brings the problem of adversaries, those with superior substantial power, pushing Wakanda and its king to the limit.

A fallen but beloved king who propelled his people to the stars in what would become the Intergalactic Empire of Wakanda, T’Challa’s tender kindness towards outside nations separates him from the rigidity of his ancestors, inviting further conflict. towards the prosperity of his people.


Next
The 10 most dangerous villains Spider-Man fought against

Trevon Gibbs is a 22-year-old artist living in California with a keen interest in everything related to the general medium of superhero epics. Trevon’s journey as a writer is in its early stages, but he’s excited to embark on it, and it will bring you his comic book superhero eye and imagination.