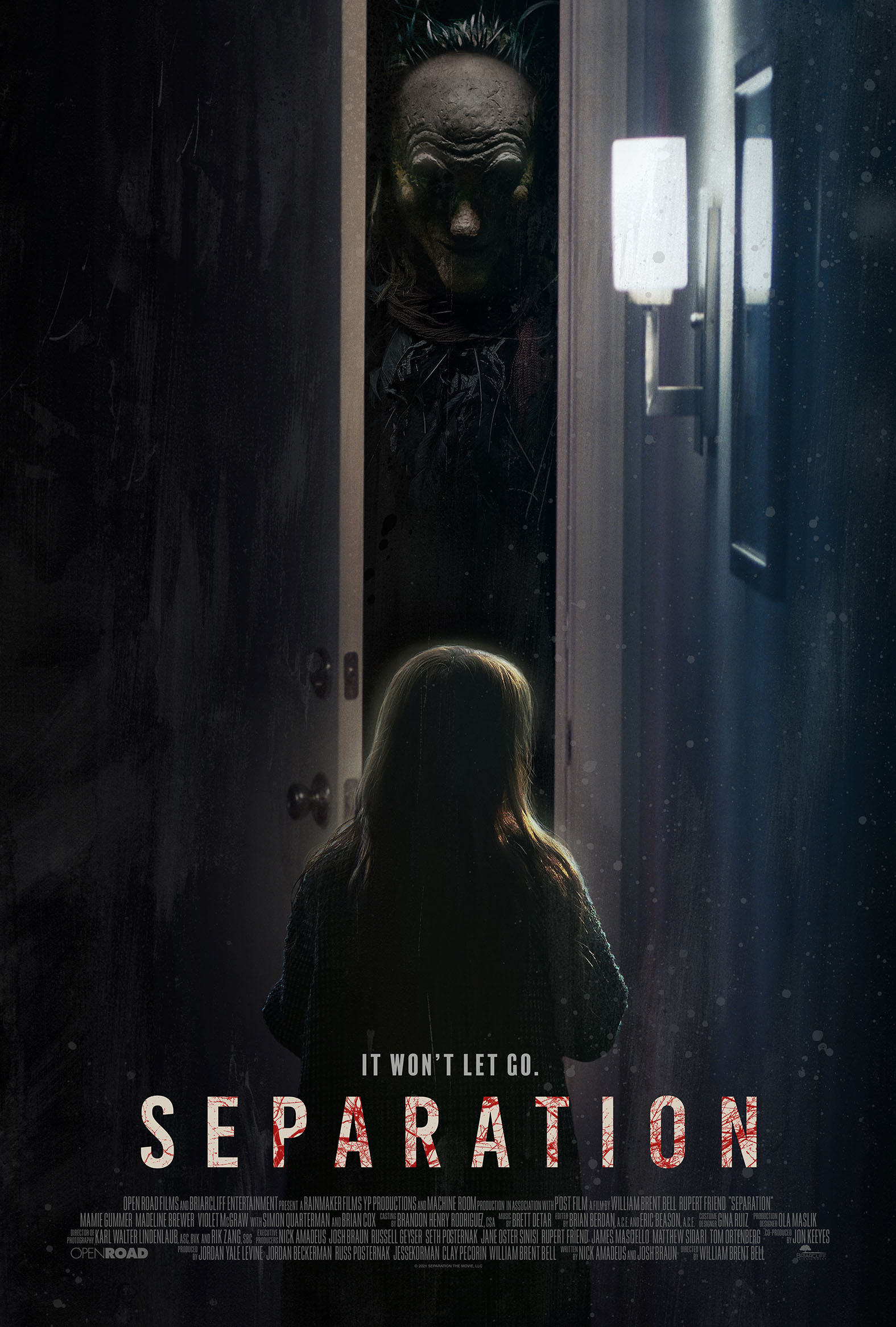 William Brent Bell, Director of The boy Y With the devil inside, recently finished his latest horror thriller Separation, and Collider may exclusively present the first trailer and poster for the film, which comes from Briarcliff Entertainment and Open Road Films.

Violet McGraw since Doctor dream Y The curse of Hill House plays the young lead in the film, Jenny, whose parents (Rupert’s friend Y Mamie Gummer) are constantly fighting. She leads a lonely but imaginative life surrounded by puppets and dolls called “Grisly Kin”, which are based on the works of her father, who is an artist.

When Jenny’s mother tragically dies in a hit-and-run accident, she and her father attempt to rebuild a new life. But when the girl’s grandfatherBrian Cox) demands custody and his babysitter (Madeline brewer) tries to be the new woman in the house, life in her Brooklyn townhouse takes a dark turn. The terrifying dolls and puppets come to life and Jenny is the only person who can see the ghoulish creatures. As the motives of these evil spirits become clear, everyone’s lives are put in grave danger.

Bell most recently directed Brahms: the boy II, which also saw him work with creepy dolls, and is currently in post-production on the horror prequel. Orphan: First deathwhat do you see Isabelle fuhrman repeats her creepy role of Esther in front of Julia Stiles. Check out the trailer for his new movie below and get ready to Hereditary-like scares when Separation hits theaters April 30.

Jenny (Violet McGraw), 8, is constantly caught in the middle of the dispute between her lawyer mother Maggie (Mamie Gummer) and her artist father Jeff (Rupert Friend). She leads a lonely but imaginative life, surrounded by puppets and dolls called “Grisly Kin”, which are based on the works of her father. When Maggie tragically dies in a hit and run, Jeff and Jenny attempt to rebuild a new life. But when Maggie’s father (Brian Cox) sues custody and babysitter Samantha (Madeline Brewer) tries to be the new woman in the house, life at their Brooklyn home takes a dark turn. The puppets and scary characters come to life and Jenny is the only person who can see them. When the motives of the ghoulish creatures become clear, everyone’s lives are put in danger.

KEEP READING: Prequel to ‘Orphan’ in the works with return of Isabelle Fuhrman and Julia Stiles joining

If that last name sounds familiar to you, it’s because Fiona is the daughter of Brad Dourif, the voice of Chucky.

Jeff Sneider is the senior film reporter at Collider, where he publishes film and television news and is curator of the Up-and-Comer of the Month column, as well as presenting The Sneider Cut podcast and the For Your Consideration award-themed series. with Scott Mantz and Perri Nemiroff. A graduate of NYU’s Tisch School of the Arts, Jeff began his career at Ain’t It Cool News before moving to Los Angeles to write for Variety and later TheWrap and Mashable. Jeff also served as editor-in-chief of The Tracking Board and has contributed to the MTV Movies Blog, Hollywood Life magazine, Washington Square News, and the Colorado Springs Independent. His Oscar picks have been featured on the LA Times Envelope site, and he agrees with screenwriter William Goldman, who said of Hollywood that “nobody knows anything.” Jeff is a native of Needham, Massachusetts and has never had a salad. He can be found on Twitter, Instagram, Cameo, and Blogspot by searching for his nom de plume @TheInSneider.