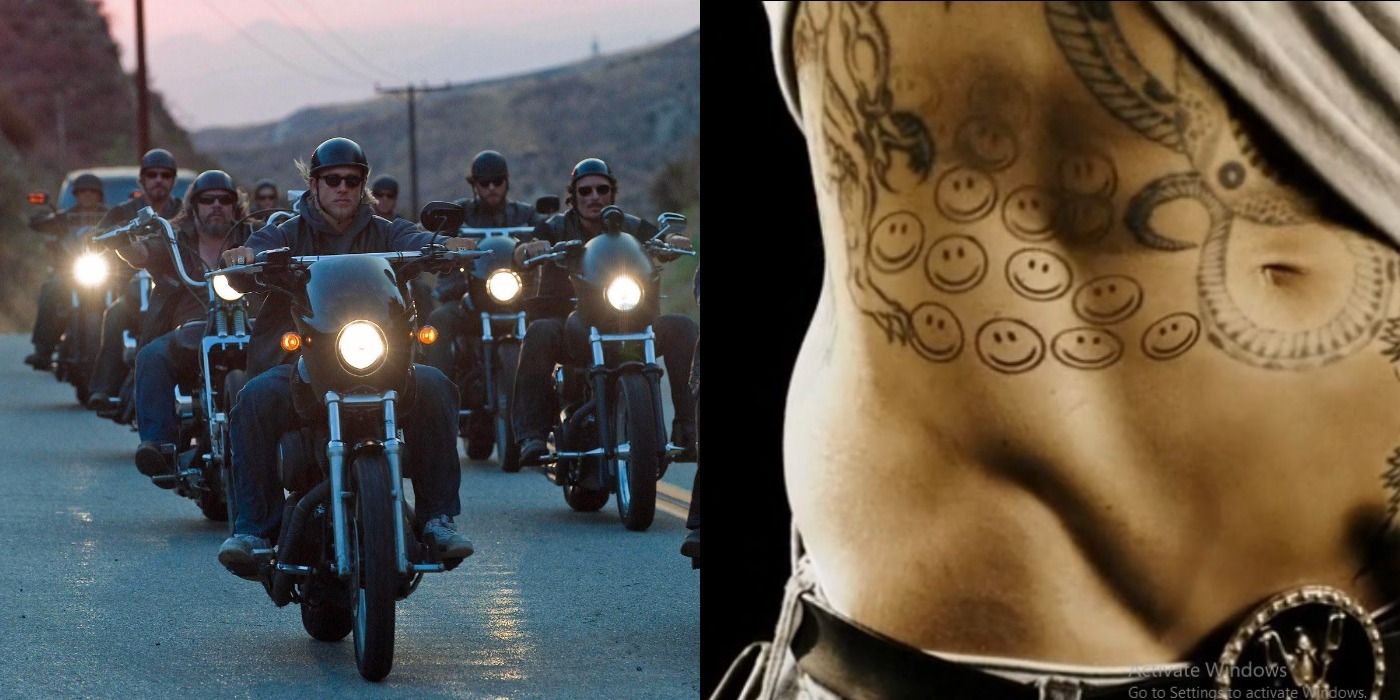 The biggest Sons of Anarchy fans probably know all the lyrics to “The Life” from Curtis Stigers, Velvet Revolver, Dave Kushner, Bob Thiele Jr., and series creator Kurt Sutter. This is the song that plays during the opening credits. Those who don’t know the lyrics will probably enjoy humming anyway.

RELATED: 10 Hamlet Characters And Their Counterparts In Sons Of Anarchy

The song is impossible to miss, but the same cannot be said for other details that appear during the opening credits. There is a quick montage of images and clips that link to themes and important parts of the show. The fact that the credits are less than a minute long also makes it difficult for viewers to spot some of the following.

Although Jax’s father, John “JT” Teller, appears only once in the series through a flashback scene, his presence is felt throughout the seasons. In the opening credits, JT’s grave is briefly captured.

The tombstone reminds viewers that the former club president was once a law-abiding citizen who fought for his country. It indicates that he was a corporal who served in the 25th Infantry in Vietnam. Interestingly, he is not mentioned as the founder of the club. His date of birth is also indicated as May 5, 1940, while the fateful day he died is indicated as May 13, 1993.

To the casual viewer, it might seem like the members of SAMCRO just got on and off. That’s not the case and one of the first takes in the opening credits proves it. Just as ancient soldiers had cavalry, infantry, and generals in different formations, SAMCRO members occupy different positions along the way. There is a road captain to make sure this rule is followed.

When on a mission, the president and vice president basically lead the troops by going to the front. There is also a tail gunner who travels in the back and makes sure they are not followed. The tail gunner also carries a first aid kit in case someone is injured.

Kurt Sutter loves tattoos and it shows throughout the series. It’s hard to think of a character without ink. Tattoos of a particular character are quite interesting. In the opening credits, a mysterious person lifts his shirt to reveal smiley face tattoos on his abdomen. This is Sergeant at Arms Happy Lowman. Although normally calm, Happy has one of the highest kill counts in the series.

RELATED: Most Popular Actors On Sons Of Anarchy, Ranked By Instagram Followers

Happy is said to enjoy murdering people so much that he makes sure to get a smiley face tattoo for every lifetime he takes. Despite his murderous tendencies, he has proven to be a very trustworthy club member. He rarely fails in his missions and executes all orders without asking questions.

The opening credits also show a jail cell door being locked. Prisons serve as important locations throughout the series. with most of the club members finding themselves behind bars at some point.

The jail cell door is a reminder that since criminals are king in this show, the law will not always allow them to get away with it. It’s also worth noting that the jail cell door also appears along with Dayton Callie’s name. Callie plays Unser, the police chief who really does a great job keeping the Sons out of jail.

Just before Katey Sagal’s name appears, a raven tattoo can be seen on what appears to be Gemma’s chest. The raven is an important symbol of the series. Crows often appear before there is a great tragedy. Club members are also considered crows, as they tend to take advantage of other people’s misfortunes.

In the series, the women who date or sleep with the club members are known as Crow Eaters and Gemma is perhaps the most important of all. He manages to go out and marry two club presidents in his life.

Speaking of JT’s time in the military, the American flag is briefly displayed. This could be a reference to other characters’ military careers. The first 9 members Clay Morrow, Piney, and Keith McGee are all war veterans. Hardened by war, the First 9 came together as a group of rebellious men who wanted to live by their own rules.

While their intentions were initially good (to protect Charming from criminal elements), they soon became criminals as well. The flag is probably also a reference to the United States as a land of opportunity, both good and bad opportunities.

4 Tattoo on Jax’s back

The opening credits end by showing a tattoo of the SAMCRO logo on Jax’s back. The logo consists of a Grim Reaper with an M-16 rifle and a scythe. The Reaper also appears to be holding a crystal ball with the letter A, which stands for Anarchy. Each patched member must have a logo tattoo. Each member’s jacket also has the same image.

Every time someone is expelled from the club, they are required to have their tattoo removed. This was the case with Kyle, who was expelled after abandoning Opie during a robbery. Kyle was given the option to cut or burn his tattoo. He chose to burn, but the pain was too much and he passed out.

Sons Of Anarchy is a global motorcycle club consisting of 48 charters. There are 36 charters in the US alone, and the state of California (where the series is based) boasts a whopping 9 charters. The members of each card have a patch on their jacket that indicates their card as well as their rank.

Sons Of Anarchy, Motorcycle Club Redwood Original (SAMCRO) is the name given to the motherboard. Each SAMCRO has a written “Redwood Original” patch on the front of their jacket.

Although the faces are not that clear, the images are definitely those of First 9 members who served in the Vietnam War. The images are part of the JT documents that Jax finally gets his hands on. The most important of those documents are the letters detailing JT’s concerns about the direction the club was taking.

Cards play the crucial role of influencing Jax to be a better leader. They also open a huge can of worms. Jax finally learns that Clay was responsible for his father’s death.

Weapons are the source of most of the disputes in the series. Clay kills JT because JT wants to get out of the gun business. Jax bumps into Clay because he doesn’t like being in the gun business. SAMBEL and SAMCRO also become enemies due to weapons. Not forgetting that two of the best villains (Gallen and Jimmy O) collide with Sons for weapons.

A good number of the series’ recurring characters also die from gunshot wounds. The gun problem is real. There is hardly a character without a weapon and the opening credits would be boring if they didn’t show the source of all the trouble.

NEXT: Real Life Relationship Status, Age, Height, And Zodiac Of The Main Cast Of Sons Of Anarchy

admin
See also  Digimon: The DigiDestined Crown to its leader (and it is NOT Tai or Matt)