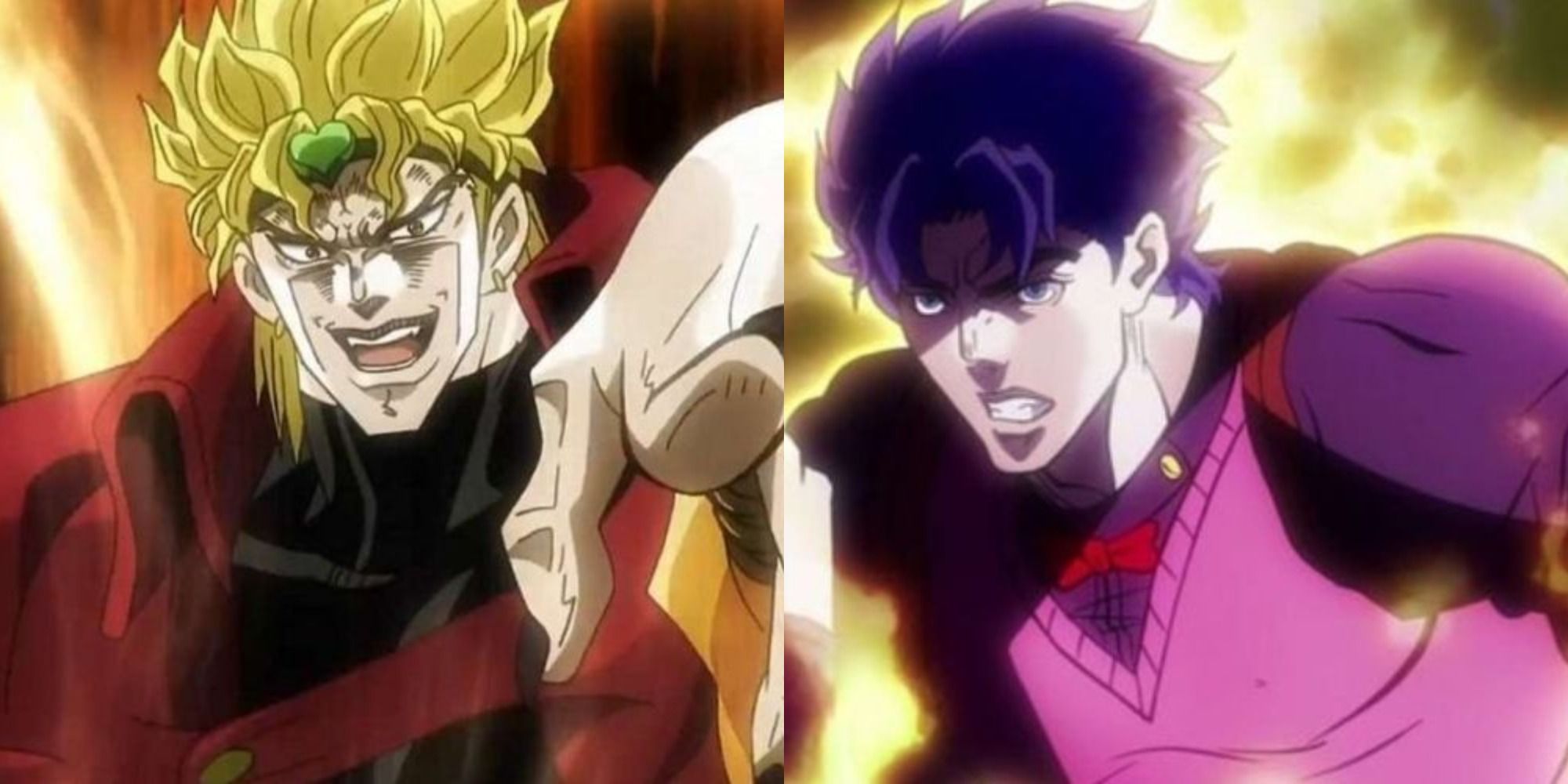 New fans of the long-running shounen battle anime JoJo’s Bizarre Adventure You will probably have been drawn into the series through its iconic battle sequences, dozens of quotable lines, outrageous powers, and memorable characters. However, the series is spreading and to get to that never-ending battle between Dio and Jotaro in Part 3, newcomers to the series will have to watch or read Parts 1 and 2 to get the full context of what’s going on. .

Impatience is a natural human flaw, and it’s not uncommon among an anime fan with a considerable backlog of shows. This trend has given rise to the controversial practice known as “omission of parts” between Jojo fans; where new viewers jump on Part 1 to get to the “good stuff” in Part 3 faster. Practice, while understandable, is wrong, because there are a lot of great things not to miss out on. Ghost blood.

Series antagonist Dio Brando is among the most instantly recognizable anime villains ever devised, and for good reason too. Dio is one of the most relentlessly evil dudes ever put on the page, who seems to exist just to make everyone miserable for their own benefit and to have a good time doing it.

However, Dio’s sadistic antics didn’t come out of the void, and Part 1 does a fantastic job of setting it up as fans of the villains will love to hate the future. Seriously, the amount of sheer nasty this guy does in Part 1 is staggering, making for a character introduction newcomers won’t want to miss out on.

9 The glorious charm of the 80s

Maybe one of the reasons that new fans struggle to connect with Part 1 is the nature of the adaptation (this is a 2012 adaptation of a 1987 Shounen jump manga, after all). The Shounen jump Zeitgeist in the 1980s was defined by titles such as Fist of the North Star, and a host of other stories about huge dudes hitting each other, and Ghost blood it doesn’t exactly break that mold.

Don’t be discouraged though, that’s a critical part of the piece’s appeal. Far from the somewhat subversive tone of others Jojo parts, where heroes are sometimes less than perfectly heroic, Part 1 is a story about an upstanding moral character guy, who fights for love and justice. It may be a bit cheesy by today’s standards, but that’s part of what makes it so much fun.

8 The basis of the JoJo myths

One of the greatest attractions of JoJo’s Bizarre Adventure is that each later part is completely different from its prequel, with a new protagonist, setting, villain, and sometimes powers added to keep the story fresh after being around for decades.

However, there are some consistent themes, tropes, and character archetypes that are common from one party to another, and many of them find their origin, unsurprisingly, in Ghost blood. Although it may lack the totally outrageous fight scenes of the later parts, it does introduce audiences to the DNA that makes it up. Jojo in general.

Studio David Productions adaptation of Jojo it almost always has fantastic music, especially at the beginning and end of each episode, which do a great job of setting the tone for the story. It can be challenging to pick a favorite from such a wide selection, but a powerful case can be made for “Sono Chi No Sadame,” the passionate song that marks the beginning of each episode of Part 1.

In addition to some great visuals that accompany the opening credits (some of which are major spoilers for later events, for those with the advantage of context), the track itself is perfect for an audience to rave about. Jojo.

It would not be appropriate Jojo experience without some standout battle sequences, and Ghost blood is no exception to this rule. During the course of the role, Jonathan will fight zombies, vampires, gangsters, and foster brothers with malevolent intentions to secure honor for himself and his family.

As usual with Jojo, the outcome of a battle is generally decided by ingenuity and strategy rather than brute force (although that plays a role as well). It’s always a great moment when Jonathan seems to be out for the count, but he secretly has a backup plan that will surprise both his opponents and the audience in equal measure.

JojoFight scenes can get a bit obtuse from time to time with their wacky strategies and powers, often to the point where it’s hard to discern. exactly what a character is planning In a fight. To account for this difficulty, Jojo it usually has a dedicated character who is primarily there to act shocked and to explain the events of the battle.

Ghost bloodThe iteration of this archetype is the charming fellow Robert EO Speedwagon, former street thug and future president of the Speedwagon Foundation, who wrestles with a hat with the tip of a razor. Speedwagon’s antics and constant bewilderment over the events of the story make him a great addition to the cast, and a big part of the reason Part 1 is so endearing.

Jojo The stories from Part 3 onwards feature a totally restructured power system for the characters to use in combat. Where Parts 1 and 2 present “hamon”, a kind of kung-fu-like breathing technique that unlocks superhuman powers, Part 3 introduces the audience to “stands”, spectral projections of a user’s spirit who can have an extremely wide range of skills.

While fans generally agree that the switch from hamon to stands allowed the series to come to life and be much more creative with regards to the battle scenes, there is still a lot to love when it comes to hamon. For one thing, there is simply no suitable replacement for yelling “Sunlight Yellow Overdrive!” before you beat the bad boy, that’s the perfect skill name for this anime.

There are a number of important differences between the brackets in Part 3 onwards and the hamon in Parts 1 and 2, the most obvious being the mechanical differences between what each stem allows a user to do. However, there is another notable point of contrast, and that is that while supports are an innate power that the user has, hamon is a technique that must be learned.

This means Part 1 can implement a couple of classic movie-style martial arts training sequences where our protagonist has to learn from a master at his craft to gain the power he needs to defeat the villains. This adds an interesting element of character growth to the power system, which is harnessed to the benefit of the story.

Jonathan Joestar, the protagonist of Part 1, wants nothing more than to become the best knight so he can keep his love interest safe, protect his family’s honor, and try to erase any villainy in the world. He may be lacking the rude and badass Kujo Jotaro or the mischievous charm of Joseph Joestar, but it’s impossible not to be loved by Jonathan’s seriousness and strength.

Joseph’s simple goals and uncompromising moral fortitude make him one of the best Jojo protagonists in the lineup; does not spend much time pondering or doubting himself, which makes him an easy guy to cheer on. Overall, Part 1 is a somewhat unequivocal struggle between good and evil, which is why Jonathan is the perfect guy for the job.

One of the most repeated complaints about Ghost blood is that it lacks a lot of the trademark Jojo surrealism that makes the series so strange (after all, it’s in the name). To a certain extent, this is correct, since Ghost blood it’s missing some of the eccentricities audiences know and love in later parts.

However, don’t get carried away by a false sense of security, because author Hirohiko Araki has a few surprises up his sleeve even in this first adventure. Without getting too far into spoiler territory for those who haven’t started yet, the ending in particular of Ghost blood it’s hard to see coming, and it changes the direction the series seemed to be taking beforehand.


next
Naruto: 10 times Shikamaru is the most identifiable character