Metalocalypse: how the Adult Swim series crashed into the comics 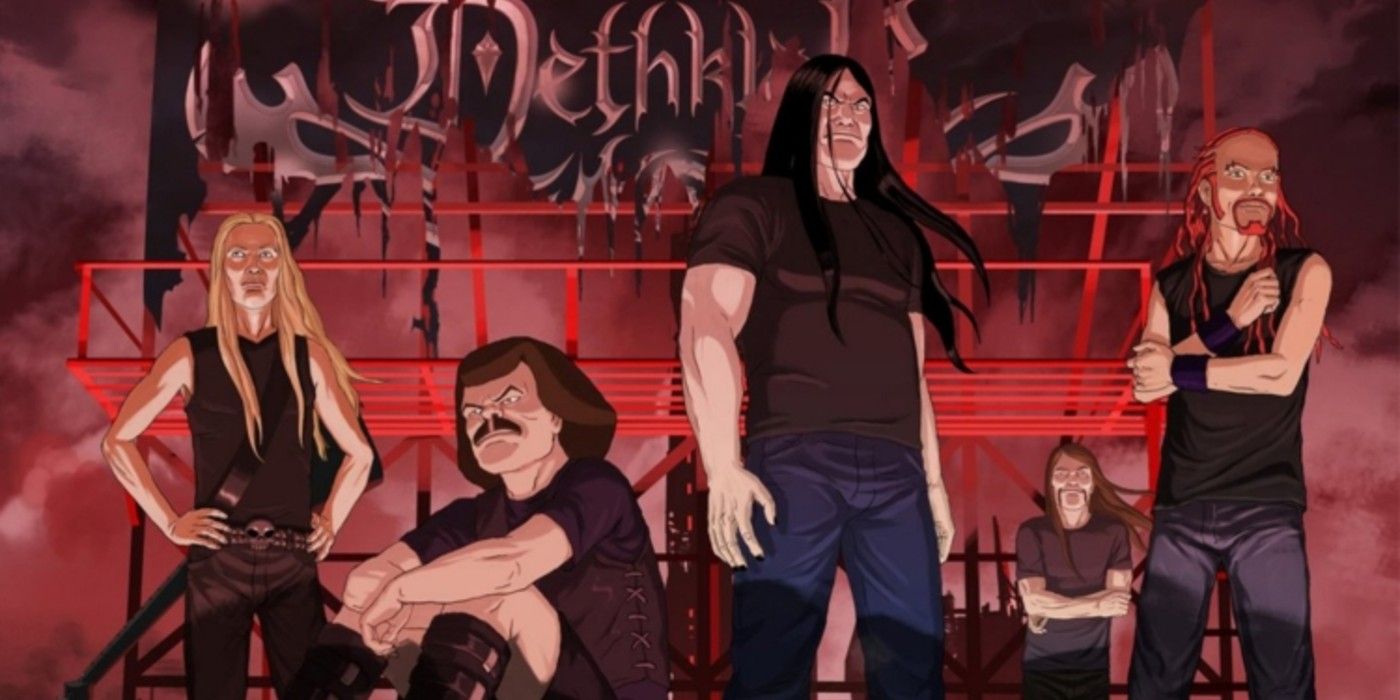 After jumping out of Adult Swim’s cartoon Metalocalypse, the Dethklok members once had their own Dark Horse miniseries and The Goon crossover.

After ending years ago, the Adult Swim fan-favorite series Metalocalypse will receive a feature film that will take heavy metal musicians Dethklok to their biggest stage yet. And while Dethklok has a long and bloody history on the small screen, they have made their way through the comics as well.

In 2010, Dethklok made his most prominent appearance in the comics in Dark Horse. Metallocalypse: Dethklok by Brendon Small, Jon Schnepp, Jeremy Barlow, Lucas Marangon, and Thomas Mason. This three-part series, Metallocalypse: Dethklo, he managed to transfer most of his ultraviolent and surprisingly dry humor to the page. Like the original series, each edition of the comics was its own separate story.

The comic begins with the gang arguing with each other over the minutiae regarding their latest branded product while ignoring their manager, Charles Foster Offdensen. The band’s drummer, William Murderface, is always finding any way to fight the other members. Soon enough, Toki, Pickles, Skwisgaar, and Nathan Explosion have come up with their own brutal food concepts to enter their next line of frozen meals, and the results couldn’t be worse.

Dethklok, as successful as they are, constantly makes his obedient fanbase suffer, and his frozen food is no different when the band’s incompetence leads to mass poisoning and death. What follows is a trip back to Finland, specifically to the town of Espoo, where their previous concert had unintentionally awakened a cannibal troll from deep beneath the ice. Their return journey turns into a bloodbath when an ancient masochistic cult arrives to bring back the trolls. Once again, the members of Dethklok are miraculously unharmed as the landscape around them turns into unfettered chaos.

His subsequent cross-country train gig goes even worse when he dives into the ocean with all his passengers on board – except for the band, of course. All of this over-the-top death and destruction, one of the cornerstones of the series’ comedy, is almost perfectly encapsulated in the Dark Horse limited series. Although his own series was the last time Dethklok found life in the comics, his decidedly non-canon crossover with The bully the year before at least he gave fans another concert on paper to enjoy.

In 2009, Dethklok vs. The Goon by Eric Powell and Brendon Small saw another cult create serious problems for the band by using Murderface and his tragic bloodline to send Dethklok’s citadel, Mordhaus, crashing into the world of The Goon along with a Doctor Rockso washed from Brain, the Rock n ‘Roll clown who had been programmed to kill the band. The macabre world of The bully It was close enough to home for the Dethklok members to assume they were in Cleveland before throwing a furious concert. Unfortunately, the Goon’s friend Franky is shot and killed by Rockso, sending the Goon into a violent frenzy of its own. It didn’t take long for the Goon to take down Dethklok’s guards before turning his attention to the stage, and with an ax to Murderface’s head, all of Mordhaus returned to its rightful universe.

The bully Y MetallocalypseAlthough they are not analogous to each other, they have always shared a similar sense of humor regarding violence, drugs, and sexuality. It’s no wonder its single-shot crossover lands as well as it did, even if there are moments that haven’t aged particularly well. While the likelihood of ever seeing these two crossed paths elsewhere is slim to none, the fact that the comedy of Metallocalypse Can be translated into comics means there’s hope for more of Dethklok’s antics on store shelves eventually, and maybe even a rematch.

Juggernaut vs. Captain America’s Shield: What Happens When They Collide?