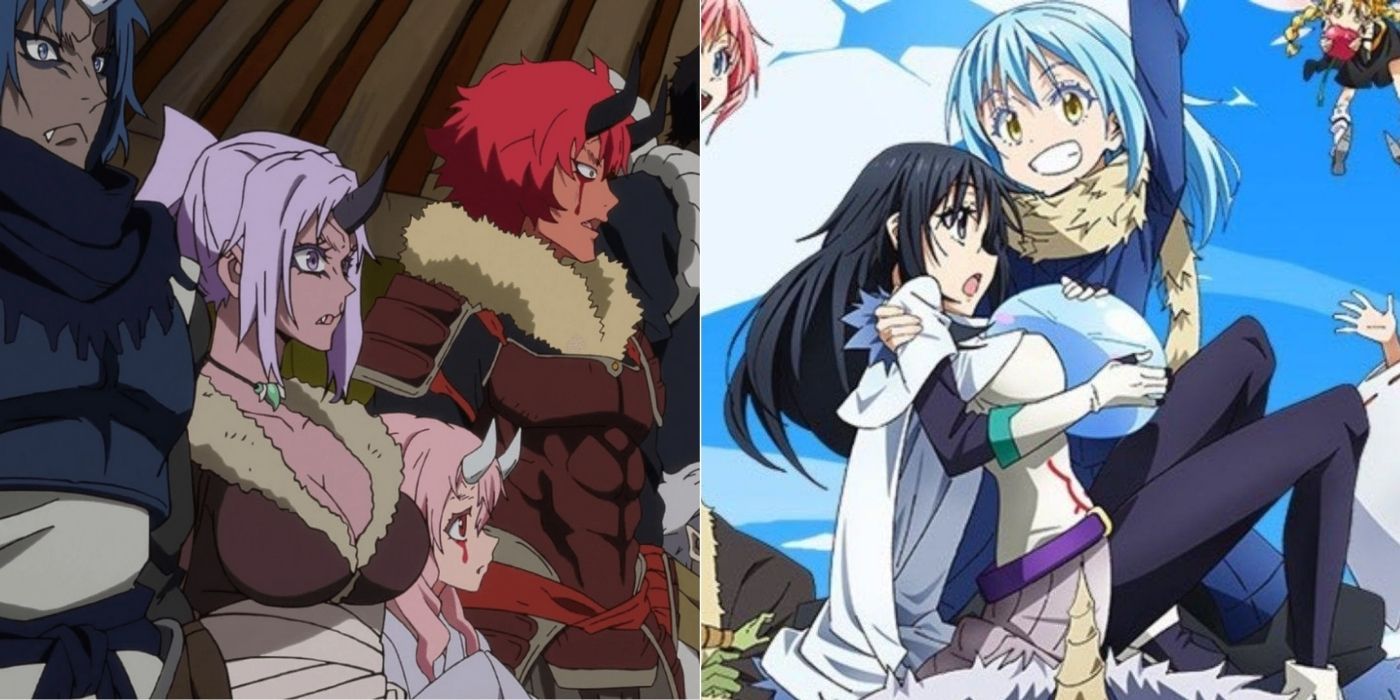 RELATED: That Time I Got Reincarnated As A Slime: 10 Best Characters, Ranked By Likability

Along the way, Rimuru makes many new friends who help him make his dream come true. The different monsters that come to call the Jura Tempest Federation home are all unique, and fans can find something to love in each one.

Shuna, a former Kijin princess and Benimaru’s younger sister, is a kind and patient young woman who is wise for her age. Shuna fans are diplomatic and balanced and are happiest when they are entrusted with important responsibilities and have the opportunity to work and meet different types of people.

Shuna can be competitive and is very possessive of Rimuru at times. That said, he is not afraid to let Rimuru know when he disapproves of his behavior, such as when he scolded him for attending the elf bar in the Dwargon Armed Nation during a diplomatic mission. She is comfortable being herself and enjoys working with fabrics to create fabulous garments for her fellow monsters.

Gobta, one of Hakurou’s first martial arts students and the captain of the Goblin Riders, is a competent individual who is often mistaken for a fool. Gobta fans are talented by nature and quite intelligent, but they enjoy being silly and try not to take life too seriously.

Gobta is one of the few Hobgoblins who continued to look like a normal Goblin even after his evolution. Despite his appearance, he is a skilled fighter and very loyal to his friends. When Gobzo is accused by Kirara Tachibana of attacking her, Gobta does not lose faith in his friend and implicitly trusts that he is innocent. He is a capable leader and quickly rises through the ranks to become one of Rimuru’s most trusted lieutenants.

Hakurou, a legendary sword master and martial arts instructor, is incredibly wise and insightful. Hakurou fans are normally calm even in stressful situations and pride themselves on excelling in their chosen craft, which includes a willingness to put in endless hours in the pursuit of perfection.

Hakurou is notoriously strict and does not tolerate complacency or laziness of his students. Although he normally speaks very softly, when his anger is aroused he can become passionate and even a bit sadistic. This streak of anger was on display during his fight with Kyoya Tachibana, when Hakurou humiliated the Otherworldly swordsman by causing his dismembered head to see his lifeless body fall to the ground after defeating him in a duel.

Former prince of the Lizardmen and current assistant in the research department of the Jura Tempest Federation, Gabiru is an unsuspecting young monster who is loved by his subordinates. Gabiru fans are very charismatic and quirky and love to be the center of attention wherever they go.

Related: Rimuru Tempest’s Top 10 Powers At The Time I Got Reincarnated As A Slime

Gabiru is very brave and a natural leader, inspiring his loyal followers to heroic deeds with his mere presence. While he is naturally talented, he can overestimate his abilities, such as when he underestimated Gobta during their duel and was quickly knocked unconscious. That said, he is willing to admit when he is wrong and is genuinely dedicated to the success and safety of his fellow Lizardmen and other monsters.

Shion, Rimuru’s main bodyguard and personal secretary, is a young and impulsive Kijin who likes to tackle problems head-on with force. Shion fans are very passionate and they tend to pour their heart and soul into everything They do it regardless of the consequences.

Shion is quite clumsy and tends to act quite clueless in more refined and delicate situations. During Rimuru’s diplomatic trip to Dwargon, he got drunk on the alcohol Rimuru brought as a gift to King Gazel Dwargo and quickly passed out. While she tends to solve most problems with violence, she is extremely loyal and courageous, and these qualities make her the perfect protector for Rimuru.

The leader of the Tempest Wolf Clan and son of the former head of the Direwolves, Ranga is absolutely devoted to Rimuru. Ranga fans are incredibly loyal and do not hesitate to show their affection to their friends and their fangs to their enemies.

Ranga is very proud of his position as Rimuru’s personal steed and is always alert and ready to be called into action. He is very protective of Rimuru and is also eager to please, as seen by his quick response to Rimuru’s calls whenever he is summoned from the shadow of his master. With strangers, he can be quite rude and suspicious, but once you have earned his trust, he is very affectionate and freely offers his time and attention.

One of the Kijin in Rimuru’s service and the leader of the Shadow Squad, Souei is a simple young monster who takes his responsibilities very seriously. Souei fans are generally composed and operated very efficiently even though they also harbor some delusions of grandeur.

Souei is absolutely ruthless when at work and does not allow her personal feelings to interfere with her work. He is very confident and does not tolerate excuses or laziness from his subordinates. However, in times of peace, he enjoys daydreaming and will temporarily relax his stoic personality and have fun with his friends.

Milim, one of the oldest Demon Lords and the only known Dragonoid from the series, is a carefree girl who turns to violence and mayhem as a way to avoid boredom. Milim fans cannot stand the rules and easily tire of normal routines, preferring to live dangerously and to the beat of their own drum.

RELATED: 10 Best Fights At The Time I Got Reincarnated As A Slime

Milim has a short temper and is often enraged when she doesn’t get her way. However, his childlike nature is also a carefully crafted facade, and when he’s serious, he’s a truly deadly and cunning character. Once she’s made up her mind about something, she can be very stubborn, and until she met Rimuru, she was very hesitant to call someone a friend.

Benimaru, Shuna’s older brother and commander-in-chief of Tempest’s military forces, is an excitable and headstrong young man. Benimaru fans appreciate their independence and can act quite arrogant, but are willing to dedicate themselves to the people and causes they respect.

Benimaru does not dare to take responsibility, and feels more comfortable when can go crazy and throw himself into the heat of battle. However, he is also quite thoughtful and devious and is a competent leader. He normally acts quite nonchalant, but when his blood boils, like when his friends are in danger, he becomes extremely fierce.

The leader of Tempest and the main protagonist of the series, Rimuru is caring and sincere, but also fiercely loyal to his friends and allies. Rimuru fans are laid back and a bit naive, but they can also work tirelessly to achieve a goal that is important to them.

Rimuru has a habit of making jokes at inappropriate times and often feels lost in his new home. At the same time, he is dedicated to making Tempest a safe and comfortable home for monsters, and his subordinates look up to him. He is normally cheerful and carefree, but when his friends are in danger He is capable of flipping a switch and getting deadly serious..

NEXT: The Isekai Truck And 9 Other Hilariously Used Anime Tropes We Love


next
10 anime characters who could beat Pennywise the Clown

Patrick Sather is a writer living in Irvine, California. A graduate of the University of Nebraska – Lincoln with a BA in Creative Writing, he strives to create engaging content for ScreenRant readers. She currently works in finance, but dreams of one day having her own board game and a coffee in the escape room. He divides his free time between writing about anime, working on his first novel, discussing philosophy with his wife, and chasing after his young daughter.