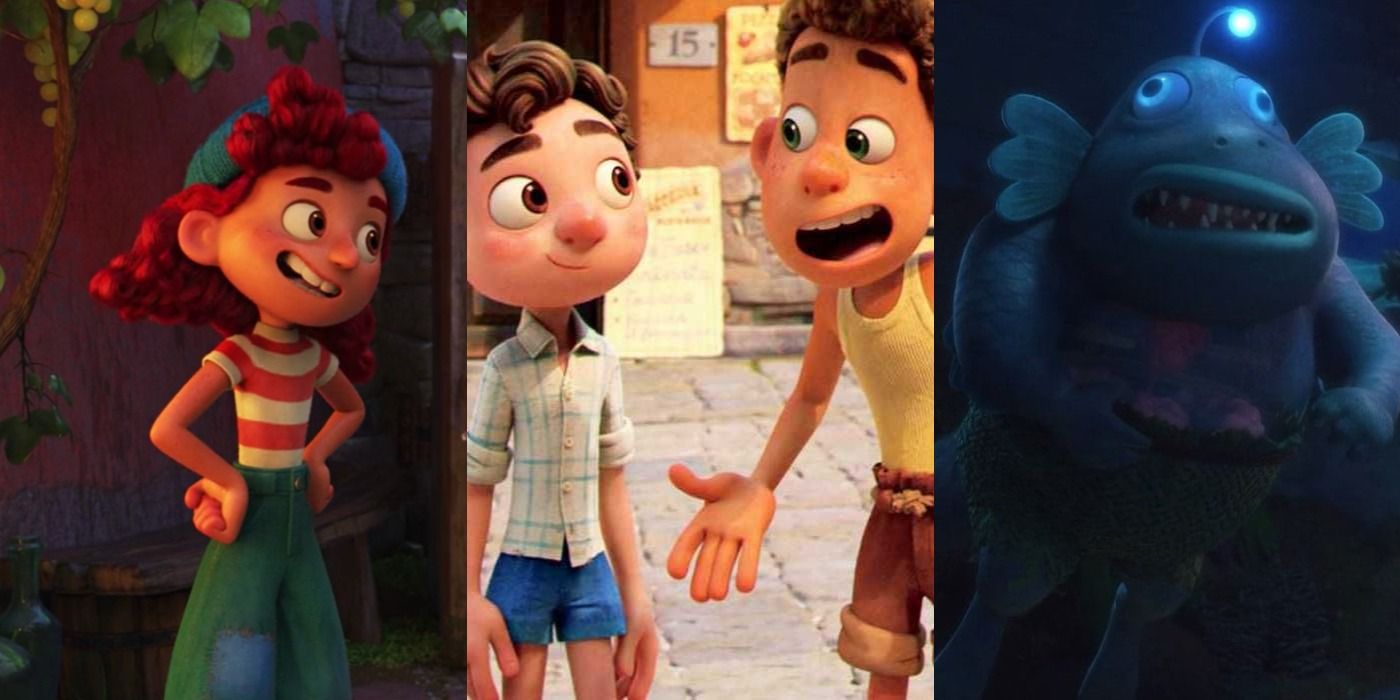 From Pixar Luca It is the last film to come to Disney +. Every time a new Pixar movie is released, expectations are always high, given the studio’s impressive track record. As always, this Pixar film balances a comedic and dramatic tone that audiences of all ages can enjoy.

RELATED: 10 Movies About The Ocean To Watch Before Pixar’s Luca

The movie contains exceptional animation, personable characters, and a magical story, which is to be expected from the studio at this point. These elements come together to create memorable scenes that are sure to resonate with audiences and possibly become iconic over time.

In the opening scene of the film, two fishermen take their boat out to sea at night. As they make their way through the water, they begin to talk about the sea monsters, debating whether or not they exist. As they speak, a sea monster becomes visible, stalking through the water and snatching some of their belongings from the boat, terrorizing the fishermen.

The scene succinctly presents the dynamic between sea monsters and humans, establishing the central conflict for the rest of the film. Humans aren’t sure if sea monsters exist, but if they do, then humans are scared and want to kill them.

When Luca’s parents discover that he has been escaping to the surface with Alberto, they decide to send Luca to the deepest part of the ocean to live with his uncle Ugo, causing Luca to run away from home.

Uncle Ugo rambles over the whale carcasses, losing consciousness at one point due to changes in oxygen levels, and needs Luca to punch him on his translucent chest to restart his heart. This interaction is possibly the funniest scene in the movie, thanks to Sacha Baron Cohen’s hilarious vocal performance as Uncle Ugo.

8 Luca and Alberto swimming together

After discovering that Luca’s parents intend to send him to live with Uncle Ugo in the deepest part of the ocean, Alberto convinces Luca to flee with him to the human city of Portorosso in search of a Vespa that the two of them they can use to explore the world.

As they travel to Portorosso, they jump off a cliff into the water and happily swim and jump, in and out of human form. It’s a joyful and beautifully animated sequence that perfectly captures the excitement and optimism Luca feels at the moment.

When Luca and Alberto first arrive in the small fishing village of Portorosso, Luca is nervous because he has never interacted with humans before, but Alberto seems confident. The two of them stroll through the city and Luca is finally able to observe human culture for the first time.

RELATED: Pixar: 10 Things All Movies Have In Common

She is overjoyed when she hears people talking in a coffee shop, sees men playing cards, and eats ice cream for the first time. After wanting to experience life on the surface, Luca finally manages to fulfill his dream.

6 The truth about Alberto living alone

After Luca and Alberto get into a fight when Giulia discovers the truth about Alberto and Luca hides his identity, Alberto returns to his home island. Luca tracks him there to apologize and, while there, discovers that Alberto was abandoned by his father and has been living alone.

It’s a sad and dramatic scene in which Alberto admits that he thinks he just messes everything up and deserves to be alone. Effective and moving, the scene configures the arc of Alberto’s character and ends up having great implications at the climax of the film.

After the Portorosso Cup race, Alberto finally gets his wish and can buy a Vespa with the cash prize. As Giulia prepares to leave town and return to her school for the semester, the three characters stop and talk about all the places Alberto will travel with his new Vespa.

Luca and Giulia come out of the shot but Alberto stays behind, hesitating to put down his Vespa. He looks back and forth between his friends and his Vespa, seemingly choosing between the two before smiling and chasing after them. It is a subtle moment, but it is the culmination of Alberto’s arc when he confirms his decision to sell the Vespa and stay in Portorosso with Massimo.

4 The debut of “Silencio, Bruno”

Throughout the film, Luca is more reserved and anxious than Alberto. When Alberto tries to convince Luca to go down a steep hill on his homemade Vespa, he explains his secret to overcoming fear. Alberto calls the negative voice in his head Bruno. Whenever he feels the voice discourages or discourages him, he says “Silence, Bruno” and encourages Luca to do the same.

“Silence, Bruno” becomes a repeated refrain throughout the rest of the film. The phrase shows the growth of Luca’s character as he learns to silence negativity and fear in his mind.

Luca loses his initial chance to be Alberto’s good friend when Alberto’s identity as a sea monster is revealed to Giulia and Ercole. Instead of showing solidarity, Luca continues to pretend to be human. However, Luca redeems himself at the end of the triathlon when it starts to rain.

Alberto returns to his sea monster form and the townspeople try to kill him. Instead of hiding, Luca reveals the truth and stands up for his friend, showing Alberto that he is no longer alone.

At the end of the movie, all the main characters gather at the train station to say goodbye to Giulia as she returns to school. Alberto reveals that he sold the Vespa to pay Luca to go to school with Giulia and has even convinced Luca’s parents to accept the plan.

Alberto stays with Massimo, but thanks Luca for helping him leave the island where he lived alone. Luca says goodbye to his parents and his friend and gets on the train. He cries when the train leaves the station, but then he can’t help but smile as he gazes at the world before him.

When Giulia realizes that Luca doesn’t know what stars are, she takes him to her telescope and begins teaching him about the cosmos. He is immediately fascinated when he discovers how much bigger the universe is than he ever thought.

In a superbly animated dream sequence, Luca imagines himself running over Saturn’s rings, flying over the Roman Colosseum, and witnessing the events of Pinocchio as Giulia teaches him. This is the moment that sparks his passion for learning and ultimately leads him to follow Giulia to school.


next
Star Wars: 5 Bounty Hunters That Are Legends (& 5 That Deserve More Attention)

Shane Redding is a writer living in Nevada, United States. He received a master’s degree from the New York Film Academy in Los Angeles, California. He now works as a Screen Rant List writer for Valnet, Inc. In his spare time, he enjoys playing and watching sports, theme parks, escape rooms, board games, and spending time with family.

admin
See also  How to cut stone in the Midgard tribes