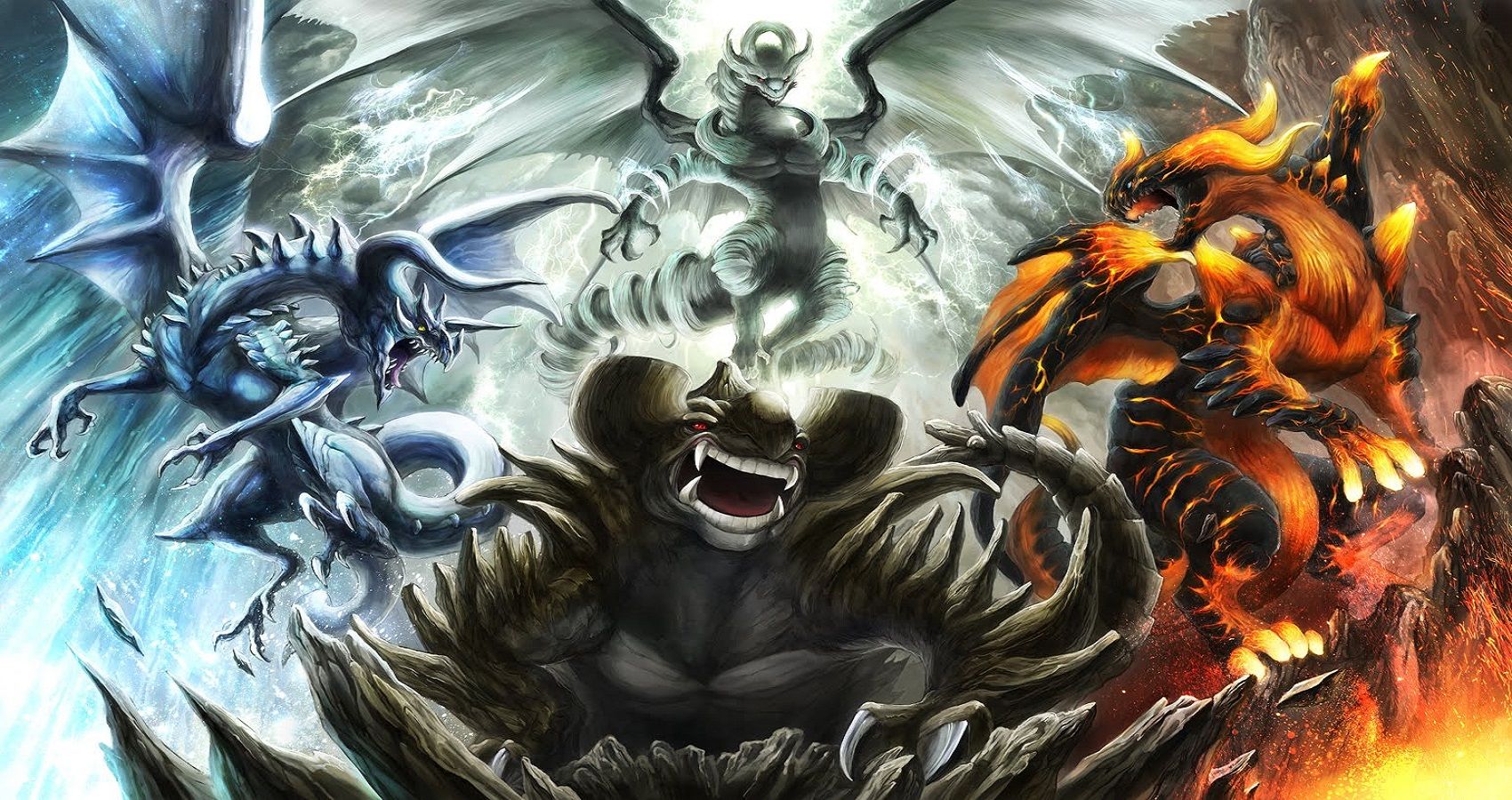 Dragons are one of the oldest Yu-Gi-Oh! archetypes in the trading card game’s history, with Blue-Eyes White Dragon being Seto Kaiba’s signature monster in the original Yu-Gi-Oh! series. Since then, Konami has been enthusiastic about supporting Dragon archetypes and it’s not difficult to see why.

RELATED: 10 Controversial Yu-Gi-Oh! Cards That Were Censored Outside Japan

Kids and adults alike love them, and Konami knows exactly what to do with them: make them big, powerful boss monsters with high attack power and incredible effects. There have been many Dragon decks in Yu-Gi-Oh! with some consistently strong while others needed support to make them worth using.

Updated on July 7th, 2021, by Brittanie Maldonado: Yu-Gi-Oh! is an overwhelmingly popular game that’s managed to stay relevant for decades. Dragons are a popular monster type in Yu-Gi-Oh! that have consistently received support since the game first came out. It’s been a little over a year since this article was published, so it’s worth checking if any archetypes received deck support to make them more relevant.

Some of the monsters’ card effects can even keep opponents from activating card effects until the end of the turn. Adding additional support to the deck can further strengthen Red-Dragon Archfiend’s aggressive control of the field.

When Ice Barriers first dropped, they were expected to be a strong lockdown deck. Unfortunately, the initial release lacked the support for Ice Barriers to be worth playing since they weren’t able to easily swarm the field and get the key synchro summon Dragons out. The structure deck Freezing Chains, however, changed everything for Ice Barriers, namely its ability to swarm and synchro summon.

This structure deck came out in early 2021 and included Trishula, Zero Dragon of the Ice Barrier. Trishula Zero Dragon lets players banish up to three cards their opponent controls and also summons the original Trishula upon its destruction.

Odd-Eyes Dragon is the signature monster for Yuuya Sakaki in Yu-Gi-Oh! Arc-V, making this another anime-based deck. Odd-Eyes Dragons have a lot of utility in summoning methods, including card effects that allow deck searches.

Odd-Eyes Pendulum Dragon is a central card that gets this strategy going since its pendulum effect allows it to search the deck for a Pendulum monster with 1500 attack or less from the deck. The player can then add that monster to their hand, making it easier to set the field for a victory.

Z-Arc also can’t be destroyed by opponents’ card effects, and when it’s in the pendulum zone, it prevents opponents from activating Xyz, Fusion, and Synchro monster card effects.

One of the oldest types of domineering dragon decks, Disaster Dragon wasn’t really an archetype. Instead, the deck took advantage of Dragon monsters with powerful effects and high attack to create an aggressive deck with mild lockdown abilities.

This deck focuses on using Lightpulsar Dragon, Eclipse Wyvern, and Darkflare Dragon for their card effects, which allow unique methods of banishing or special summoning themselves. This technique works perfectly with both Red-Eyes Darkness Metal Dragon and a host of new cards.

Chaos Dragon was known for being able to drop multiple big bosses like Black Luster Soldier, Red-Eyes Darkness Metal Dragon, and even Five-Headed Dragon. Most impressively, Chaos Dragon could do all that in a single turn.

Not strictly using just Dragons, Dragunities are actually partially made up of Winged-Beasts. The Winged-Beasts are based on ancient Greek military terminology and the monsters have names like Legionnaire and Phalanx while the Dragons are named after weapons or battle formations.

The Winged-Beasts unite by equipping the Dragons and gaining effects, which often involves destroying other monsters on the field. Dragunities specialize in synchro summons, which helps them make bigger dragons with incredible effects to help them win the game.

Using Egypt’s mythology and hieroglyphs as a focus, the Hieratics have a unique method of summoning that often involves tributing monsters from the hand to summon themselves onto the field. The monsters tributed could then special summon other monsters from the hand, deck, or graveyard with card effects, but reduce the special summoned cards to zero attack points and defense points.

The main goal there is to use the special summoned monsters as Xyz materials, making the zero attack and defense unimportant. Alternatively, they can also Link summon.

There are plenty of good Red-Eyes cards, like Red-Eyes Flare Metal Dragon, which inflicts damage to the opponent every time they activate a card or effect— a built-in burn that can do consistent damage. Another great Red-Eyes card is Archfiend Black Skull Dragon, which has excellent burn capabilities.

When this fusion monster attacks, its card effect lets it target a Red-Eyes card in the Graveyard and inflict damage to the opponent equal to that Red-Eyes’ attack points. Then, it shuffles the card into the deck.

The Galaxy-Eyes deck was introduced in Yu-Gi-Oh! ZEXAL as a deck used by one of the lead rivals, Kite Tenjo. The key card of this deck is Galaxy-Eyes Photon Dragon, a level 8 dragon with 3000 attack that special summons itself by tributing two monsters with 2000 or more attack.

Obviously influenced by Miss Kobayashi’s Dragon Maid, Dragonmaids are a newer Dragon deck introduced at the very end of 2019. The deck has a unique way of including both the cute, humanoid maids and their giant dragon forms. Half the deck is made up of lower-level maid monsters while the other half are level 7 and 8 full dragons.

The deck swarms the field with lower-level monsters before the Battle Phase but transforms them into their full dragon forms for the battle, only to go back to their maid versions when the fighting’s done.

Surprisingly, the average Blue-Eyes deck continues to use its vanilla version. In fact, Blue-Eyes decks make the deck’s entire strategy center around vanilla Blue-Eyes cards. Blue-Eyes Alternative Dragon has identical stats of 3000 attack and 2500 defense and summons itself by revealing a vanilla Blue-Eyes from the hand. Its card effect can also destroy a monster on the field every turn.

With the ability to place several 3000 attack bodies on the field at once, they’re a one-turn-kill-centered deck that can be tough to take down.

Yet another anime deck, Rokkets are used by Varis, the primary villain in the first season of Yu-Gi-Oh! VRAINS. The deck’s design is based on weapons and ammunition (they’re called “Bullets” in the Japanese version), and they work specifically with the Link mechanic in the game.

When targeted by Link monsters (either an opponent on their own), they gain card effects. And when destroyed, they can replace themselves with new monsters from the deck. This deck can also turn into a pretty monstrous lockdown deck with one-turn-kill potential if they have the right support from other cards outside their archetype.

One of the most powerful decks ever created, this archetype was introduced during the Xyz era and proceeded to break the game wide open. It consisted of only eight monsters: four level 7 monsters, two level 3 monsters, and two level 4 monsters. The incredible synergy they were capable of allowed them to place multiple high attack monsters on the field with ease.

They can also be turned into Xyz monsters to remove the restrictions from the Dragon Rulers themselves. Ultimately, Konami banned this deck in April 2015 because it was too strong. Only one of them has been unbanned since.

NEXT: Yu-Gi-Oh !: The 10 Most Iconic Archetypes, Ranked


Next
Anime’s 10 Most Awkward Couples

Staff Writer for CBR, Sage Ashford has also written for Comicon as well as other sites such as The Gamer, and has been doing freelance work since 2014, and been working for CBR since 2017. His focus is primarily on spreading the word on obscure anime , comic books, and games whenever possible. Follow him on Twitter @ sageshinigami, or on Twitch @ sageshinigami.