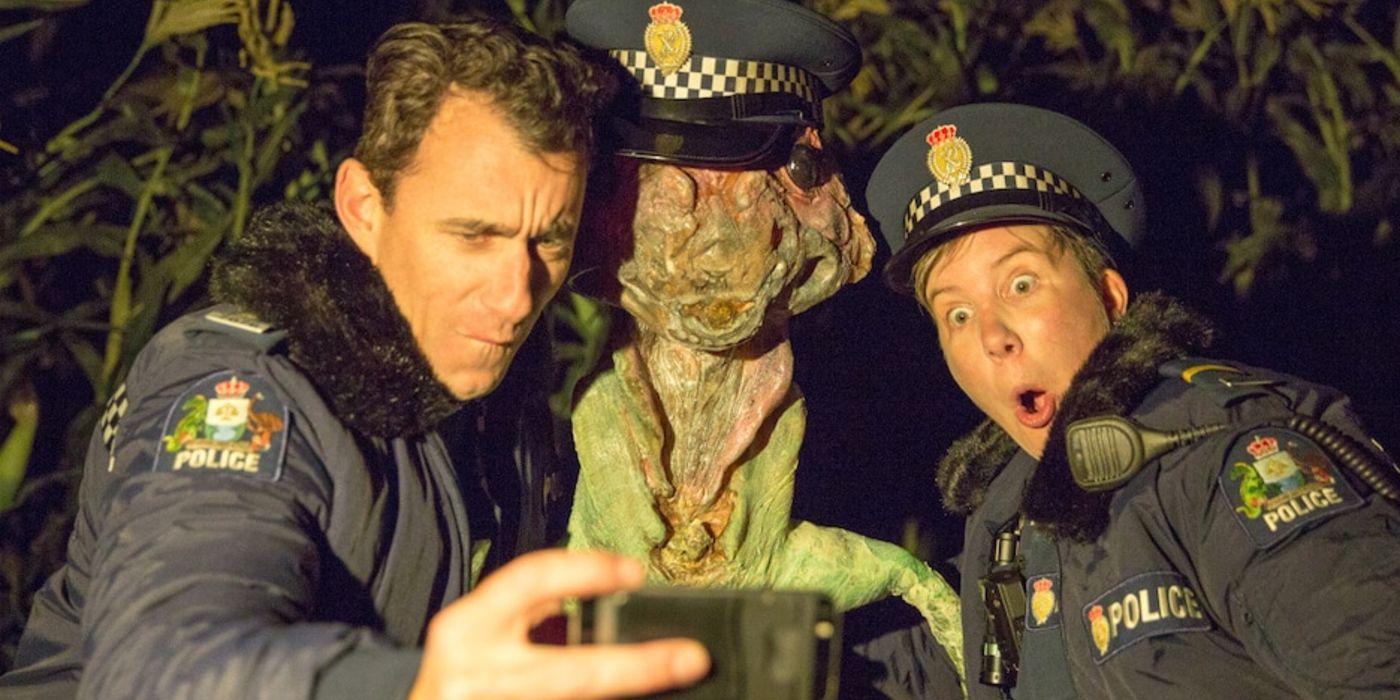 Wellington Paranormal, a spinoff of What We Do in the Shadows, has been in New Zealand since 2018, but only made it to the US in 2021.

Paranormal Wellington, the paranormal comedy series by Taika Waititi and Jemaine Clement, finally debuted in the United States three years after its initial debut in its native New Zealand. It’s a wonder why the series took so long to reach American audiences, as it is one of two televised spinoffs of the modern cult classic film. What we do in the shadowsThe other is the FX series of the same title that has garnered critical acclaim and an impressive following in its own right.

Paranormal Wellington follows the inept buddy duo of Officers Minogue and O’Leary, who first appeared on What we do in the shadows like a couple of cops investigating the vampire residence for any supernatural activity. In the movie, the two were hypnotized into believing that vampires weren’t a threat, but the joke is that these two jerks probably didn’t need much convincing. On the show, Minogue and O’Leary are supervised by the also incompetent Sergeant Ruawai Maaka, who recruits officers to join his paranormal task force.

The series first premiered on New Zealand’s public broadcasting station TVNZ 2 in 2018, which actually means it predates FX. What we do in the shadows Show. However, Paranormal Wellington It was never granted international distribution rights beyond neighboring Australia until 2021, when British broadcasting giant Sky licensed all three seasons for the company’s Now streaming service, as well as its Sky Comedy channel. Similarly, WarnerMedia has purchased the US distribution rights to the show under the first joint acquisition between HBO Max and The CW. Due to the deal, the new episodes will premiere on The CW before being released for broadcast on HBO Max a day later.

The smaller-scale production of Paranormal Wellington It may be one of the reasons why it took so long for the series to travel beyond its native borders. The show is produced by the independent New Zealand Documentary Board, which is really just Jemaine Clement’s mockumentary company. Unlike, What we do in the shadows is backed by FX’s in-house production company and incorporates creative talent from outside of New Zealand. CW and HBO Max are the US distribution platforms for Paranormal Wellington, but FX specifically produces What we do in the shadows for your own network.

The difference between production and distribution rights explains why Paranormal Wellington It first debuted in its native country, but three years is still a long time for a show to travel to American television screens. The wait may be because no major distributor wanted to risk the show’s distinctly New Zealand humor, packed to the brim with dry, deadpan delivery and references to local Wellington culture and geography. What we do in the shadows, with its more recognizable guest stars and cultural commentary, it may have seemed more accessible to American audiences. Fortunately, the massive success of the latter likely contributed to the long-awaited arrival of the former in the United States.

Next: How Wellington Paranormal Connects With What We Do In The Shadows

Andrew is a contributing article writer for Screen Rant Horror, as well as Comic Book Resources. He likes trying to see what social commentary he can glean from the latest horror movies, as well as checking out what’s going on in Spider-Man’s life. He also plays bass to exorcise his negative emotions, as good Mr. Rodgers says he should.