Black widow: what all the Red Guardian tattoos mean 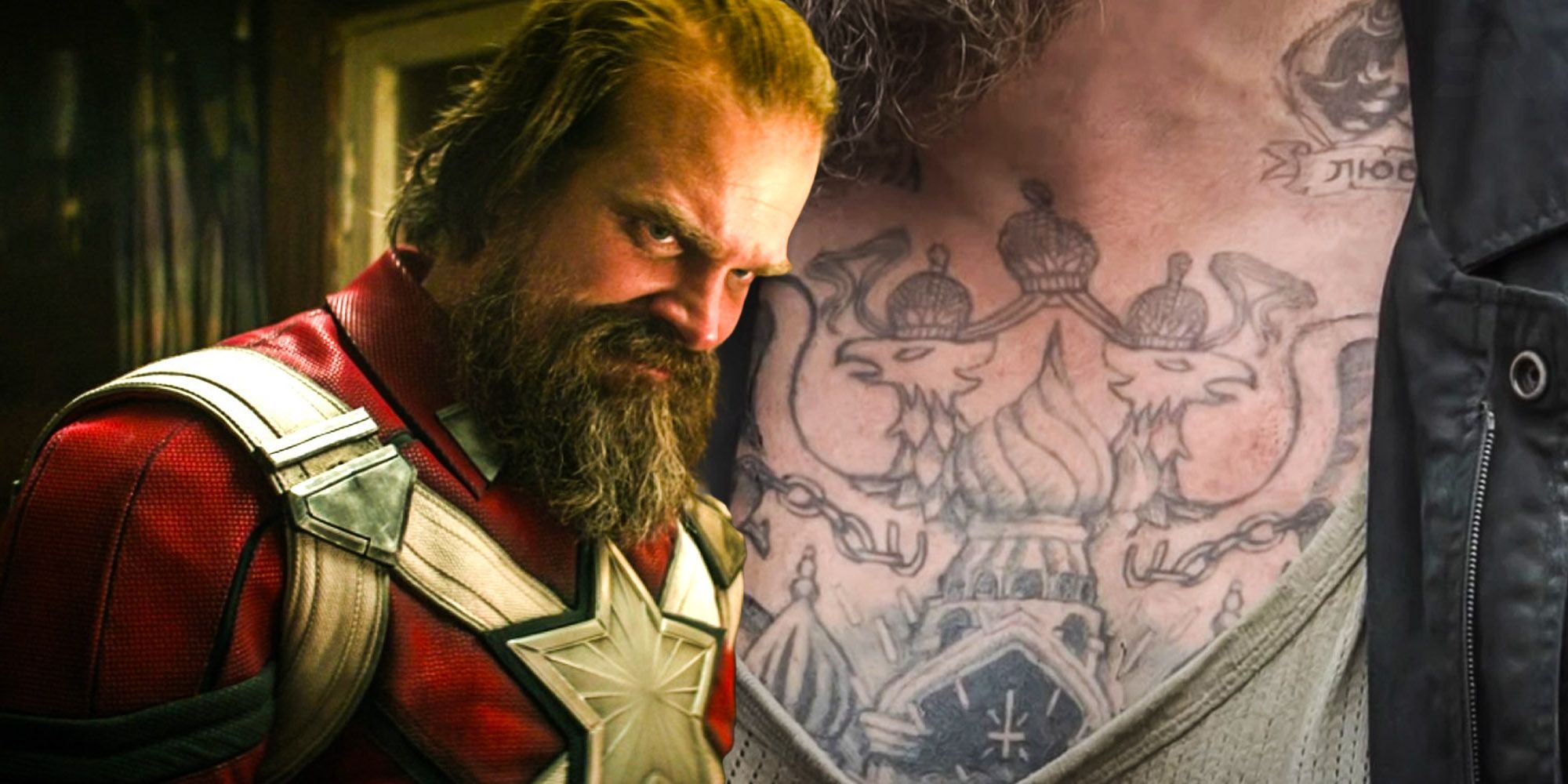 The Red Guardian, played by David Harbor, is one of Black Widow’s most colorful new characters – here are all of Alexei’s tattoos, explained.

Black widow introduced the colorful character Red Guardian to the MCU, but what do all his tattoos mean? Alexei Shostakov, played by David Harbor, was the surrogate father to Natasha (Scarlett Johansson) and Yelena (Florence Pugh) and his tattoos weren’t there in those flashback scenes. There is no evidence of these tattoos on a younger Alexei, which means that it is likely that most, if not all, of his tattoos were acquired during his time in a Russian prison, which makes sense since prison tattoos Russians are a long tradition. Still, if one looks closely at the Red Guardian’s ink, the story of his life is there to read on his skin.

Alexei and Melina (Rachel Weisz) were assigned to an undercover mission in Ohio in the ’90s, with Natasha and Yelena serving as their fake children to complete their charade. After Alexei allowed Natasha and Yelena to return to the Red Room, their reunion was less than comforting. Alexei is blinded by longing for his good old days as the Red Guardian when he was the Soviet Union’s version of Captain America. But when he reunites with his daughters and his former “wife”, he is reminded that there is more to life than his personal glory.

After spending years in prison, Alexei comes out covered in tattoos. Most of them represent the important things in his life: his country, his found family and himself. Some, however, are just common tattoos between criminals and prisoners. Here’s a breakdown of the Red Guardian tattoos and what they all mean.

One of Alexei’s most notable tattoos is the words “Karl Marx” on his knuckles. This is a mockery of the “love-hate” tattoos traditionally found on the knuckles. Karl Heinrich Marx was a German-born philosopher, political and social revolutionary theorist. Marx wrote “The Communist Manifesto” and was the father of Marxism, a political theory that constituted half of the political praxis of the Soviet Union. On his left abdomen he has a tattoo of Vladimir Lenin’s head. Lenin was the prime minister and founder of the Russian Communist Party. Being a hero of the Soviet Union, it makes sense that the Red Guardian wants to pay tribute to these two men.

The double-headed eagle, proudly displayed on Alexei’s chest, is another symbol of Russia. The double-headed eagle was once an important part of the coat of arms of the Russian Empire, although its use was eventually withdrawn due to its connection to the Tsarist government. Often this tattoo was done by prisoners during the Soviet era to show anger and contempt against the regime; If Alexei got this tattoo in prison after Dreykov’s betrayal, it would make sense that he would have some contempt for the people who imprisoned him. This symbol can also be seen on the Red Guardian shield in the comics.

While Alexei tried to claim that his time in Ohio meant nothing to him, his tattoos say otherwise. On his arm, Alexei has a tattoo of two roses. Under the flowers there are two names in Cyrillic script; Наташа and Елена, which translate into Natasha and Yelena. All these years later, it is clear that Alexei still has affection for his girls. This is further highlighted in the way he recalled Yelena’s favorite song and his confession attempts to Natasha. Even if his family was assigned to him, it was more than a job.

Related: What Martial Arts Does Black Widow Use? His fighting style explained

Further proof of Alexei’s love for his family is Melina’s tattoo. On his collarbone, Alexei has a tattoo of a young woman with a short haircut. The word “love” (written in Cyrillic) below the photo reveals that Alexei missed his fake wife enough during his incarceration that he got a tattoo of a young version of her, right above his heart, to keep Melina close. of him until ‘We would be together again.

Looking closely at Alexei’s eagle tattoo, there is a notable addition, one that Harbor said. Variety was added to reduce the similarity to the Nazi eagle. The tower parapets are used to represent the amount of time the user has spent in prison; the more domes the cathedral has, the longer they have spent in prison. With decades of incarceration under his belt, Alexei’s cathedral tattoo is quite intricate.

One of Alexei’s simplest tattoos is the pair of eyes that can be found on his chest. The eyes are another common Russian prison tattoo, meaning the wearer is “watching you.“While it usually implies that the wearer is taking care of his fellow inmates, it is possible that it is another tattoo dedicated to his false family, a promise to always keep an eye on them. It is clear that Alexei still followed the careers of his girls from prison, since was excited about Yelena’s success as an assassin and Natasha’s career as Black Widow with the Avengers.

Many of Alexei’s tattoos are common among prisoners. A cobweb tattoo on the elbow is a traditional symbol of someone who has been in prison. It is often used to represent feeling trapped or entangled in the prison system. While he has a complicated history with white supremacist groups, there is no evidence that Alexei belonged to any of these groups during his time in prison. Many Russian prison tattoos are used to indicate the user’s criminal classification. The eight-pointed stars found on Alexei’s shoulders are used to denote his status as a high-ranking criminal. The silhouette of a bird on his left arm may be indicative of a yearning for freedom, while the scorpion on his right shoulder tells other prisoners that he is not someone to mess with.

If there is one thing Alexei loves as much as his country and his family, it is himself. His glory days as the Red Guardian are what helped him get through his decades in prison, and upon escaping, one of his first wishes was to put on his old uniform again. When one of his fellow inmates told his story about fighting Captain America was a lie, Alexei broke his wrist. So it’s no wonder Alexei has a tattoo of the Red Guardian and his own name. The Red Guardian tattoo is a large piece that takes up the entirety of his back and is the tattoo he received during his wrestling scene.

Next: How Black Widow Changes The Way You See Infinity War And Endgame

Why James Gunn Chose Suicide Squad Over A Superman Movie