Lava reaches banana plantations: it burns plastic from greenhouses and fertilizers and creates a toxic cloud 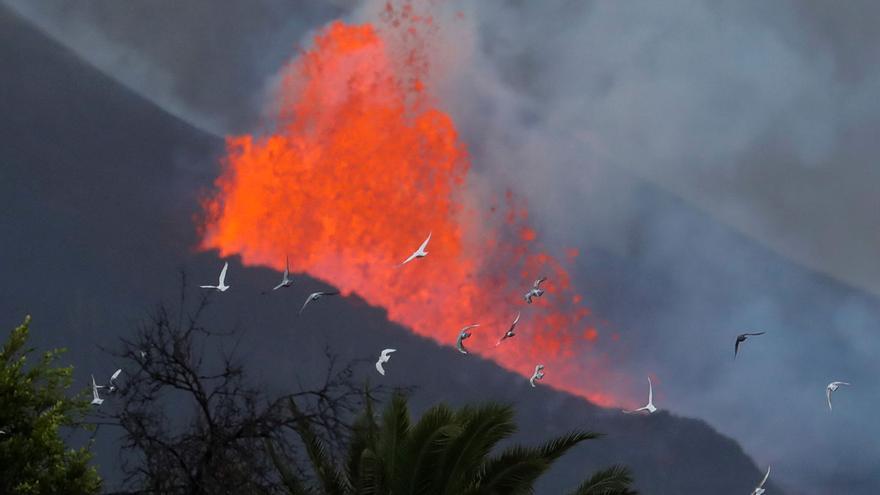 The lava from the La Palma volcano, which slowly advances towards the sea, has entered in the area of ​​banana trees and has burned plastics from greenhouses and fertilizers. Thus, as a consequence, a toxic cloud, already diluted, was created this Tuesday afternoon, which has caused neither harm nor danger to people, since it has remained within the exclusion zone.

Anyway, the concern about the direction of the wind and the one that the ash cloud takes in the next few hours is increasing, since it could end affecting air traffic in La Palma, La Gomera and the west of Tenerife, the director of the National Geographic Institute (IGN) in the Canary Islands, María José Blanco, has warned.

An impediment to flying

Thus, the lava of the last hours that the volcano has thrown since it reactivated on Monday afternoon has followed the previous flows, although it had a significant widening, and still it is unknown if it will reach the sea and, if so, when will it occur. The wash has crossed the center of Todoque and has been located in El Pampillo, at a distance of approximately 2 kilometers from the coast, not in a straight line, but following the path of the prediction models that point to the area where it could end up falling to the sea.

The technical director of the Canary Islands Emergency Plan (Pevolca), Miguel Ángel Morcuende, has reported that the toxic cloud that emanated from the banana plantations, in which there was ammonia and boron trichloride, among other components that have been analyzed by The Military Emergency Unit (UME), forced to evacuate the people who were in the vicinity who had been authorized to remove belongings and perishable products.

Morcuende has indicated that the episode recorded with “the small” toxic cloud can be repeated due to the material that can burn the lava, but has insisted that it will not be affected beyond the exclusion zone.

María José Blanco explained that, after a phase of practically inactivity that lasted more than ten hours, the volcano began to emit abundant lava this Monday afternoon from a “spillway” on the north flank of the emitting center that moved fast above previous casts, also thanks to its greater fluidity.

It is through this “leak” that the lava is flowing, although there is still strombolian activity in the main crater. Thus, at this time, the Hawaiian or effusive phase predominates, in which the volcano only emits lava, in a context in which, Blanco stressed, it is normal for periods of increase and decrease in eruptive activity to alternate. He has also warned that explosions can occur again abrupt.

The director of the IGN in the Canary Islands has indicated that the estimated volume, through thermographic measurements, of the cone generated so far is 10 million cubic meters and that its morphology continues to change constantly, with successive growth and reconfiguration processes.

Regarding the seismicity registered in the last hours, it has been located at a depth of about 10 kilometers in the Fuencaliente environment, in addition to some superficial ones in the vicinity of the cone. Likewise, the deformations of the soil continue to stabilize in the horizontal components and there has been a decrease in the vertical. The sulfur dioxide emission rate registered on Monday “a marked decrease”, around 567 tons per day.

The technical director of Pevolca, Miguel Ángel Morcuende, has indicated that the number of constructions affected by lava amounts to 585, plus another 97 in danger. Also, it has advanced that this afternoon a count will be carried out and it is probable that this figure has experienced “a significant advance”, since the laundry has had “a widening” in the last hours.