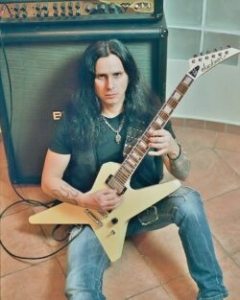 Gus G is the guitarist for the Greek power metal band Firewind. Gus has also performed with Kamelot, Arch Enemy, and Ozzy Osbourne. Gus’ latest release is a solo instrumental album titled “Quantum Leap”. Media Mikes recently had the opportunity to speak with Gus about the creation of the album and his progression as a guitarist.

Adam Lawton: Can you give us some background on the creation of “Quantum Leap”?

Gus G: This is my first fully instrumental album. I had the idea of ​​making an album like this in the back of my mind for a while, but I never decided to do it until now. With all the locks, I knew I’d be staying home for a while. I was doing press for the latest Firewind album and we were getting ready to start touring and then everything got canceled. Between all those interviews, I started to write different thoughts and ideas. Before I knew it, I had seven or eight new ideas. This was around spring and I knew it would still be a while until we could do live shows. I thought now was the time to make a solo album on my own. My plan was to have no external collaboration. I spent all of last summer working on this album.

ALABAMA: Did the effects of the pandemic help shape this material in any way?

GG: Could be! I think it had a lot to do with it. For me, when you make albums it’s like a snapshot of the moment you’re in. The material reflects my psychology and where I was during this time. Like everyone who is dealing with this, I had many ups and downs where some days I had a lot of energy while others had none. This is not your typical metal album as there are so many different styles and vibes.

ALABAMA: Do you have a different approach to working on an instrumental record compared to one with vocals?

See also  Sonic 2: 10 Lessons You Can Learn From The Worst Game Movie Sequels

GG: It is a different process. Making music without voice in general is a completely different process because you have to fill that void. He really wasn’t used to that. It was an interesting learning experience. I had done instrumental music in the past, but I never really delved into that. With this I wanted to find a balance. I wasn’t interested in making a shredded album because I wanted to make an album that had great songs with great music. I wanted there to be a musical statement rather than just a collection of guitar licks and riffs.

ALABAMA: Did you build the songs around vocal melodies or did you add those passages later?

GG: It usually starts with riffs. This part of the process was the same for me as when writing for Firewind, as it all starts with the riffs. The big difference was where to go after the initial riff started. You could go anywhere, be it a melody or a certain key change. Those are the things that I had to discover and build from scratch. At the end of the day, it was all about balance, as well as hooks and tunes. At the time, I didn’t really have any vocal ideas, but now, looking back, maybe I did have ideas about great parts of vocal melodies that would grab the listener.

ALABAMA: How was your production and editing process if you were only working on the album? GG: That’s one of those things where how do you really know when to do something? A track is ready when you’ve listened to it enough times and are satisfied with it and send it out for mixing. There were some tracks that went through a lot of rewrites and edits. When you write something, you have the feeling that it is already done. However, this can be a double-edged sword because you can always think it could be better. I try to keep a little distance with the music that I do. When I think something is finished, I won’t listen to it for a few days and then come back with fresh ears. That’s when, if necessary, I will make changes. Really everything is a feeling.

ALABAMA: Was it all freshly written material or did you have some of the material before deciding to make the album?

GG: Are both. I always have riffs out there. I keep a file of different ideas. Some things that I did not use for other projects and others are the ones that occurred to me at the time without a specific place for them in mind. I never know what these will be used for, but I go back and listen to them for ideas. Sometimes it’s weeks or months later when I go back, but that folder is usually a good starting point. You could use things as is or start completely from scratch.

ALABAMA: How do you decide what material to keep for yourself and what to use for other projects?

GG: Sometimes it is difficult to do that. It’s all my writing and my style. There are times when I set out to write something specifically for Firewind or my solo material and in the process that material goes in the opposite direction and ends up in something it was originally intended for. Firewind has a certain sound and style, so you’re less likely to experiment with that stuff, but like I said, things have a way of finding their way into places they weren’t originally designed for.

ALABAMA: He worked on his own and provided all the instrumentation for this album. Is this how you prefer to work or do you prefer the more traditional route of recording with other musicians?

GG: I’ve always done things on my own for the most part. Firewind actually started out as a file-sharing band in the early 2000s. I’ve gotten really used to putting together a full, good-sounding demo which was a pretty natural process for me when it came time to record the parts of ” Quantum Leap ”.

GG: I think I’m somewhere in the middle. I think the last few years I have not practiced as much as I would have liked. When I go into practice mode, I really get into it. I try to learn or develop new techniques and lick. Then there are times when I don’t play guitar as much. I don’t allow myself to be careless, so I’m on top of things, but I’m not putting in ten-hour practice days like I did as a teenager.

ALABAMA: Now that “Quantum Leap” is out, have you started thinking about your next project or are you giving yourself some breathing room?

GG: I did a side project with Rob Chapman from Chapman Guitars and Youtube. It’s called “Criterium” and we did a three song EP. We are not sure when it will come out, but we have been recording and Rob is preparing to do the vocals very soon. I’ve known Rob since 2006 or 2007 so it’s been great working with him on music after being friends for so long.