Keys not to miss ‘Tres’, the most original Spanish film of the year 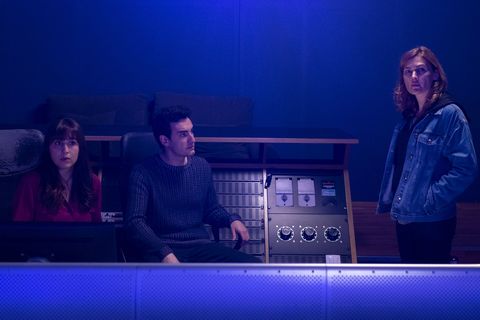 It hits theaters’Three‘, the movie of Juanjo Gimenez with Marta Nieto as a protagonist who has been receiving praise in all the international festivals in which it has been screened. After its world premiere at Giornate degli Autori at the Venice Film Festival, and passing through the Toronto International Film Festival, it reached the Official Section of the Sitges Festival where its seasoned audience also applauded one of the most original Spanish bets of the year.

We review the keys that have made ‘Three‘to one of those titles that can become a word of mouth hit as soon as it reaches your viewers.

The strength of the premise

A stressed-out sound designer is out of sync. The images reach his brain live but the latency with which he hears makes it impossible for him to work and live as he did before. Able to hear what has happened in a place minutes after it happened, even if she was not present.

This great plot excuse could become a wasted “high concept“In less expert hands, but the script by Juanjo Gimenez and Pedro Altimira does not allow it, orchestrating around his fabulous Macguffin a film dedicated not only to exploring the impact of this event on its protagonist, but also to delighting the viewer with the properties of the event with which they play in form and substance.

With science fiction at the ready, ‘Three‘opens the door to the plot of personal discovery of the protagonist in which, without abandoning her premise, we learn about the uncomfortable relationship she maintains with her ex-partner, with her mother and with her co-workers. Literally and figuratively out of sync with itself, the incomprehensible event it passes through never becomes an excuse to ensure that a melodrama can participate in the grids of festivals that boast of fantastic fiction, but remains in the foreground to defend, definitely, a genre movie.

Director Juanjo Gimenez, together with his essential co-writer Pedro Altimira, have in their filmography an essential gallery of shorts among which are ‘Maximum penalty‘(2005),’Nitbus‘(2007),’Knee‘(2009),’Ascent‘(2020) and, of course,’Time code‘(2016) the title that made them Oscar nominees.

Winner of the Palm d’Or in Cannes and the European Film Award for best short film, ‘Time code‘was one of the five selected by the North American academy in 2017 with a story that, as in’Three‘, did not leave aside its science fiction component at any time. Getting academics to value a genre story is an achievement in itself.

One of those actresses who manages to seem the only possibility to embody each of her characters, Marta Nieto it is already an essential part of our fiction. Winner of the Best Actress Award in Horizonti at the Venice Film Festival, the Forqué Award and nominated for the 2020 European Film Awards for her role in ‘Mother‘, from Rodrigo Sorogoyen, has also triumphed on the small screen with his work in ‘Karabudjan‘,’Blind to appointments‘,’Tell me how it happened‘ and ‘Shame‘.

We will see her soon in the Italian ‘Leave a day in Rome‘(Edoardo Leo) and in the series’Fair: The Darkest Light‘.

admin
See also  Escape Room 2: Where Have You Seen The Cast Before