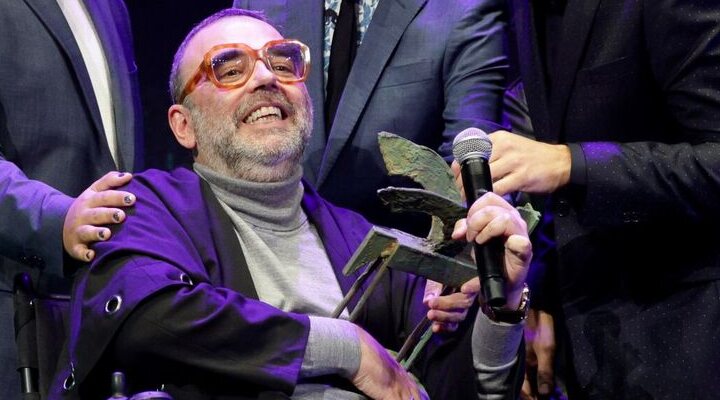 This week Movistar + is facing criticism for alleged far-right censorship of its non-fiction content. It all came from a video on the comedian Facu Díaz’s Twitch channel, but he has been joined by several people who have worked for the network for years, including Bob Pop.

The commentator, television critic and creator of the series ‘Fagot lost’ took advantage of the moment in which he picked up the Ondas for the best comedy series (ex aequo with ‘Vamos Juan’) to launch a taunt at Movistar +. “One night in my section of ‘Late Motiv’ by Andreu Buenafuente, I told a story from my adolescence of the ‘chungos’ who ‘nagged’ me in town for being a fag, fat man and glasses”, commented on what was the origin of his series, since the executives of TNT called him to turn his life into a fiction when he saw that speech.

Then he went on to send a greeting to his colleagues from ‘Late Motiv’, a program that will end its run on the network in December.“Movistar + kicked me out before them because it was uncomfortable for them”, concludes Pop.

A fan, a friend, a slave, a servant of Bob Pop for things like THIS: pic.twitter.com/gCyHV3r5Rq

His message joins a stream of complaints launched on social networks by people who have worked in various programs of the chain, such as Héctor de Miguel (alias Quequé), the presenter of ‘LocoMundo’. He and the comedian Kike García have assured that Movistar + threw back certain jokes related to VOX, both confirming the veracity of a thread from El Mundo Today, satirical medium of which García is co-founder. In the thread you can read several false headlines that mentioned the far-right party.

As it is. Negotiating the script for ‘Locomundo’ with Movistar every week was exhausting. https://t.co/WYAoWUTDaX

Javier Durán, deputy director of ‘Late Motiv’, has also suggested that such censorship in favor of the far-right party exists.

Hi, I’m Javier Durán.
I have been deputy director of ‘Late Motiv’ for 2 seasons and I want to publicly ratify the statements of my colleagues Facu Díaz and Bob Pop; and give all my support to the professionals who still suffer from the extreme right-wing censorship of@MovistarPlus pic.twitter.com/CNJk1D0rU6

The first to pull the blanket was Facu Díaz on his Twitch channel. The comedian denounced a few days ago “situation that Movistar + has been experiencing for some time in this part that has to do with fear of the extreme right, servility towards the extreme right and the presence of people [sic] within the company that respond to the extreme right“.

Very serious what Facu Díaz denounces about the censorship of jokes only from the extreme right in Movistar programs. pic.twitter.com/d8wSuCP4BV

“The only time that Movistar + has deleted and apologized, and has removed a piece from a television program for political complaints, has been because VOX complained about content from ‘La Resistencia’. The only ones who pick up the phone to call Movistar + to ask for things to be deleted are the friends of VOX“added the comedian.

Díaz refers to a monologue by Iggy Rubín in which he made jokes related to José Antonio Ortega Lara, co-founder of the far-right party. The David Broncano segment of the show was eliminated in 2019. It is worth asking, going back to what concerns us, if the chain has ever applied these practices with its fictional products.