Álex Pina on a spin-off of ‘La casa de papel’: “We are thinking about it” 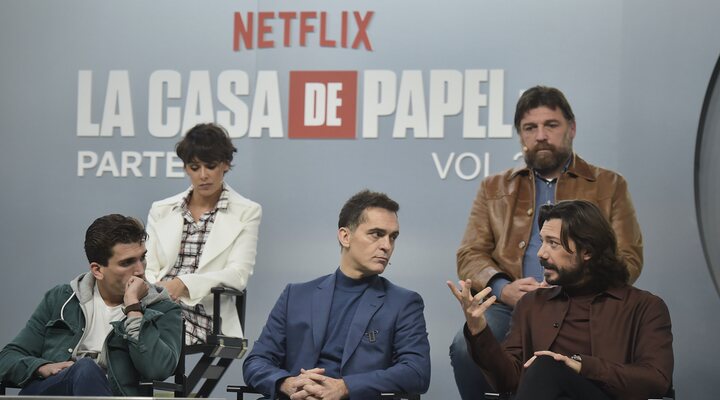 Netflix has chosen Madrid’s Palacio Vistalegre to say goodbye in style to its most successful Spanish series to date. ‘La casa de papel’ finally premieres its last five episodes this Friday, December 3, and the team behind the most notorious (and longest) heist of the century has come together to convey a final word to the press.

“It was exactly 5 years ago that we were writing the pilot for ‘La casa de papel'”, remembered the creator Álex Pina. “In these five years he has become a monster that we have a lot of affection for”. At his side, his partner and co-creator Esther Martínez Lobato added: “We are ending a very long and bizarre journey. We had that debit of finishing the characters’ stories well and giving their emotions a lot of ground, and emotionally the writers needed to close this journey with a lot of feeling”.

On what we can expect from this Volume 2 of Part 5, Martínez Lobato advanced that fans should be attentive to the hunt for small tributes to the tour of ‘La casa de papel’: “There are many nods to the internal narrative of the series, situations that are repeated and tessitura in which many characters enter that remember how they began”. “Many sequences that I like from the series are in this block”, Pina thought. “We took the Professor out on the street, he has a lot of adrenaline and a lot of twists but it works very well in the sentimentality”.

Jesús Colmenar, director and executive producer, also warned of a change in tone with respect to Volume 1, loaded with action: “In the first part we handled the epic of the warlike tone and in this second part we handle another type of epic, the personal epic of characters reaching their climax“.

They have also promised twists until the last moment and a very busy last episode. “This last season they have pushed to the maximum so that the situations that you have to solve are the most extreme possible”, contributed Álvaro Morte, who has played The Professor during the 5 parts. According to the screenwriter, “When they get to the last chapter people are going to say: ‘But how are they going to get out of this?’. “Until the last minute of ‘La casa de papel’ you do not finish closing the trip and understanding what the series has been”added the director.

And then? Much is being said about the possibility that the series has some kind of continuation on Netflix in the form of a prequel or spin-off (in addition to the South Korean remake that is being prepared). Without giving any specific information, Álex Pina does not close the door: “Regarding whether we are going to have something else after ‘the house’ or inspired by ‘the house’, it is something we are thinking about, but right now it is in the air or thinking about it”. Of course, Colmenar emphasizes: “The end of ‘La casa de papel’ is the end of ‘La casa de papel'”.

For now we are left with the last sensations of the cast. Úrsula Corberó has admitted that Tokyo’s death at the end of Volume 1 left her “shattered. To this day I have overcome it but not completely. “To make it clear that her departure from the series was final, the actress has assured that she has not read the scripts for these latest episodes. “They even gave me the chapters and I haven’t seen them because I really wanted to see this ending as a spectator and fan of ‘La casa de papel'”. “I don’t know what the ending is like, I know some brushstrokes”, he promised.

Álvaro Morte has summarized what will remain in his memory after these years of revolutionary project: “Beyond the phenomenon, I am left with that field work that has been filming every day, with some colleagues, with some wonderful texts that are very difficult to pick up., that we have been able to take them to a site and everyone liked it. How nice it has been to work with a brutal cast and crew. “. Others have not enjoyed the experience 100%, such as Enrique Arce, who plays the hated Arturo Román, who said with a laugh: “I’m not going to miss all the slaps that I get on the Internet.”

An uphill battle to change television

In addition, Colmenar and Pina have spoken excitedly about what the success of ‘La casa de papel’ has meant not only for their careers but also for the Spanish industry in general. “We have been fighting for many years within the television industry, trying to break down barriers such as good-naturedness, generalism or the« lady from Cuenca », who were our great enemies”, the director explained. “It has been an arduous battle for many years. For me ‘The paper house’ has been the climax of that battle. We wanted to make a more cinematographic television fiction that could be global, that could be exportable”. They have clearly ended up succeeding. “I remember shooting a sequence from the last chapter and having the feeling that we were still looking for a new language. We have never stopped in that aspect”.

For Pina, this phenomenon “has placed the industry [española] in a place that we did not dare to think. We have always been a very complex country in that sense. We always said “is that she is a Spaniard”; suddenly we have succeeded in making the very local stick with the larger and we win them in many cases “.

See also  Fuel theft not only affects the economy but the integrity of people: Julio Menchaca | find out