‘La casa de papel’ is a love series. It is not action or drama or violence, as Netflix says. It is, above all things, a romantic fiction. He appeared in 2017 on Atresmedia and moved to a wealthy Netflix in the third season. There, everyone thought that the road was beginning again. That the special effects would bring more fidelity, that the images with drones and expensive cameras would put the series in the spotlight. They thought that with the platform all the international success would come. And wine. The series grew, got older. It stopped being a national format of more than an hour that we had a hard time watching on TV because it ended very late during the week, to being a bit of forty or fifty minutes to watch anywhere and at any time. In any country in the world. But ‘La casa de papel’ triumphed because it is a series of love.

Of love between a rebellious girl and a quiet and reserved boy. Between a heart attack secretary and a neighborhood kinki. Between a weird genius and an unfortunately vulnerable woman. Between two men who have been friends all their lives. Impromptu love, love in the middle of a robbery, or love in regards. They said with ‘Game of Thrones’ that the series had such an impact because so many characters appeared, so many plots, that it was impossible for the viewer not to feel identified with at least one of them. The same thing happens here on a not much smaller scale. There are many, the possibilities grow. You can be Tokyo when you go crazy, Denver when everything does not matter to you or The Professor when you need sanity. You can be everyone and you can fall in love just like everyone else.

Úrsula Corberó’s character says it several times throughout the series in her role as narrator. That love is the engine that moves everything. It was love that made the ex-Berlin woman aware of the plan to rob the Bank of Spain. It was love that made Berlin take the step to rob the National Mint and Stamp. It was love that moved Tokyo to beg to enter the second hit. Love what made Lisbon enter the bank. Also that Stockholm changed sides. Or shoot Arturito. It is love also that drives all of The Professor’s decisions. The love for his father, the love for the family tradition.

But beyond that, perhaps there is an idea that weighs much more: romanticism. It is the same, but it is not. Romanticism as a synonym of optimism, possibilities, wanting to do things and being certain that they will turn out well. Berlin is a romantic, The Professor is a romantic. Everyone is infected with that romanticism. Of that collective madness that turns out to be the last halo of genuineness and hope in the world. That is also why ‘La casa de papel’ is so big. Because when everything seems to be over, it starts again. Because they kill them, but they fight again. Because their bodies appear coming out of the Bank of Spain and suddenly the zippers of the bags open. Because this series has illusion, it has Faith, it has the iron optimism of childhood. He has love. 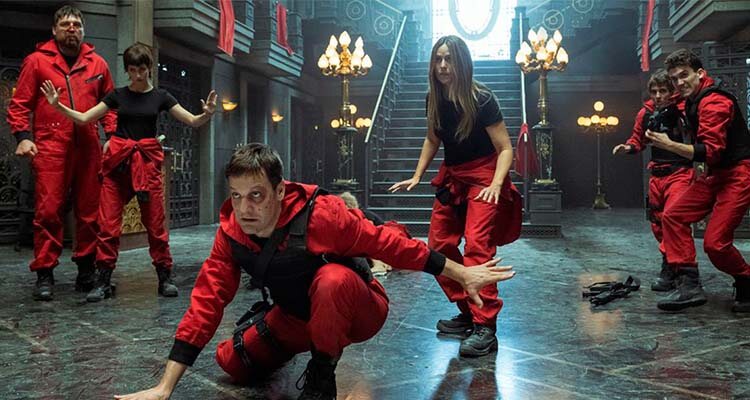 Perhaps an ending in which the band did not come out unscathed would have been a success. Maybe, for once, we could run away from the happy ending. But for what? why? There is romanticism in tragedy, but there is no optimism. There is no love. Ending badly would have meant ending what the creators have been building for four years. The band didn’t have to lose. The band had to keep their Faith so that we could all continue to have it. In the premiere of this volume II of the fifth season, Úrsula Corberó He said he had survived ‘La casa de papel’. Even that is romantic.

Survive, believe, hope, be optimistic, love. It is not an action series, it does not triumph by greatness or investment. That’s just the wrapping that dresses it all up to make it look and stand out. ‘La casa de papel’ is a love series. The final part is the climax. Come and survive because this is the kiss of goodbye.