The end of ‘The Walking Dead: World Beyond’ comes with a major reveal 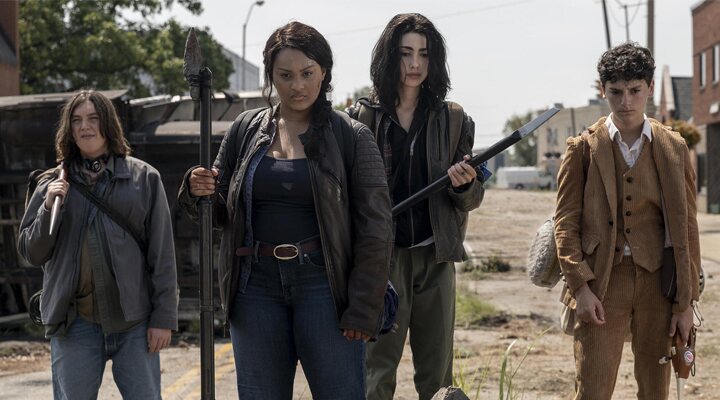 * This article contains spoilers for the last episode of the second season of ‘The Walking Dead: World Beyond’

Yesterday at AMC Spain the end of the second and final season of ‘The Walking Dead: World Beyond’ premiered. The series of the zombie franchise has ended and its creators, Scott M. Gimple and Matt Negrete have talked about one of the scenes in which the origin of the invasion of the “walkers” could have been discovered.

The series is about the first generation to have lived solely under the threat of the undead, after the apocalypse. In the final chapter Elton (Nicolas Cantu), Silas (Hal Crumpston), Hope (Alexa Mansour) and Iris (Aliyah Royale) appear for the last time (that we know of. In a scene in the middle of the end credits we are shown an abandoned French laboratory, which had already been named in the first season. Dr. Jenner (Noah Emmerich) talked about what happened there in his videos. A graffiti was also seen on the wall that said in French “the dead were born here.” What does this mean? Does it have to do with the origin of the invasion?

In an interview for Weekly Entertainment, Gimple and Negrete did not clarify if that was really the origin, although they assured that they were dying to explain it. However, Gimple gave a hint: “I think it’s a very good story for me to tell now, so I won’t.. But what I would say is that you do not believe everything you see on the screen. It may be real, but don’t think it’s true just because it appears “.

He also spoke about the future of the franchise: “It is a great world and there are many things going on in it. And these are people who are part of that world, but they are not running the world, although Elizabeth certainly came close. But you see Jadis rising to a position of power. You see Elizabeth leaving that position of power. And then everyone in their own way trying to affect the world, but they’re not running the world. The people from ‘Fear The Walking Dead’ and the people from ‘The Walking Dead’ are on the same page. There are great things going on around you, and it’s true that most of it is the apocalypse, but they’re not necessarily running the apocalypse. It’s kind of a line with that way of thinking. This is all a very, very big story and each of these people, each of these characters are little pieces of that story. But the story continues, and we hope it continues. “.

See also  The Batman goes viral for this hidden message