Topic, the streaming service of First Look Media, has acquired the rights to the documentary “The Jump”, a film about a Lithuanian defector during the Cold War who jumped onto an American ship to escape the Soviet Union. learned exclusively.

Topic acquired the US and Canadian TVOD rights to the film from Giedrė Žickytė, and Topic plans to release “The Jump” on March 1, 2022 in a broader platform launch followed by its debut on Topic in the summer. of 2022.

“The Jump” recapitulates the story of one of the greatest political troubles of the Cold War. On Thanksgiving Day in 1970, a Lithuanian sailor named Simas Kudirka defected from the Soviet Union by jumping from a Soviet ship and aboard a United States Coast Guard cutter ship, requesting asylum and pleading for his freedom. His fate on whether he should be returned to the Soviets was the subject of much debate.

Not only does the movie include incredible photos of the jump itself, but it even features a conversation with Kudirka himself recreating his experience and what he remembers from that day. Henry Kissinger is also among those featured in the documentary, as he discusses why this was a “special case” and a trailer for “The Jump” shows that President Nixon is also asked about the Lithuanian defector.

“Simas Kudirka is the type of risk taker that our viewers will immediately love,” Topic CEO Ryan Chanatry said in a statement. “Her story, beautifully told by Giedre, is a compelling reflection on the sacrifices we make to improve our lives and the hold our historical roots have over us.” 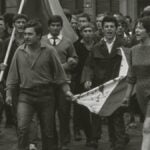