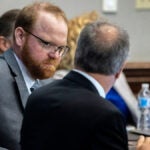 The three white men convicted of the murder of Georgia black runner Ahmaud Arbery were sentenced to life in prison on Friday after they were found guilty in November.

Travis McMichael, 35, and Gregory McMichael, 66, confronted Arbery as he ran through their neighborhood in February 2020. Superior Court Judge Timothy Walmsley handed down the sentences Friday and said neither Travis, who pressed the trigger, nor will his father Gregory be eligible. for parole. His neighbor, William “Roddie” Bryan Jr., 52, will be eligible for parole after serving 30 years in prison.

The three men were found guilty in November after the jury deliberated for two days.

Notably, the McMichaels were also charged with three separate federal hate crime counts. The federal trial is scheduled for February and they could face additional penalties if convicted of those charges, which include interference with rights, attempted kidnapping, and use, carrying, brandishing, and firing a firearm during and in connection with a crime of violence.

Bryan was acquitted in November of the murder charge, but like the McMichaels, he was also charged with federal hate crimes, including interference with rights and attempted kidnapping. He pleaded not guilty to those charges. Again, if you are found guilty, you may face additional penalties.

Arbery was shot and killed on February 23, 2020, while jogging in the Satilla Shores neighborhood of Brunswick, Georgia. A white father and son, the McMichaels, began following Arbery in his truck before the son, Travis, shot Arbery three times and killed him. The incident was videotaped by Bryan, who was also following Arbery in another vehicle.

It wasn’t until May of last year, three months after Arbery’s death, that the McMichaels Y Ryan they were arrested and charged with murder.