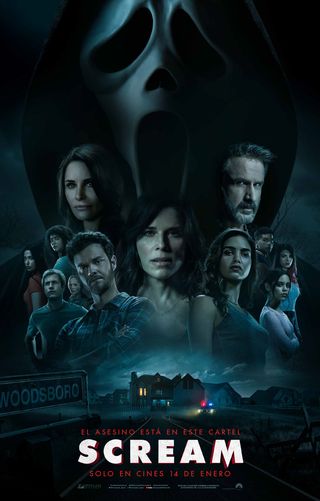 The best: return to vindicate the masters of giallo in their murder scenes.

The worst: his unnecessary efforts so that we do not guess (yes) the final surprise.

In its brilliant beginning, this fifth installment of the meta-referential saga devised by Kevin Williamson and put into images by an inspired Wes Craven puts all his cards on the table, stabbing them with a sharp dagger. In times where the “high terror” has been behaving like a relentless killer under the mask of transcendence and giving everything a plus of whatever it is as long as it ends with the suffix -ism, that the first potential victim of Ghostface make his proud ignorance of the genre and his devotion to Hereditary The babadook his only defense is as hilarious as it is terrifying. Scream It takes place in the metalinguistic territory that its creators feared the most: that of a mass of alleged fans who destroy, stab and rebuild “inconsequential” horror films at will from the anonymity of the Internet. A place where you look down on everything that in the original was told with irony and respect, because cinephilia kills, and even more so in the collective Woodsboro of the teenage slasher. In a malicious exercise of justice, every time the characters in the film insist on turning Ghostface into TikTok meat or reducing him to a viral star of a YouTube channel, Scream it returns its mythical category of icon. Every time there is talk of quick images and quick deaths that are a Gif to be consumed and replaced by another, the film takes its giallo time (the sequence in the kitchen, a small wonder of tension and patience) in planning each murder in cinematographic format, as if the thing really were between what (genre) cinema is and what some insist on making (genre) cinema be.

The new one Scream born from the conversion of the same franchise Scream in a more or less vintage meme and iconography for Halloween t-shirts and masks. It is born, in the fiction of the feature film directed by the astute Matt Bettinelli-Olpin and Tyler Gillett (Wedding night), of the legacy of the aftermath of Stab, the film within the film in the tetralogy directed by Wes Craven. Craven has already reflected on the invisible lines between audiovisual creation and its content in Wes Craven’s new nightmare. The current Ghostface arises as that fictional Freddy Krueger arose in a reality that was still a fiction. Even the appearance of the original trio of Neve Campbell, Courteney Cox and David Arquette is identical to that of Andrew Garfield and Tobey Maguire in Spider-Man: No Way Home: an arrival in an unknown multiverse where they feel out of place and where they do not understand what the hell Jamie Lee Curtis is doing participating in more titles of Hallowe’en (the ultimate gag).

It is true that fun prevails at all times (the death of cretins is the maximum expression of the term) in Scream with very neoslasher modes that have been becoming something similar to neoclassical in staging and visual look, and with a strange lightness in the mystery game that it proposes, which is nonetheless identical to that of the cinephile charades that Stephen Sondheim and Anthony Perkins wrote for that ten blacks of the Hollywood/Broadway gossip as cult as it is Sheila’s End (Herbert Ross, 1973), but designed by patients with selfies and likes. Almost closing the circle, the feature film has not been shown to the press in Spain, but a preview was organized with it only for influencers that, beyond the evil homicidal thoughts that can assail one, sums up perfectly what is Scream: the fictional monster played by an actor in a criminal reality that is still fiction looking in the mirror (social networks) and seeing his end as close and inevitable as that of Byron Orlok/Boris Karloff in The hero is on the loose by Peter Bogdanovich. But with enough time to take down the villain (and his followers). Ghostface is dead? Long live Ghostface!