‘The Cuphead Show’ (Netflix): The first trailer is promising 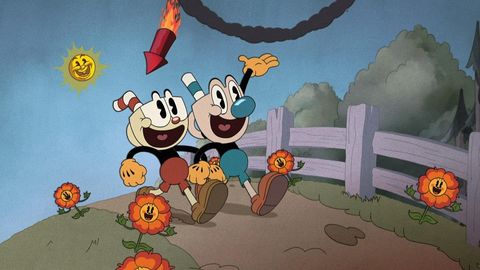 If you were anything like me, I can clearly guess what happens to you when you read the word ‘Cuphead’. First of all, the cold sweats. Then, the memory of those long games of losing and dying over and over (and over) again, always “nearly”. Finally, the “nice” winks of a game that, due to its aesthetics, cartoonish it looked fun, but after twenty deaths in the orchard of a happy carrot it ceased to be so and took on the character of a true epic fight against yourself. It’s okay? Yeah man. Like so many, I left the game of Jared Moldenhauer and Studio MDHR after a few hours and, like so many, I regretted not being able to enjoy the well-cared world of Inkwell Isles until the end.

Therefore, if you have been a little up to date with the current series, you will have accumulated desire for the series that Netflix Animation announced that it was preparing with the original team of the game. This is the official synopsis: “‘The Cuphead Show’ is a comedy series based on the unique misadventures of the lovable and impulsive Cuphead and his cautious but easily influenced brother Mugman. The two will travel the world of the Inkwell Islands in search of fun and adventure, always watching each other’s backs… Until there is only one cookie left, in which case, each of them must take care of their own. own cup.

From what we know of the original, the endearing brothers are going to meet an archenemy of care: the Devil, who will challenge them to “play” with him. Any thinking head would refuse, but… What happens when instead of a head you have porcelain? Says the iconic song of Kristopher Maddigan that opened the game: “Cuphead and his friend Mugman liked to roll the dice. One day by chance they got involved playing with the Devil and, God, they paid for it.”

From what we saw in the trailer that Netflix released on June 11, the malevolent King Dice (whom he voices Wayne Brady) will have a relevant role in the story… In addition, in the trailer that was released today, we see the appearance of Elder Kettle, that damned carrot, the mafia frogs, the pig in the store and a lot of other iconic characters. All with a special cameo from the dancing skeletons of the ‘Silly Symphonies’. Retro animation, charismatic characters and a story that wants us to see the series like someone who gets on a circus attraction.

up the ante C. J. Kettler, along with the creators of the original ‘Cuphead’, Chad Y Jared Moldenhauer. exercise of showrunners for the MDHR animation studio. Also, in the credits of the series, we see that after the brushes there will be the award-winning david wasson (‘Mickey Mouse Shorts’), one of the best contemporary animators.

‘The Cuphead Show’ release date is February 18 and the playable sequel to ‘Cuphead’, ‘Cuphead: The Delicious Last Course’ will be released on June 30, 2022.