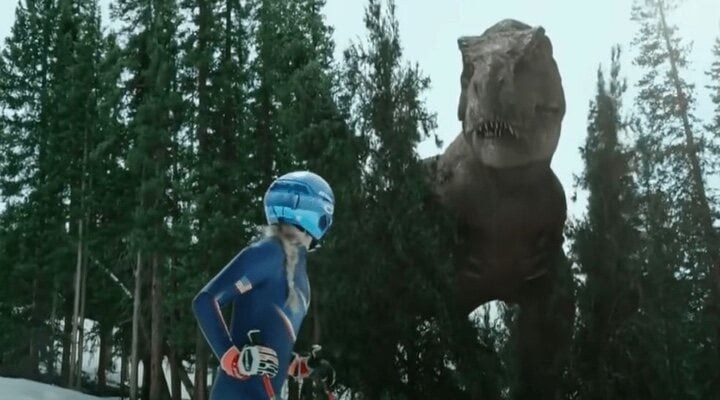 The Winter Olympics will start in Beijing on February 4. Taking advantage of this, the ‘Jurassic World: Dominion’ team, along with NCB and Peacock, They have launched an original television commercial in which the dinosaurs burst into the middle of one of the tests.

In the video, we see a skier who is part of the American delegation. While calmly descending a mountain, she realizes that she is being chased by none other than a Velociraptor. It could also be an Atrociraptor, the species that introduces the new installment. As if this were not enough, at that moment something appears that scares even the dinosaur: a T-Rex. Although apparently these are not real images of what we will see in the film, it is a good way to remind the public that both the competition and its premiere will arrive this year.

According collider, The idea of ​​bringing these two themes together came about because both the Olympics and the film will be streaming in the United States through Peacock. Of course, in the second case we will have to wait four months after its premiere in theaters.

After several delays, ‘Jurassic World: Dominion’ will hit theaters on June 10. In it, we will have Chris Pratt back as Owen Grady and Bryce Dallas Howard as Claire Dearing, who will hunt these huge reptiles to try to make the human race survive. Joining the cast for the first time is DeWanda Wise, who will co-star in the film alongside Pratt.

In addition, this upcoming film will also see the return of Sam Neill, Laura Dern, and Jeff Goldblum, who all appeared in the original ’90s films. Rounding out the cast are Mamoudou Athie, Daniella Pineda, Jake Johnson, Campbell Scott, Justice Smith, Dichen Lachman and Scott Haze.