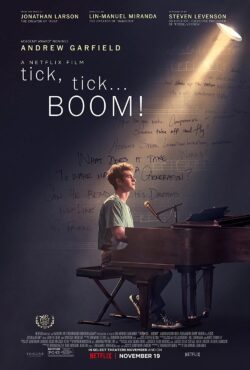 It’s sad when you don’t see your hard work paying off…you don’t see the impact it had on the world around you. One example is Steve Gordon, the writer and director of the movie “Arthur.” He passed away shortly after the film came out and, although he had the opportunity to see how his work was received, he never lived to see “Arthur” become a true classic. Then there is Jonathan Larson.

Larson created one of the most beloved musicals of all time, RENT, which won just about every award possible. Sadly, Larson never got to see how his work was received, passing away the night before RENT had its first public performance. But there was more to Larson’s life, and “tick, tick…BOOM!” gives us a musical look at the man behind the music.

Jonathan Larson (an AMAZING Andrew Garfield), is about to work on the new musical he has written. He’s received rave reviews from everyone who’s heard it, from his friends to the great Stephen Sondheim (Bradley Whitford), but Larson feels he needs one more song for, in the words of the late great Mr. Sondheim: ”

What are you doing after writing two Tony Award-winning musicals, including the brilliant “Hamilton”? If you are Lin-Manuel Miranda, you make your feature directorial debut with a musical about one of your peers. Miranda is a true genius and I can’t think of another modern director who can bring all of his knowledge of musical theater and translate it to the big screen. I say modern because this movie would have lived up to Bob Fosse. The musical numbers are brilliantly staged, while the quieter moments are framed to convey the most powerful emotions. 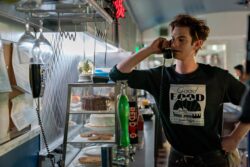 Miranda is aided by an A-list cast, including the aforementioned Mr. Garfield, who, in addition to being one of the best young actors working today, displays a strong singing voice. The cast is peppered with theatrical talent, including Joel Grey, Judith Light, Judy Kuhn and Roger Bart. I think I even caught Lin-Manuel Miranda as a singing kitchen worker.

As the film progresses, we follow Larson through his daily routine, and aAs he deals with his and his friends’ daily struggles, we begin to see the first sparks of what will one day become RENT.

“West Side Story” has garnered the most attention this year as THE movie musical to watch. And that attention is well deserved. However, as the Jets and Sharks learn, there’s always room for one more. BOOM!