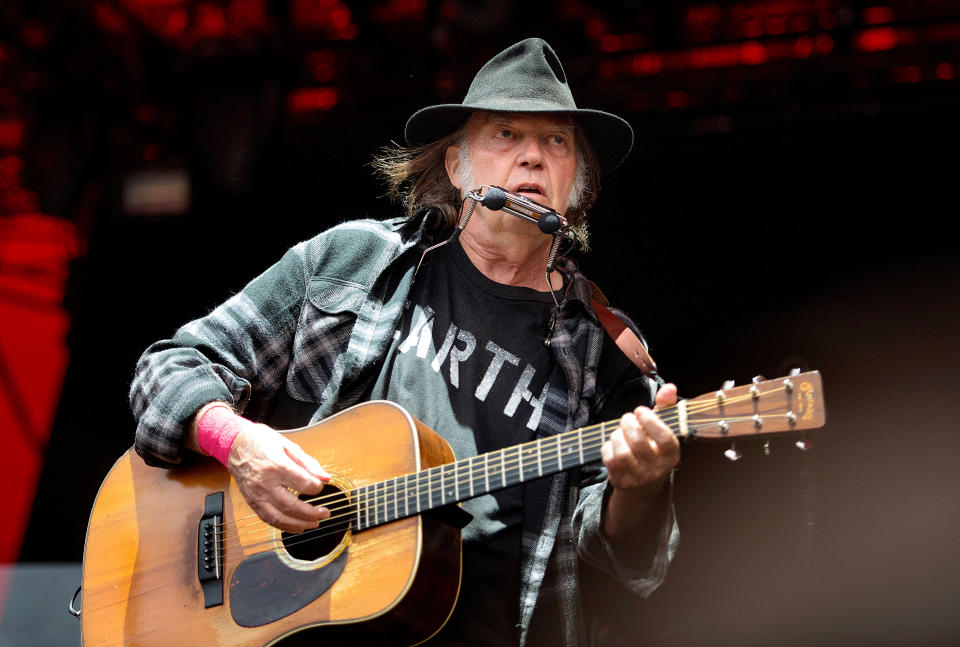 This article was first featured in Yahoo FinanceTech, a weekly newsletter highlighting our original content on the industry. Get it sent directly to your inbox every Wednesday by 4 pm ET. Subscribe

Spotify needs to keep its artists happy, or it will have nothing

Spotify (SPOT), the world’s most popular music streaming service, faces an existential threat in the form of a boycott by the very artists it needs to survive. so far, Neil Young and Joni Mitchell have pulled their catalogs from Spotify’s library, which, let’s be real, isn’t going to put much of a dent into the streaming platform’s subscriber numbers.

While the streaming giant predicts anemic user growth in the first quarter, its fourth quarter financial results beat expectations when they were reported after the market closed on Wednesday.

Tech companies have faced a reckoning in recent years, as regulators and everyday users have called for them to tamp down on hate speech and disinformation on their platforms. But boycotts, like 2020’s Stop Hate for Profit campaign, which pushed advertisers to pull their ads from social media services, have done little real damage.

That’s because companies like Facebook parent Meta (fb), Twitter (TWTR), and Google (GOOG, GOOGLE) that rely on digital advertising generally make their money from small advertisers that can’t afford to ditch their platforms. So even if they lose a big name like P&G, the services will continue to perform well.

Spotify, however, makes the bulk of its revenue from subscription payments. And those subscribers will only stick around if they can stream their favorite artists’ songs. To be sure, the exit of Neil Young and Joni Mitchell alone won’t prompt a mass exodus of subscribers.

As one Neil Young fan who works at Yahoo Finance put it, “I love Spotify more than I love Neil Young.” But Young and Mitchell could be the start of a trend, which would be bad for Spotify.

“I don’t think that Neil Young and Joni Mitchell are going to make a difference,” University of Pennsylvania Wharton School of Business professor Maurice Schweitzer told Yahoo Finance. “But it would make a difference if another 10 artists followed suit and if any of them were really influential artists.”

In other words, if say, Taylor Swift, Beyonce, or BTS pulled their music, Spotify would have to decide between keeping Rogan’s podcast or losing subscribers to rivals like Apple (AAPL) Music.

Spotify purchased the exclusive rights to Rogan’s podcast in 2020 for more than $100 million. Despite his millions of listeners, Rogan has also angered his fair share of people. He previously hosted guests including conspiracy theorist Alex Jones and Gavin McInnes, the founder of the far-right group the Proud Boys.

In recent weeks, he’s stirred up even more controversy. Following his Jan. 25 show, scientists criticized Rogan for not pushing back against his guest Jordan Peterson’s dismissal of climate modeling scientists use to predict climate change.

Neil Young took a particular issue with Rogan bringing on guests who spread disinformation on everything from COVID vaccines to the use of masks. Rogan himself has also been criticized for touting the use of the drug ivermectin to treat his own COVID infection.

See also  The Suicide Squad: James Gunn Has No Time For Your King Shark Squeaks

Despite that controversy, or maybe because of it, Rogan has been a boon to Spotify. “The Joe Rogan Experience” is the platform’s most popular podcast; it draws a loyal audience who land him in the top spot in regions ranging from the US to Finland. And that’s exactly why Spotify was willing to court the comedian.

“They’re so desperate for content. I mean, that’s why they gave Rogan $100 million,” Schweitzer said. “They want content that’s going to attract subscribers.”

Spotify already has a massive library of music. It’s rare to search for an artist and not find them on the platform. But it was lacking when it comes to podcasts. To fill the gap, it went on a spending spree, buying not just the licensing rights to Rogan’s podcast, but spending $230 million on Gimlet and nearly $200 million for Bill Simmons’ The Ringer, as well.

And it’s paid off. In Q3 the company reported having 3.2 million podcasts on its platform. And users who listen to podcasts tuned in even more in the quarter, with consumption among those who engaged in podcasts in Q3 up 20% year-over-year.

But the success of the company’s podcasting arm could push critical artists of the likes of Rogan to find other avenues to reach their fans. And the podcasting arm isn’t exactly Spotify’s main draw. It’s the music.

“Without the music I don’t think Spotify has much of a corporate identity, and I don’t think the podcast business, at least for the moment, will replace that,” explained Paul Barrett, deputy director of the NYU Stern Center for Business and Human Rights.

Major artists could have an outsize impact on Spotify

Spotify is working overtime to keep artists on its platform. In the wake of Young’s departure, Spotify CEO Daniel Ek issued a lengthy statement laying out how the company will respond to COVID disinformation, saying that it will add content advisories to podcast episodes that discuss COVID, and will point users to its dedicated COVID hub.

The move was clearly meant to assuage any concerns musicians have about the kind of content Spotify is willing to host.

So far, it’s either worked, or artists haven’t found enough reason to join the ranks of Young and Mitchell. There’s also the possibility that artists’ labels simply won’t let them pull out of Spotify. But the duo has proven that two musicians can force the hand of the largest streaming service in the world, albeit not by all that much.

In the event that more popular modern artists take issue with Spotify’s content policies, however, the company will have to do more than issue a statement and slap a label on certain podcasts.

“Spotify will have to make a decision,” Barrett said. “’Do we go with the musicians and listen to them because that’s what our subscribers are really here for? Or is the future for us the podcast business…having sensationalistic figures like Rogan?’ In which case we’ll stick with that.”

Either way, Spotify may soon have to choose.

Editor’s note: We want your feedback. por favor take this quick survey to let us know if we should launch another newsletter. If the answer is yes, what type of content should the newsletter include?

Read the latest financial and business news from Yahoo Finance