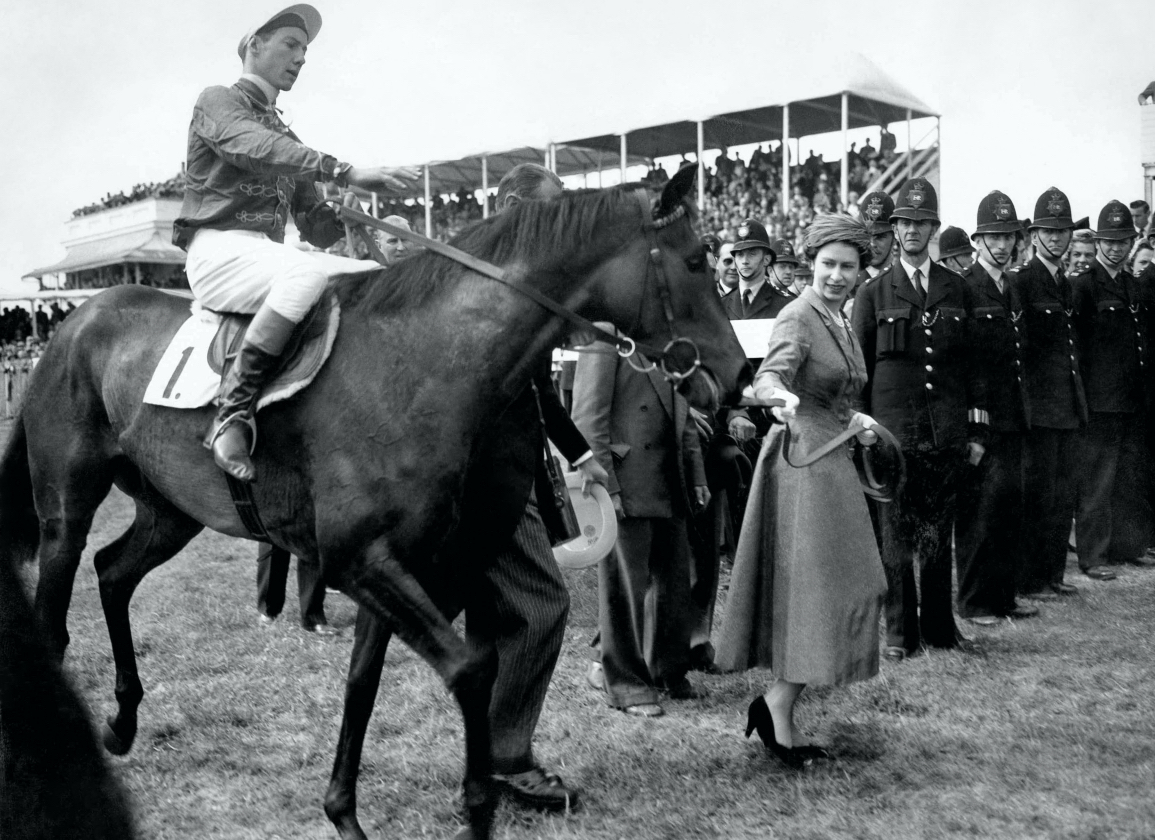 As the celebrations marking the Queen’s Platinum Jubilee begin in Britain, we continue our three-part series reflecting on Her Majesty’s long-standing commitment to Turf, written by John Berry

Aureole, who had been raised by the Queen’s father, was a wonderful standard-bearer at the beginning of her reign. While her father was alive, she and her mother had started owning jumpers, enjoying their first National Chase success together when the Peter Cazalet-trained Monaveen (competing in the same colors Astrakhan wore at Hurst Park) won fences. at Fontwell in October 1949 before taking the Queen Elizabeth Chase at Hurst Park two months later. However, after Princess Elizabeth became queen, her mother became the first lady of national game racing, while Queen Elizabeth took over the Royal Flat chain and Royal Studs with a passion that it has never wavered in the ensuing 70 years.

This successful start to his career as owner of Queen set the tone for what was to come next. After Aureole, the next star was another Hyperion colt, High Veldt, whose finest moment came when he came closer than any other horse to beating Italian champion Ribot when runner-up in 1956 King George and Queen Elizabeth S. The Royal Ascot triumphs from Jardiniere in the King George V S. in 1955 and Alexander’s in the Royal Hunt Cup in 1956 were great occasions, while Atlas’ victory in the 1956 Doncaster Cup proved to be the first of Her Majesty’s three career wins. a four-year stint, with Apprentice taking the race in 1958 and ’59.

It turned out that 1957 was a real annus mirabilis for the royal chain, which consisted of 21 home-bred to Boyd-Rochfort at Freemason Lodge augmented by some horses leased from the National Stud and trained by Noel Murless at Warren Place. The monarch renting horses from the National Stud was a tradition whose roots go back to 1907 when King Edward VII leased six yearling horses to Colonel Hall Walker (later Lord Wavertree) of Tully Stud in Ireland, whose handsome estate was given over late to the nation to be the National Stud and now it is the Irish National Stud. Minoru was one of this sextet, while in later years the habit was revived on the advice of royal blood steward Captain Charlies Moore, with the first batch of foals containing both Big Game and Sun Chariot.

Three fillies in particular looked very good in the spring of 1957: the pair Boyd-Rochfort from Mulberry Harbor and Almeria, and Carozza, trained by Murless. Carozza won the Princess Elizabeth S. at Epsom and Mulberry Harbor won the Cheshire Oaks, but Almeria struggled downhill at the Lingfield Oaks Trial, finishing a disappointing third. Mulberry Harbor and Caress continued on to Epsom for Oaks and, sensibly, Almeria waited for Ascot instead. At Epsom, Harry Carr wore the first colors at Mulberry Harbour, leaving 21-year-old Lester Piggott to wear a distinctive white cap at Carozza. Mulberry Harbor ran abysmally to finish last, but Carozza scored a thrilling victory, holding off a late challenge from the Irish Silken Glider raider by inches. It was the first royal triumph in an Oaks at Epsom (although, of course, Sun Chariot had won a wartime substitute at Newmarket) and the first royal classic winner at Epsom since Minoru won the Derby for the queen’s great-grandfather, Edward VII in 1909.

At Ascot, Almeria showed their Lingfield form was up to snuff by winning the Ribblesdale S. before beating the Irish Derby Hindu Festival runners-up at the Bentinck S. at Goodwood. He then won the Yorkshire Oaks at a canter before taking Park Hill S. at Doncaster. Carozza was unable to repeat the excellence he had shown at Epsom and retired after a poor race at Nassau S. at Goodwood, but Mulberry Harbor bounced back from his Oaks debacle (when he was suspected of doping) by taking Newmarket Oaks in the fall . At the end of the season, the Jockey Club handicap rated Almería as the best 3-year-old filly trained in England, Carozza as the second best and Mulberry Harbor as the third best. The Queen finished the year as champion owner for the second time, with earnings of £62,211. Eleven of the 21 horses at Freemason Lodge had won a total of 23 races, with Murless providing a further seven wins.

That glorious season would clearly be hard to follow, but the following year, when the queen finished second on the list of top owners, still held several more surprises. The brightest star was 3-year-old Pall Mall from Palestine, who had come early in his 2-year-old season the previous year, winning on his debut at Haydock before taking the New (now Norfolk) S. at Royal Ascot. . When it resumed in the spring of 1958, it struggled on Kempton’s heavy ground for the first time and thus failed to give Queen a fourth successive victory in the Kempton Park Test of 2000 Guineas (after Alexander, High Veldt and Doutelle), but then won the Thirsk Classic Trial earlier, when he was apparently second row in his stable, taking a surprising 20/1 victory under Doug Smith in the 2,000 Guineas, providing the Queen with her first home-bred classic winner . Smith’s presence in the saddle provided a nice note of continuity, as he had previously won a stake at the Rowley Mile in royal silks when he guided Hypericum to victory for King George VI in the 1,000 guineas 12 years earlier. .

The following month, Her Majesty enjoyed a double at Royal Ascot when Restoration won the King Edward VII S. (then the second most valuable race of the meeting, behind only the Gold Cup) on her racecourse debut and Snow Cat won the Rous Memorial S. At the Newmarket July meeting, Miner’s Lamp, previous winner of the Blue Riband Trial S. at the Epsom spring meeting, won the Princess of Wales S., in those days the most valuable race of the whole season in the field of July.

In addition, Almeria continued to train at age 4 in 1958 as did Above Board’s Prince Chevalier colt, Doutelle, who had been the Queen’s best colt of 1957, when he had suffered a very hard step in the Derby after winning the Derby. of Linfield. Judgment. Doutelle had a great start to the 4-year-old season by winning on his comeback at Newbury before beating champions Ballymoss at Ormonde S. in Chester. In the summer both Almeria and Doutelle lined up in the King George VI And Queen Elizabeth S. at Ascot and rode great races, finishing second and third behind Ballymoss who won the Prix de l’Arc de Triomphe in the autumn. .

Daughter of Alycidon out of the mare Hyperion Ávila (who had won the Coronation S. at Royal Ascot in 1949), Almería subsequently became an excellent broodmare, her products including the 1970 Doncaster Cup winner Magna Carta and the Albany heroine of the 1971 Prix de Psyché, herself the mother of the 1979 Queen’s Vase winner, Buttress. In a tragically short stallion career that ended when she died after an accident in her stable in December 1962, Doutelle produced several fine horses for the Queen, including the 1965 Eclipse S. hero Canisbay.

The 1950s ended with the continuation of the Queen’s form. She finished third in the owners’ championship in 1959 with two top-class 3-year-olds who made significant contributions, including taking a double at Royal Ascot when Above Suspicion won the St. James’s Palace S. and Pindari won the King Edward VII. s. Pindari (who was bred in the Classic Derby winner/Oaks winner formula out of Pinza and Sun Chariot) subsequently won the Great Voltigeur S. at York. In addition, two strong performances under heavy handicap weights stood out: Accord, midway between his two Doncaster Cup victories, won the Chester Cup and Pall Mall finished second in the Royal Hunt Cup. It’s hard to imagine the winner of last year’s 2,000 guineas taking part in the race today!

That Royal Ascot also included another winner for the Royal Family. Bali Ha’i (NZ) had been presented to the Queen Mother when she was touring New Zealand the previous year. She had gone to the Trentham races one day when she won Bali Ha’i and, learning that Her Majesty was admiring the horse, her owner kindly gave it to her. She brought it back to England and sent it to Cecil Boyd-Rochfort, who groomed it to win the Queen Alexandra S.

The Queen’s fortunes declined during the 1960s along with that of Boyd-Rochfort, who was nearing the end of his long and distinguished career. He had been trainer to champions in 1958 and finished second in the table in 1959, but in 1960 his horses suffered from a virus for much of the year and he fielded only 13 winners (none owned by the Queen) from a series of almost 60.. Fortunately things got a little better and actual Freemason Lodge winners during the decade included Canisbay, successful at Wood Ditton S. in Newmarket in 1964 and Eclipse S. in Sandown in 1965; Apprentice and Gaulois, who had successive Goodwood Cup victories in 1965 and 1966, the former having already won the Yorkshire Cup that year; Impudent and Amicable, winners of the Lingfield Oaks Trial S. in 1961 and ’63 respectively; and the Hypericum daughter Highlight, successful at Ash S. at Kempton Park in 1961.

Arguably the best horse the Queen ran in the 1960s was Hopeful Venture, a son of Aureole who was bred by the National Stud, from which the Queen leased him and sent him to Noel Murless at Warren Place. He proved to be a wonderful trouper. In 1967, when he was 3 years old, he won the Wood Ditton S. at Newmarket, the Grosvenor S. at Chester, the Princess of Wales’s S. at Newmarket and the Oxforshire S. at Newbury. He also finished second in both the King Edward VII S. at Royal Ascot and the St. Leger. The following year he won the Ormonde S. at Chester, the Hardwicke S. at Royal Ascot and the Grand Prix de Saint-Cloud, beating a first-class field that included subsequent Prix de l’Arc de Triomphe winner Vaguely Noble. .

A new trainer was added to the royal roster when Captain Peter Hastings-Bass received half of the Queen’s yearling admission in the autumn of 1963 at Park House Stables in Kingsclere, near Polhampton Lodge Stud, at which the Queen I had taken a lease the previous one. year to replace the old royal stallion at Hampton Court. Kingsclere has been home to many of the Queen’s horses ever since. Tragically, Peter Hastings-Bass died of cancer, aged just 43, the following year. The Queen remained a patron of the stable when Hastings-Bass’s assistant, Ian Balding (who later married Emma, ​​the daughter of Captain Hastings-Bass), took over, as she also did subsequently when Balding handed over to his son Andrew in 2003. The family connection was further strengthened when Captain Hastings-Bass’s son William (now Lord Huntingdon) began training at Newmarket in 1977 having served as assistant trainer to Noel Murless, and subsequently it held the royal stables in West Ilsley during the 1990s.

One of the first horses William Hastings-Bass trained for Her Majesty was Australia Fair (Aus), a daughter of Without Fear (Fr) that the Australian nation presented to the Queen as a Silver Jubilee gift. Sadly, neither she nor her offspring achieved anything noteworthy with the royal colors, but she did breed the high-class sprint handicapper Double Blue, a son of the Town Crier Town And Country stallion, whom the Queen, long-time racing manager term, the 7th Earl of Carnarvon (formerly Lord Porchester), was standing at Highclere Stud. To continue a lasting family connection and friendship, the late 7the The Earl of Carnarvon’s son-in-law, John Warren, succeeded him in 2001 as Queen’s racing manager, a position he holds to this day.

If you missed the first part of this series, you can catch up here.