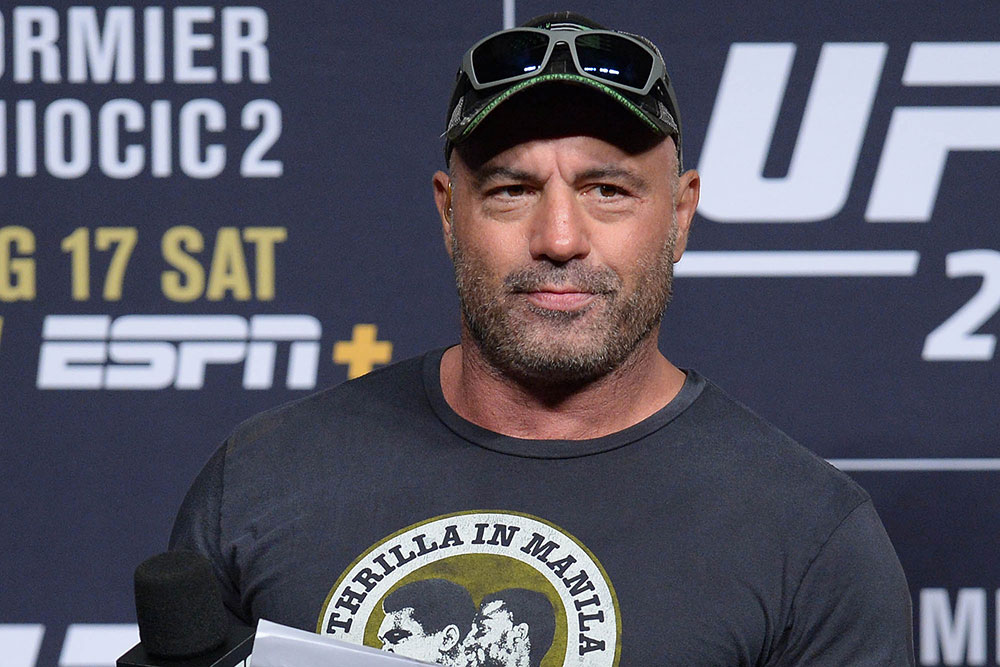 Sanko, a regular member of the UFC’s broadcast team on ESPN, primarily with backstage fighter interviews, is not standing up for Rogan’s recent controversies, per se. But she also doesn’t think he should be given a proverbial life sentence with no chance for redemption.

Rogan has come under fire in recent weeks. The longtime UFC analyst, whose “Joe Rogan Experience” podcast was bought by Spotify in 2020 for a reported $100 million, was the target of nearly 300 doctors and scientists, who sent a letter to Spotify asking the streaming platform to put a stop to what it deemed COVID-19 misinformation after Rogan had Dr. Robert Malone on his show in December. Rogan has had guests with other controversial opinions on the pandemic on his show, as well.

But the narrative shifted beyond COVID when singer India Arie circulated clips of Rogan using the N-word on past episodes of his show. Roughly 70 past episodes of Rogan’s podcast have been pulled from Spotify, and the company’s CEO said it was due to discussions with Rogan and “his own reflections on him.”

Rogan has apologized for the N-word usage and also said he would try to better balance his podcast guests in light of the COVID misinformation claims.

sanko awning Middle Easy because she’s not Black, she won’t form an opinion on being offended by Rogan’s past use of the N-word.

“It’s a difficult question on many levels because I think first and foremost, it’s important to – for me, at least – that I’m not allowed to have an opinion about what other people should be offended about when the offense has nothing to do with me, or my life, or my situation,” Sanko said. “So I want to make it very clear that in support of Joe Rogan, I absolutely would not be supporting the things that he said.

“That compilation video is awful. But I guess my entire opinion on the situation is formed on the fact that Joe Rogan thinks it’s awful. It’s not as if Joe Rogan came out and made a ton of excuses or said that he stands by those comments or those things that were said. He came out and made a – I felt like – very heartfelt, genuine apology, not only on that topic, but of course, the previous topic about the COVID-19 podcasts he had done…”

Sanko said she thinks the members of the camp that thinks Rogan should be shut down entirely are misguided.

Within the UFC and MMA community, there has been an almost overwhelming outpouring of support for Rogan to not be canceled and, in essence, for the world to accept his apology and move on.

Middleweight champion Israel Adesanya, who headlines UFC 271 on Saturday, took the most prominent stance of any fighter yet. Adesanya, a Black man born in Nigeria and living in New Zealand, said the “c*nts” and “snakes” in the sport are trying to cancel “one of the nicest, coolest, humble motherf*ckers” he knows. He said Rogan should “f*ck the noise” and push on.

Sanko thinks Rogan should be allowed to learn from what he did and get better.

“I think cancel culture in general is a very dangerous, slippery slope because the end game of cancel culture is not feasible,” she said. “We would all love to be able to cut all hatred, all misinformation, all negativity out of the world and have everyone live in a place where we all feel uplifted and positive. But it’s impossible to do that.

“And I think when you take someone who has done something horribly offensive, and they apologize, and you still stay, ‘No, no – you should be silenced from here on out,’ you take away all opportunity for growth and healing and reconciliation . And that, I feel like, is, more than anything, what’s missing in the world right now. … I think in terms of the idea of ​​canceling people who, in the past, have done offensive things – I sure wouldn’t want to be judged by my worst day in the office; I don’t think anybody would – to provide people an opportunity to say, ‘I was wrong,’ or ‘I will do better,’ and allow them the chance to do that, allow them the chance to be better, allow them the chance to never make that wrong decision again, I think that’s what’s important.

“…I think Joe is a good person. I genuinely do. And I think Joe overall has very, very good intentions in terms of the information he brings forward and the way that he treats people and every personal interaction with him I’ve ever had been 100 percent positive. But I think more than anything, he’s aware that what he did and said was not right, and he’s apologized for it, and I think we should take him at his apology and judge him on his actions here on out.

Photos: Joe Rogan through the years