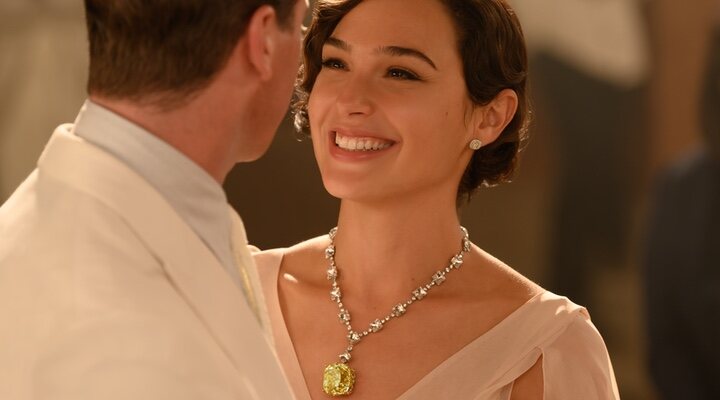 ‘Death on the Nile’ brings us back to Kenneth Branagh as Hercule Poirot after his first mystery in ‘Murder on the Orient Express’, released in 2017. The characteristic style of the British jet set of the 30s that is associated with the novels by Agatha Christie plays a pivotal role in the film, and For this, the director chose Paco Delgado, nominated for an Oscar for Best Costume Design for ‘The Danish Girl’ and ‘Les Miserables’.

The designer has explained that both he and Branagh wanted that, although the aesthetics of the time would be maintained, it would connect with the contemporary public, so some changes were introduced. One of the most significant is the pearl necklace from the book for the Tiffany & Co. diamond we see around Gal Gadot’s neck. According to Delgado, it was not he who proposed it, but rather it was already in the script when he arrived. However, he thinks that this emblematic jewel, which has only been worn by Audrey Hepburn and Lady Gaga, has a great effect (or “bling bling power”) and has a greater impact on today’s public than pearls.

To represent the elite of the moment, they paid a lot of attention to Parisian fashion with brands like Chanel. In addition, they sought that each of the characters had a reference among the celebrities of the 30s. In the case of Gadot, they looked at the actress Carole Lombard, and in the case of Euphemia Bouc (Annette Bening), her models were Katharine Hepburn and Marlene Dietrich..

We met the Belgian detective Hercule Poirot in ‘Murder on the Orient Express’. However, here his wardrobe is totally different. We went from the dark tones of the first film to the light ones and to finer fabrics. As Delgado has explained, this is because at first he seems to be on vacation and dresses as such. On the other hand, the closer we get to the end of the film, we see how he returns to what would be his “Workwear”.

The director had already told that this new mystery would be a version more “sexy and dark”. The designer believes that this is felt in the film, where human passions are becoming stronger and everyone is in love with someone and that leads them to behave in ways they would never expect. In fact, the plot of the film begins with a couple, Jaquelline de Bellefort (Emma Mackey) and Simon Doyle (Armie Hammer), who seek help from Linnet (Gadot) to get a job and get married. Everything will be very different when they meet again in Egypt.

Among other technical specifications, Delgado has previously clarified that the approximate budget to carry out the costumes was one million euros, since he had to dress 14 characters who had between 12 and 16 changes. In addition, many of the costumes had to be made double or triple, because there are scenes that took days to shoot and could break or stain.

‘Death on the Nile’ hits theaters on February 18.