‘Euphoria,’ You Don’t Need To Do Everything 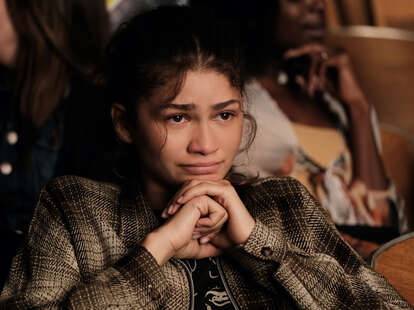 If, for some reason, you tuned into euphoria for the first time ever for its Season 2 finale—and managed to completely miss the countless memes and online chatter about it beforehand—you might not have any clear sense of what the show actually is about. Is it a gritty crime drama where 12 year olds engage in Scarface-like shootouts every episode? Is it melodrama that belongs on The CW where complicated teens turn their parents over to the police and occasionally break out in song? Or, is it an earnest series that explores how genuinely sad young people can be?

On Sunday night, the HBO drama helmed by Sam Levinson wrapped up its eight-episode second season with “All My Life, My Heart Has Yearned for a Thing I Cannot Name” that somehow felt like all of those things at once. After a season that was at times artistic and engaging and others frustrating and exhausting, the end of euphoria was simply overwhelming. as the euphoria finale attempted to be a crime drama more than it ever had been before, it lost sight of when it really shines: when it focuses on the emotional turmoil of each of its individual characters.

euphoria perhaps you have always needed a little bit of restraint, and the finale proved how exhausting it can feel when it refuses to hold back at all when it probably should. The episode also failed to answer a handful of questions—like Rue’s deal with Laurie going awry, Fezco’s fate and how that will effect Lexi, and Rue and Jules’ relationship—and as the show will presumably tackle these conflicts in Season 3, it’ ll be tasked with finding some grace in doing so, instead of making a crime drama out of it all.

The finale was a direct continuation of Episode 7, “The Theater and Its Double,” resuming in the middle of Lexi’s (Maude Apatow) play Our Life and the drama unfolding at Fezco’s (Angus Cloud). Furious with how her younger sister portrayed her, Cassie (Sydney Sweeney) interrupts the production by jumping on stage, going off about how she’s “lived” and Lexi hasn’t, and attempts to justify hooking up with her best friend’s ex Nate (Jacob Elordi), which erupts in a confrontation between her and Maddy (Alexa Demie). Meanwhile, we see that as Fezco is about to leave for the play, he realizes that Custer (Mouse’s former associate played by Tyler Chase) is a police informant and a raid is imminent. It’s then that the show takes an overwhelming turn; Ashtray (Javon Walton) impulsively slashes Custer’s throat and locks himself in the bathroom with all of their weapons, convinced that he can face off with the authorities from behind the door, so Fezco won’t have to take the fall for what he’s done. When the police arrive, a shootout of Tarantino-like caliber ensues, with Fezco begging his little brother to cease fire, and he’s ultimately wounded and Ashtray is killed.

While that’s going on, the show also continues its confounding attempt at giving Nate—who, yes, is the product of abuse, but also abuses women himself and let another boy take the fall for his wrongdoings—some semblance of a redemptive arc. It turns out, he stormed out of the play to confront his father, Cal (Eric Dane), who had been partying and hiding out at his business’ warehouse facility, and turned him over to the police for soliciting prostitution. But as the show must go on, Lexi’s play also resumes, resulting in a standing ovation and the finale’s few endearing moments.

It was as if euphoria mishandled its characters this season, right up to the last moments of the finale. Hunter Schafer and Barbie Ferreira, who play Jules and Kat, were severely underutilized. Sydney Sweeney’s Cassie was needlessly degraded, and yet, we were supposed to find Nate redeemed for confronting his father who he once defended. In many ways with how the season ended, it felt like storylines were rushed to wrap up so that Season 3 could start with a blank slate. All season, Cassie tortured herself for being with Nate—only for them to break up and her de ella and Maddy to fight it out in the finale, like none of it even mattered. The same goes for Dominic Fike’s character Elliot, who brought recklessness into Rue (Zendaya) and Jules’ life from her, only to admit to Rue that they probably shouldn’t stay friends going forward. (That was after he performed her an original song, which, although it was sweet, it scanned like a “stream Dominic Fike on Spotify” plug.)

When the finale reeled itself back to focus on the elements of the show that fans tend to connect with most, that’s when it felt like it still had a glimmer of what makes it a special teen drama. While Ashtray’s ultimately cruel and unnecessary death may have gotten the most gasps, it wasn’t the most emotional moment in the episode. It was when Rue reconnected with Lexi, she commended her for the ways in which she processes her trauma from her, and the two girls comforted each other in their pain. When the show is fearlessly vulnerable—from its explorations of addiction, depression, gender identity, and grief—euphoria is at its best, and it’s what we can hope it holds onto going into Season 3.

Throughout the season, fans had been theorizing about euphoria like wild—coming up with theories on TikTok and Twitter that saw one character as another’s long-lost brother and suspecting a sex-trafficking scandal was about to surface, interpreting the show as something closer to Riverdale than an HBO drama. Perhaps that wasn’t necessarily their fault, considering how far off the rails this season went at times. Zendaya has even spoken about this, quoted in Interview saying, “There’s two versions of euphoria: the TikTok version, and the real story that digs a lot deeper.” Here’s to hoping that the show returns to form in Season 3, exploring its complex characters’ emotional turmoil—and it doesn’t continue to become the TikTok version of itself that it claims it’s not.