Review: Gloomy nights for the Dark Knight in ‘The Batman’ 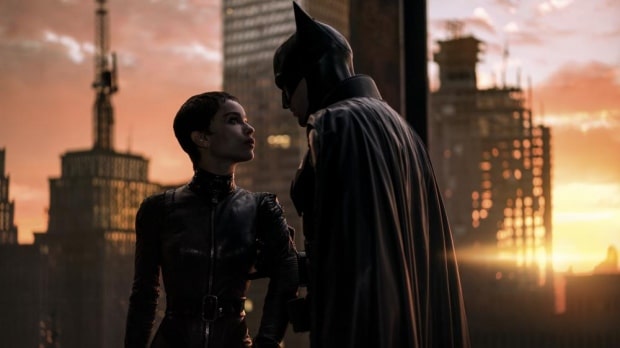 Reeves’ three-hour-long “The Batman” includes plenty of action, character introductions, gadgets and other various superhero accoutrements. But it is not extravaganza. This “Batman” is a morose mood piece, soaked in shadow and rage, that has stripped the comic’s archetypes down to abstracted silhouettes and grubbily human characters. If Jim Carrey’s Riddler were to wander into this movie, he would fit in about as well as Bugs Bunny in “Taxi Driver.”

Scorsese’s movie, with Travis Bickle sneering at societal collapse, was a prominent influence on Todd Phillips’ muddled “Joker,” but it may be more so for “The Batman,” which likewise remains on the precarious psychology of its DC protagonist. Robert Pattinson’s is a young Batman, relatively new to the gig and suffering mightily from the nightly battles with Gotham’s most depraved. A feeling of helplessness consumes him, and a sense that he can never stem the tide.

Reeves, the “Planet of the Apes” filmmaker, starts “The Batman” with numerous such gravely voiced intonations — “They think I’m hiding in the shadows, but I AM the shadows” — in a stunning, operatic montage set to Nirvana’s “Something in the Way.” It’s an electric fusion of imagery and sound, and the movie’s most fully realized section. This “Batman” is directed.

The issue, though, is that “The Batman,” having found its tone and immersive atmosphere, wallows in it. There is surprisingly little suspense because the film struggles to find more than one note (powerful though it is) to strike. Even Pattinson’s Bruce Wayne is just as downbeat and serious as his Batman. Like a Paul Schrader character, he has abandoned nearly all social engagement, instead tortuously writing a diary to document the horrors he witnesses nightly. Pretty much since Adam West put on the cape and cowl, Batman has steadily grown darker. But Pattinson’s despondent Dark Knight takes the cake.

The comic blueprint is “Batman: Year One,” Frank Miller and David Mazzucchelli’s 1987 four-issue series in which Wayne turns vigilante. That step — a citizen taking up violence in the name of justice — is much the subject of “The Batman.” And while Reeves’ film is seldom overtly topical, it’s clearly colored by predominant social justice issues. Today, vigilantism is most associated with cases like George Zimmerman, Kyle Rittenhouse and the fatal shooting of Ahmaud Arbery. “The Batman,” mobbed with crooked cops and culminating in a terrorist plot of masked “fringe-types,” reflects much of our grim current reality. In the course of the film, Batman’s doubts about who gets to get out justice only grow.

OK, but does Batman, like, kick some butt, too? What about the Batmobile? It’s not all just a seedy slog through the Gotham sewer, is it? Well, almost. “The Batman” is structured as a detective story. There’s a delightful scene where he, in costume, stalks a crime scene he’s been sneaked into by detective Gordon (a fabulous, melancholy Jeffrey Wright). It’s a framework — a Batman of questionable vision and even more dubious self-awareness hunting clues — that makes “The Batman” a distinctive work separate from previous movie iterations of the character.

But as Reeves and co-writer Peter Craig weave in the antagonists of this Gotham underworld — a serial killer named Edward Nashton aka the Riddler (Paul Dano, leaning into serial-killer tropes), the crime lord Carmine Falcone (a suavely villainous John Turturro ) and a mid-level mobster Penguin (Colin Farrell, unrecognizable) — “The Batman” wears other influences, like David Fincher’s “Seven,” more obviously.

As firmly gripped as “The Batman” is early on, you can feel its hold slipping as it extends into its lengthy running time, and I think that’s partly because Pattinson’s performance is largely limited to either sudden eruptions of fury or timid skulking in the shadows . For an actor who has long stayed clear of the mainstream, it’s thrilling to see him take on something this ambitious. But Pattinson’s talent lies in his cryptic charisma and that’s not always a compelling fit for a three-hour psychological portrait. He’s no chatterbox, this Batman.

Zoë Kravitz, however, has a more instant and intimate bond with the camera. As Selina Kyle/Catwoman, she gives “The Batman” a major lift even while leading it down some of its darkest alleyways. After Selina joins with Batman as they investigate the corruption surrounding Falcone and others, he outfits her with video-recording contact lenses. In one of the film’s most arresting sequences, we see her from her perspective as she infiltrates the bad guys’ nightclub and, in night vision, we feel the readers of the men that crowd her.

“The Batman” is darkly dour stuff—potent but erratic. It’s as though the filmmakers, working in the very long shadow of “The Dark Knight,” have opted not to rival the moody majesty of Christopher Nolan’s genre-redefining 2008 film but instead to simply go “harder” — blacker, more cynical, a full eclipse. That may make “The Batman” properly suited to its times but it also makes it, ultimately, feel like a somewhat hollow if often grippingly pitch-black exercise in an imagined arms race of severity. “The Dark Knight” had a visceral splash in Heath Ledger’s Joker that “The Batman” sorely misses. Someone, somewhere here should be asking why so serious.

“The Batman,” a Warner Bros. release, is rated PG-13 by the Motion Picture Association of America for ”strong violent and disturbing content, drug content, strong language, and some suggestive material.” Running time: 175 minutes. Two and a half stars out of four.