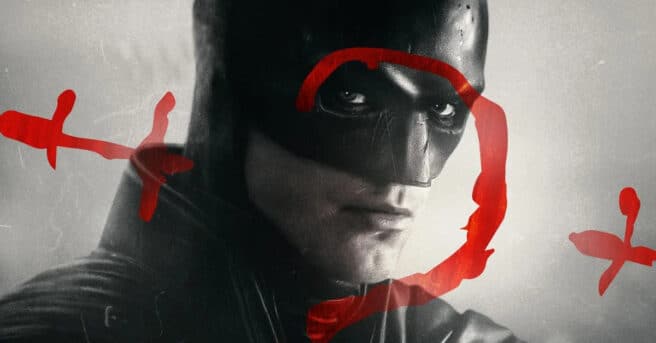 PLOT: When a series of horrific crimes target political figures in Gotham, Batman must work with James Gordon and Selina Kyle to uncover the motivations behind the attacks.

REVIEW: It’s clear from the beginning that Matt Reeves’ batman is something completely different from what we’ve seen before. The filmmakers’ take on the Caped Crusader also happens to be spectacular, a tale that twists and turns until the final and sublimely haunting end comes to pass. The new feature starring Robert Pattinson as Bruce Wayne/Batman, Zoë Kravitz as Selina Kyle/Catwoman, and Paul Dano as Edward Nashton/The Riddler is a beautifully realized neo-noir thriller. It places just as much emphasis on the mystery building as it does the well-crafted action. And it does so in a shockingly grounded way. There’s a powerful tone and atmosphere created here, one drenched in a pulpy and occasionally terrifying exploration of this iconic character and those that cross him. batman is a bold and brilliant examination of a young Dark Knight.

Darkness has consumed Gotham City in the form of a deadly serial killer. When a string of horrific murders/attacks targeting political figures leaves the local law enforcement in the dark, it begins to bring a deep fear to those that may be next in line. The criminal deeds convince James Gordon (Jeffrey Wright) and Batman (Pattinson) to thrust themselves into the investigation. With each act of violence, the investigating officers discover a series of riddles and clues that may hopefully bring them closer to a suspect. However, this disturbed individual is always a few steps ahead of the police, leaving them desperate for answers. Things get even more complicated when Batman convinces Selina Kyle (Kravitz) to use her connection to the dark underbelly of high society to uncover what secrets the powerful ones are keeping.

batman is a superhero tale far more in line with the gritty and darker elements of the popular comics that came before – and they are certainly an inspiration. You may even notice the nod to a few 70’s classic flicks. Matt Reeves has an understanding and a love for these characters, which is very apparent. With a script written by Reeves and Peter Craig, the film takes an unexpected turn considering the massive blockbuster exploits we’ve seen from Christopher Nolan, Tim Burton, and Zack Snyder. This modern tale is refreshingly dark, with elements that create a shockingly creepy movie-going experience. Even with its extended runtime, the way it all unfolds is effortlessly satisfying to watch. As visually impressive and scary as this world can be, you can’t help but enjoy the experience of taking in all of the sights that Reeves presents. It’s not all dark, as moments of levity work especially well when they arrive.

Speaking of this exciting new world, one of the most engaging elements is the reality of this universe. Matt Reeves brings a sense of this into the mix. Even during the brutal moments of the battle, when Batman takes on a group of thugs or what have you, it feels at times frighteningly grounded in some semblance of truth. Pattinson’s Bruce Wayne / Batman is conflicted as he seeks vengeance against the criminal forces that plague his city. Yet his inclusion of him during investigations feels about as truthful as you could get in a film such as this. For many of the officers working with James Gordon, this creep in a bat suit only makes a joke of their work. It’s yet another fascinating element that brings something refreshingly new to the events in the film. That’s part of the appeal, making this story more in line with a noirish detective story.

And then there is Batman and Catwoman. Both Robert Pattinson and Zoë Kravitz are electrifying. Mr. Pattinson brings a nuanced and tortured hero to the big screen. Even after he successfully fights off the local punks with the help of his bat suit, he always returns bruised and battered. The actor brings all the aspects of Wayne and his secret identity to life in perfect form. And it helps that his past of him and his parents of him are examined far more than we’ve seen in previous films. Plus, the little touches on how he differentiates The Batman from Bruce Wayne make a ton of sense. And while Ms. Kravitz does not quite have the most technologically advanced catsuit, her physical prowess and her performance make it easy to believe that she could do the kind of nine live acrobatics that she does. When these two are on-screen, it’s easy to get lost in their equally engrossing character arcs.

The beating heart of batman is a nuanced tale of vengeance and the horrors that condemn those seeking it. And the collection of villains and suspects all add equally to this incredible feature. Colin Farrell is unrecognizable. His take from him as The Penguin is perfection as he creates a full-fledged character without being cartoonish. Peter Sarsgaard has the chance to shine as District Attorney Gil Colson. And then there is Paul Dano, who is as sensational as he is terrifying. In order not to go further and reveal more about the plot, I will say the less said about the secrets behind these marvelous performances, the better. And on the heroic side, the casting of both Andy Serkis as Alfred and Jeffrey Wright as James Gordon is an inspired choice. The two actors make for a natural fit with Pattinson.

Matt Reeves’ batman is one of the most original and twisted comic book adaptations ever made. For me, it’s the best Batman thus far. And that says something considering some of the terrific past features, like the masterful Dark Knight or even the fun that Tim Burton had early on. Even with a near three-hour runtime, this tale is alive with energy. From the impressive cast to the terrific script to the exceptionally eerie score by Michael Giacchino, this return to Gotham is more than a satisfying experience. Reeves took an original route to tell this story, similar to what James Mangold accomplished with the excellent Logan in 2017. Both bring a level of reality to their prospective series of films, and both are two of the best superhero adventures ever to find their way into the cinema. The Batman opens this Friday, in theaters, and it’s well worth witnessing on the biggest screen possible.