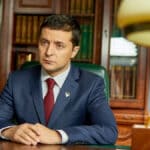 Since Ukraine President Volodymyr Zelenskyy became globally revered for bravely leading his country during the invasion from Russia, interest in his prior work as an actor and comedian has also piqued.

In particular, his 2015 sitcom “Servant of the People” has been seen to rise in sales, as international broadcasters seek to air the series. Some of the networks that have recently licensed the show are Channel 4 in the UK, MBC in the Middle East, ANT 1 in Greece and PRO TV in Romania.

But, is there a way to watch “Servant of the People” in the United States?

Unfortunately, the show is not currently licensed in the US — meaning that there is not a convenient way to watch. Before Zelenskyy began his bid for the presidency, the show streamed on Netflix.

But the streamer’s deal ended after two years, according to Fredrik af Malmborg, managing director for the show’s licensing company, Eccho Rights. For now, the US rights are still up for grabs.

Until a company snags the rights to the show stateside, episodes of the show appear to only be available in the US on YouTube.

“Servant of the People,” ironically, follows Zelenskyy as Vasiliy Petrovich Goloborodko, a high school teacher who becomes president after a student’s video of him denouncing corruption in Ukraine goes viral. Produced by Zelenskyy’s Studio Kvartel 95, “Servant of the People” ran for three seasons beginning in 2015 and also spawned a spinoff movie.

The series ended in 2019 when Zelenskyy actually ran for president — funnily enough under a political party of the same name. “It’s an amazing story really,” Malmborg told TheWrap. “I believe he’s grown to be a very strong leader for his country.”