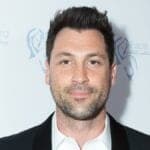 “Dancing With the Stars” alum Maksim Chmerkovskiy is safely home in the United States, but the Ukranian-born champion ballroom dancer says he is still processing what he went through to escape the war-torn country — and doesn’t feel very good about Item.

“I know for a fact that I’m going through something mentally,” Chmerkovskiy told “GMA” correspondent TJ Holmes on Friday morning. “I get into these moments when I get emotional. … I can’t control it. I cried on the way from the airport. I felt embarrassed the entire ride back because I was the only man on the train amongst all women and children.”

Over the past several days, Chmerkovskiy chronicled his escape from Ukraine, where he had returned to film a television special just before Russia invaded. Born in Ukraine’s port city of Odessa, the 42-year-old’s family immigrated to the United States in 1994. He became a US citizen in 2019.

Chmerkovskiy told “GMA” about his arrest in Ukraine for a curfew violation before his escape — and how his own celebrity spared him from a bigger hassle.

“I pull out my American passport, he starts speaking English with me, I said, ‘I speak Russian,’ then I regretted saying that,” Chmerkovskiy recalled. “Then the guy next to him goes ‘Oh, that’s the judge from ‘Dancing with the Stars,’ that’s Maks, I know him, he’s from TV.’”

With that, he was waived on.

“It’s not like I was gonna get shot. I was going to probably get put somewhere where I can sit until they figure out who I am… but I felt like things got real and all of the sudden I don’t actually have all of the things I need to feel safe in this place at there. I’m not built for this at all.” 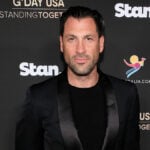 Chmerkovskiy said he boarded a train from a cold, cavernous station packed with refugees. And given that Ukraine has banned men aged 18-60 from leaving — they are expected to stay behind to help fight Russian invaders — he stood out like a sore thumb.

“It was horrible,” he said. “I realized after we took off, all the people that didn’t get in have to now sleep right there in that train station. It’s not heated, just a giant building, it’s cold. Kids everywhere — kids everywhere … I’m dying inside because this is still very emotional stuff. Babies everywhere.”

Holmes asked Chmerkovskiy outright if he felt guilty for getting away.