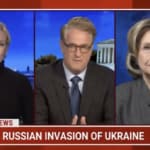 Despite rumblings to the contrary in certain corners, former Secretary of State and presidential candidate Hillary Clinton does not plan on running for president again. In fact, when asked on “Morning Joe” if she’d be open to running, Clinton quite literally laughed out loud.

Clinton appeared on the MSNBC program in conjunction with winning the Forbes International Women’s Day Lifetime Achievement Award, and towards the end of the conversation co-host Mika Brzezinski asked if Clinton would be open to running for president again sometime in the future.

The former senator laughed and replied, “Well no. But I am certainly going to be active in supporting women running for office and other candidates who I think should be re-elected or elected, both women and men, because I think there’s a bit of a debate going on, as you know so well Mika, in our country but in other countries as well, about the future of democracy, of economic opportunity, of climate change, of health and other important issues. So I will stay active in all of those debates.”

As President Joe Biden struggles with low polling numbers, some have called for Clinton to step back into the presidential race in 2024. But Clinton seems to be sticking to her previous assertion that the 2016 race was her final bid for president.

The former Senator from New York first ran for president in 2008, but she lost the Democratic Primary to Barack Obama who would then go on to win the general election. Clinton served as Obama’s Secretary of State from 2009 to 2013, at which point she departed the post to explore a presidential bid. After winning the Democratic Primary in 2016, Clinton lost the general election to Donald Trump.

See also  Soon you will see 'Spider-Man: No Way Home' in streaming; check the release date