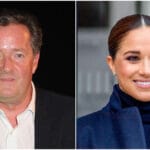 The TV host, who quit ITV’s “Good Morning Britain” last year following an argument with his coworkers over his comments about Meghan Markle and her Oprah Winfrey interview, has announced — on the anniversary of his departure — his new show.

“A year ago today, I was forced to leave a job that I loved, at the peak of its success, for having the audacity to express an honestly held opinion,” Morgan said in a Twitter video posted Wednesday morning. “Well, this shouldn’t happen in any democracy supposedly built on the principles of free speech and freedom of expression. So I’m delighted to now be returning to live television with a new primetime show whose main purpose will be to cancel the canceled culture, which has infected societies around the world. I want it to be a platorm for lively, vigorous debate, for news-making interviews and that increasingly taboo three-letter word, ‘fun.’ I also want it to annoy all the right people. I’m ‘Piers Morgan Uncensored.’”

Launching later this spring, Morgan’s 60-minute show will air on TalkTV in the UK, Fox Nation stateside and Sky News in Australia.

“Piers Morgan is a fearless journalist and broadcaster with an unmatched ability to engage audiences internationally. With Piers Morgan Uncensored, we’ll be doing something genuinely new – a daily show created for a global audience,” Winnie Dunbar, executive editor, TV at News UK, said in a statement.

Morgan stormed off the set of “Good Morning Britain” last March after a co-host called his comments about Markle (he’d previously said he didn’t believe the Duchess when she expressed to Oprah Winfrey that she’d had suicidal thoughts during her time in Britain as an official part of the monarchy) “diabolical.”

“I understand that you don’t like Meghan Markle,” co-host Alex Beresford said at the time. “You’ve made that so clear a number of times on this program — a number of times — and I understand that you’ve got a personal relationship with Meghan Markle, or had one of her and she cut you off. Ella she’s entitled to cut you off if she wants to. Has she said anything about you since she cut you off? I don’t think she has her, but yet you continue to trash her.

“OK, I’m done with this,” Morgan said to Beresford as he exited. “Sorry. No. Sorry. You can trash me, mate, but not on my own show.”

Ofcom in the UK launched an investigation following Morgan’s comments after receiving 41,000 complaints. He was later cleared of any wrongdoing.