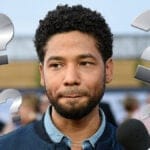 “He’s out,” Jussie Smollett’s attorney announced Wednesday evening, just hours after the former “Empire” star was ordered released from jail as he appeals his conviction for lying to Chicago police about a staged 2019 attack.

With TV news crews transmitting the video live, Smollett was escorted to a waiting car by a group of bodyguards around 8 pm Central Time. The actor did not speak as reporters shouted out questions.

Moments later, his attorney Nenye Uche held a news conference outside the jail and said Smollett should never have been locked up. He blamed racism for the way the actor was treated.

“We’ve been complaining about the disparate treatment of African Americans,” Uche told reporters. “He was put in a cage for a class 4 felony, shame.”

The attorney blasted the special prosecutor in the case for charging Smollett after the initial charges were dropped by Cook County State’s Attorney Kim Foxx in March 2019.

“Let me make something clear, there is no room for politics in our court system and our appellate courts in this great state,” Uche said.

I have included a message for the special prosecutor, “Shame on you.”

The news conference came shortly after an appeals court granted a motion that Smollett be freed on bond pending the appeal of his conviction for falsely reporting to police that he was the victim of a racist and homophobic attack. In a 2-to-1 decision, the court said the actor should be freed after posting bond.

Smollett, who is Black and gay, claimed he was assaulted on the streets of Chicago after making a Subway sandwich run in the early morning hours of Jan. 29, 2019. 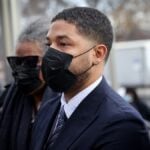 Police later said the whole thing was staged and accused Smollett of hiring two brothers to rough him up in a bid to get attention. However, Smollett has maintained his innocence of him throughout the three-year ordeal.

The case has taken a series of bizarre turns and in December 2021, Smollett was convicted of five felony counts of disorderly conduct in the case. Last week, he was sentenced by a Cook County judge to 150 days or five months in jail for lying to Chicago police about the attack.