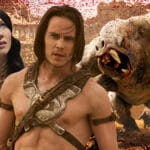 This week on “TheWrap-Up,” host Sharon Waxmann and guest co-host and TheWrap assistant managing editor of audience, adam chitwoodtake a look at the latest Hollywood headlines, including the tragedy in Ukraine, and the cost to journalists trying to cover the event, and how Disney CEO Bob Chapek’s response to employees over Florida’s “Don’t Say Gay” bill became a debacle.

Then, after Sharon shares her weekly Wax-on/Wax-off picks, we move on to our reporter Drew Taylor’s massive deep dive into what went wrong with Disney’s 2012 film “John Carter” — the blockbuster that wasn’t. Taylor takes us into his extensive reporting on him and reveals which major actor was lobbying for the lead role that eventually went to Taylor Kitsch.

And finally, Sharon brings us her an emotional interview with Oscar Best Director frontrunner, “The Power of the Dog’s” Jane Campion. She’ll open up about being a trailblazing woman in Hollywood, and discuss how the #MeToo movement emboldened her as an artist.

Listen to this week’s “Wrap-Up” below:

“TheWrap-Up” won the Best Hard News Feature award from the LA Press Club in 2021 for the segment “The Complexities Black Journalists Face This Week Covering Protests.” It is hosted each week by founder and editor-in-chief Sharon Waxman. She dives into the biggest headlines of the week in the world of movies, television, streaming and tech.