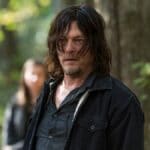 “The Walking Dead” star Norman Reedus says he’s “getting better” after suffering a concussion due to an accident on the set of the AMC series.

“Thank u for the nice thoughts it’s been a week. or two.” the actor said on Instagram. “I was in an accident. but getting better getting cleared and gonna be back at work Tuesday they tell me. And sorry about Atlanta event I was looking forward to it.”

Reedus also thanked fans for their well-wishes after the death of his cat Eye in the Dark earlier in March: “Most of all thank you for the eye in the dark messages I really loved that little cat.”

The actor was injured on the set of “The Walking Dead,” which subsequently delayed filming on the series’ 11th and final season by a few days.

While production is underway on the last season of the flagship AMC show, Reedus is poised to continue the story of his character in an untitled spinoff show opposite Melissa McBride’s Carol. The so-called “Daryl and Carol Spinoff” doesn’t yet have a firm debut date beyond 2023, as “The Walking Dead” Season 11 is rolling out episodes in three blocks.

The expanded final season consists of 24 episodes in total and began airing last August, with the second block having begun airing this past February.

admin
See also  Downton Abbey 2 is coming soon, but what about Maggie Smith?