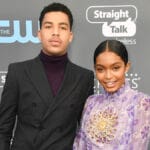 Encapsulating any generation accurately on television isn’t easy. As Des Moran and the rest of the “grown-ish” writers room have come to find out, it’s a particularly difficult task when writing about Gen Z — a group of young people who are currently entering adulthood and aren’t too keen on being generalized.

This is especially true when exploring Gen Z relationships, which might feel much more progressive than those of generations past. In some ways, they are. But, in other ways, their dating woes feel quite familiar, Moran told TheWrap.

“I think the surprise to all of us was that [we’ve been] living in this progressive bubble and reading articles about how all of Gen Z is queer, and being cisgender and being heterosexual are not even things that Gen Z is anymore,” he explained. “And the more college kids we talked to the more we saw, like actually, that’s not necessarily true. I mean, in a certain capacity it is, but there are a lot more perspectives and points of view.”

While this generation may be more accepting of people who are different than them, they are still young adults who are trying to figure out their own identities as well — and some of them aren’t as assured in who they are (and who they are). attracted to) as others. When it came time to introduce a new love interest for Chloe Bailey’s character Jazz, the writers decided to explore some of those nuances.

In Season 4 of the Freeform series, Jazz is at a tumultuous point in her college experience. Her twin sister de ella, played by her real-life sister Halle Bailey, has made it to the Olympics and left Jazz behind. She’s also recently broken up with her long-term college boyfriend and is navigating the dating world once again.

“So, we were really finding Jazz at a place in her life that we weren’t necessarily planning,” Moran said. “When we came into Season 4, we were feeling like, ‘What would this girl be feeling?’ This person who is normally so affirmed in her convictions of her and her beliefs of her.

Enter Des (Warren Egypt Franklin), a bisexual and genderfluid athlete on the track team. After he and Jazz spark a romantic connection, she finds herself being challenged on her own predispositions about gender when Des shows up to their first date of her wearing a dress.

“We figured that we were going to have this character who’s very outside of her comfort zone and we wanted to push her more outside of her comfort zone, and that is sort of where the idea of ​​Des came from,” Moran said. “Basically having her de ella develop this friendship and then feelings for this person that I think in seasons one through three, you wouldn’t have ever seen Jazz go for.”

He added, “So with Des, we wanted to take this genderqueer male character, and on the most basic part of it, in terms of the way he expresses himself, we wanted to make that the thing that Jazz couldn’t get past — to just sort of have her be like, ‘You know what? I actually can’t handle his queerness.’“ 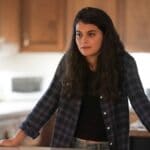 It’s not that Jazz doesn’t accept Des for who he is. In fact, the writers took extra care to make sure that the problem was only her own. As the season goes on and Des remains firm in her identity, Jazz realizes that she’ll need to work through her own insecurities if she wants to pursue the relationship.

“This thing ultimately is about her. It’s about her image of her when she is with him. And we decided to make that the hang-up that she had to explore over the course of the season,” Moran said. “Part of Jazz’s perspective is like, she knows that this is her issue of her. She says it to all of her friends of her. There’s that line where she’s like, ‘Before you all go in on me, I know that this is messed up that I feel this way.’ “

The good news for the Jazz and Des fans is that, by the end of the season, the pair seem to be rekindling their romance.

It’s the ending that her friends wanted for her as well, having nudged her throughout the season to step outside her comfort zone and explore her feelings for Des. But as any good friends would, they respected her space from her as she worked to get there on her own terms — which Moran said was another key aspect of nailing the nuance of the storyline.

“I think those different perspectives and the respect that they give each other very much comes out of our writers room too, because our writers room has so many different perspectives and so many different backgrounds,” he said. “We’ve had so many debates about so many topics over the course of the time I was on the show, but it’s like we always treated each other with a lot of respect. We always tried to hear where everyone was coming from, and I think you see that reflected in this show with this group of friends. They have their debates and their squabbles, but they’re a family.”

See also  Review of 'The King of All the World'