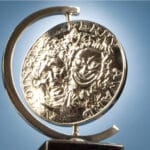 If you have assiduously avoided watching Fox News for the past few years, you can rectify that blessed omission in your life by watching Claudia Rankine’s new 90-minute play, “Help,” which opened Thursday at the Shed’s Griffin Theater. In her examination of “white dominance and the political crisis in US democracy,” Rankine lifts quotes from several Fox-friendly politicians and talking heads, including Lauren Boebert, Ann Coulter, Ted Cruz, Ron DeSantis, Newt Gingrich, Lindsey Graham, Marjorie Taylor Greene, Laura Ingraham, Ron Johnson, Kelly Loeffler, plus many others before she gets to the end of the alphabet with the Former Guy and his daughter, Ivanka Trump. Actually, there’s one more, but she’s dead: Martha Washington, who did not have much nice to say about the people who were her husband’s slaves.

“Help” began as an essay that Rankine wrote titled “Brief Conversations With White Men” and published in the New York Times a few years ago. That piece inspired 2,197 reader responses before, no doubt, the Old Gray Lady “closed” its comment section. I look at reader comments about as much as I look at Fox News, and now I know why. Rankine inserts quotes from these readers throughout “Help,” which is n’t so much a play as it is a speech delivered by April Matthis, who brings a detached standup-comic charm to the role of the Narrator, whose life, I’ m guessing, reflects Rankine’s from her.

Before we get to what Rankine tells us about herself through the Narrator, the real star of “Help” is not the playwright or Matthis but Taibi Magar. As the director, Magar puts on a real show that rivals in razzle-dazzle any musical about the apocalypse ever staged on Broadway. Although the operator of the fog machine is not credited, JJJJ Jerome Ellis and James Harrison Monaco deliver ominous music at opportune moments, accented by John Torres’s equally eerie lighting. Shamel Pitts’s choreography, on the other hand, recalls what Herb Ross did for Barbra Streisand when she sang “Miss Marmelstein” rolling across the stage on an office chair in “I Can Get It for You Wholesale.”

Magar lets Matthis pace the stage while Pitts has the seven Caucasian actors dressed in business suits (costumes by Dede Ayite) behind her spin around on airplane seats attached to rollers. We first see them locked in what appears to be an airport waiting room with windows separating them from us. (The amazing set design is by Mimi Lien.) A few minutes into Matthis’ opening speech, those windows lift so that Pitts’s choreography can take flight as the seven supporting players (they’re credited as White Man #1, White Women #1 , White Man #2 and so on) go full Busby Berkeley to form fascist symbols and designs of ethnic solidarity. The re-creation of the January 6 MAGA riot is especially breathtaking.

When White Man #7 (Jess Barbagallo), White Woman #2 (Charlotte Bydwell) and others of their race (David Beach, Tina Benko, Zach McNally, Joseph Medeiros, Tom O’Keefe, Rory Scholl, John Selya, Nick Wyman) aren’t repeating something once said by Brett Kavanaugh or Kyle Rittenhouse, they leave their airplane seats to impersonate the Former Guy impersonating a reporter with arthrogryposis. Are these jerky, spasmodic dances supposed to reflect the inner turmoil that white people experience when they’re attempting to disguise what they all are at their core, racists?

Confession time: I never talk to people sitting next to me on an airplane, and now I know why. Rankine appears to have spent her adult life in first class asking people sitting next to her how they feel about being white. Invariably, they answer they don’t think about it, a fact that reinforces their bigotry.

Early in “Help,” the Narrator tells us that 61% of white men voted for Trump. What she doesn’t tell us is that the further you went up the economic ladder, the more likely those men went for Biden. Yet on stage, we see nothing but suits. Did Rankine never get around to interviewing anyone blue collar in those international plane trips or in her classroom de ella at Yale? (She now teaches at NYU.) Matthis wears a kind of upscale jumpsuit that would not look out of place in any Amazon warehouse. 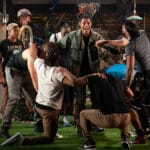 The Narrator’s interviews tend to provoke a patronizing sameness from white people that is bookended by two slightly more revealing conversations. One occurs early in “Help” when the Narrator calls out the racist perspective of her white female therapist (Benko, acting superior) and the other comes much later when the Narrator gets into a heated exchange on race with her white male spouse (O’ Keefe, acting even more smugly superior). The more the Narrator interviews people, the narrower her focus on her. Clearly, neither the therapist nor her husband voted for Trump, but in Rankine’s play, they’re considered just as hopeless — my word, not the playwright’s — as the Fox talking heads or Martha Washington.

“Help” ends with an emergency call: “There’s no swerving away from the supremacy of whiteness… the project of ‘educating’ white people has failed.” (The essay by the “highly trained, experienced and deeply committed social activist” Ruby Neil Sales in the Playbill make for even more fascinating reading: “I see whiteness as a culture that seeds and fertilizes spiritual malformation and social perversion everywhere.”) It reminded me of something I read in high school by Susan Sontag, who, with the exception of Shakespeare and a few other dead men, considered Western Civilization to be the worst thing that ever happened to the planet. Sontag always did sound like a revolutionist in the parterre box complaining about the tenor’s high notes. For Rankine, the revolution begins not in the opera house but in the first class section of a flight between the coasts.

More conciliatory words come from the show’s gifted director. “Theater has always asked us to step into the shoes of another,” Magar writes in the Playbill. In her hands, “Help” achieves precisely that. 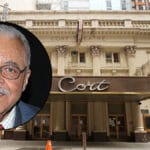