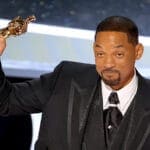 Howard Stern tore into The Academy for the Oscars telecast Monday after Will Smith was able to smack Chris Rock onstage without interruption.

“Will Smith walks up to Chris Rock and he open hand — with a lot of force — smacks him right in the mouth on TV. Now the first thing I said to myself, ‘What the f— is going on? Is this a bit?’ Because where’s security? This is a live television event. Not one person came out, because he’s Will Smith,” Stern said on his SiriusXM show Monday as he discussed the slap heard around the world with co-host Robin Quivers.

“This is this is how Trump gets away with sh–,” Stern continued. “Will Smith and Trump are the same guy. He he’s going to take matters into his own hands, you decide, at a time when the world is at war. Bad timing man. I mean just you know, calm your f—in ass down.”

Stern also suggested the incident showed off a double standard in Hollywood.

“Here’s Hollywood that so outraged by every little thing. Not one person got up and said, ‘Hold on. We got an out of control situation here,” Stern said. “Now this guy was allowed to sit there for the rest of the awards and he’s laughing it up and having a good time with his wife.”

On Sunday night, Rock was serving as an awards presenter when he made a joke about how he couldn’t wait to see Jada Pinkett Smith in “GI Jane 2.” Pinkett Smith suffers from autoimmune disorder alopecia, which makes a person’s hair fall out.

The actress was not amused by Rock’s joke as the live feed showed, although Will Smith was seeing it smiling initially. A moment later, Smith yelled at Rock, and then stormed the stage and slapped the presenter. 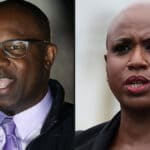 So, long walk up to Chris Rock. He didn’t stop and think twice about what he was about to do. Now that’s crazy. That’s crazy when you can’t contain yourself like that,” Stern said, turning his attention back to the Academy.

“But here’s the thing, here’s the thing: You don’t provide security? You don’t have somebody come out?” Stern said. “P-Diddy comes out afterwards and the show must go on and, hey, those guys are gonna settle it out back? I’m sorry a man was assaulted on live television.”

According to the Los Angeles Police Department, Rock declined to file a police report on the incident.

“Once Will Smith got out of his chair — and I don’t know who’s doing security there, they should be brought up on charges too, man — when you see a guy crossing the line, you come up and you grab him,” Stern said.