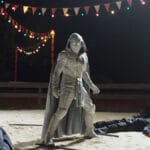 The opening scene of “Moon Knight” doesn’t introduce the MCU’s newest hero, but rather, its villain: Arthur Harrow. And indeed, the scene is harrowing (sorry), as we see him smash a glass, only to put the shards into his shoes — an idea that Ethan Hawke, who plays the man, came up with himself.

“That idea came from me trying to figure out my character. And I was trying to figure out what was his secret about him? Hawke explained to TheWrap. “You know, a lot of deeply spiritual people you find out later — like St. Francis and other people — would wear a hair shirt or do strange things to overcome suffering, right? And so I thought, what if this guy secretly poured glass in his shoes from him? I don’t exactly know how the idea came to me.”

You can watch Hawke’s full breakdown of the scene with TheWrap in the video above.

Once Hawke had the idea fully formed, it was just a matter of getting Marvel to say yes, which they did very quickly. What Hawke didn’t know was that it would be used as one of the establishing shots of the entire series.

“I had this kind of vision. I pitched them that, ‘What if he was listening to Bob Dylan and pouring glass in his shoes from him?’ And the whole Marvel team loved the idea,” he continued. “I kind of thought of it as a single page portrait in a graphic novel, like, what would that be? And so we just shot it, and we weren’t sure what we’re going to do with it. And then they decided to open the series on it. But I think it gives the villain a little strangeness.”

And for those concerned, no, of course Hawke didn’t actually put real glass in his shoes to film it. It was sugar glass, as is typical in scenes where glass is required to break.

“It’s not comfortable, but it doesn’t cut,” Hawke noted. I’m not that dedicated to my craft.”