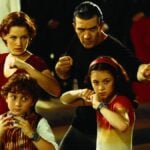 While Netflix is ​​rolling out plenty of original content in April, it’s also breaking hearts by removing a myriad of Oscar-nominated classics from its slate this month.

“The Shawshank Redemption,” “The Artist,” “Moneyball,” “August: Osage County” and Sean Baker’s indie darling “The Florida Project” are just some of the Academy Award nominees of years’ past that are leaving the streamer. Other acclaimed drama titles facing the chopping block include “Léon: The Professional,” “The Killing of a Sacred Deer” and “Miss Sloane.”

For the hopeless romantics out there who rave about underrated gems, “About Time” and “Dear John” will leave the platform April 15 and 30, respectively. Oh, and if you were looking to binge or rewatch all seven seasons of “Star Trek: The Next Generation,” time is of the utmost importance. Additionally, all six seasons of “Dawson’s Creek” are also leaving Netflix this month.

Check out the full list of titles leaving the streamer below.

Leaving April 4
The Killing of a Sacred Deer

Leaving April 8
House of the Witch